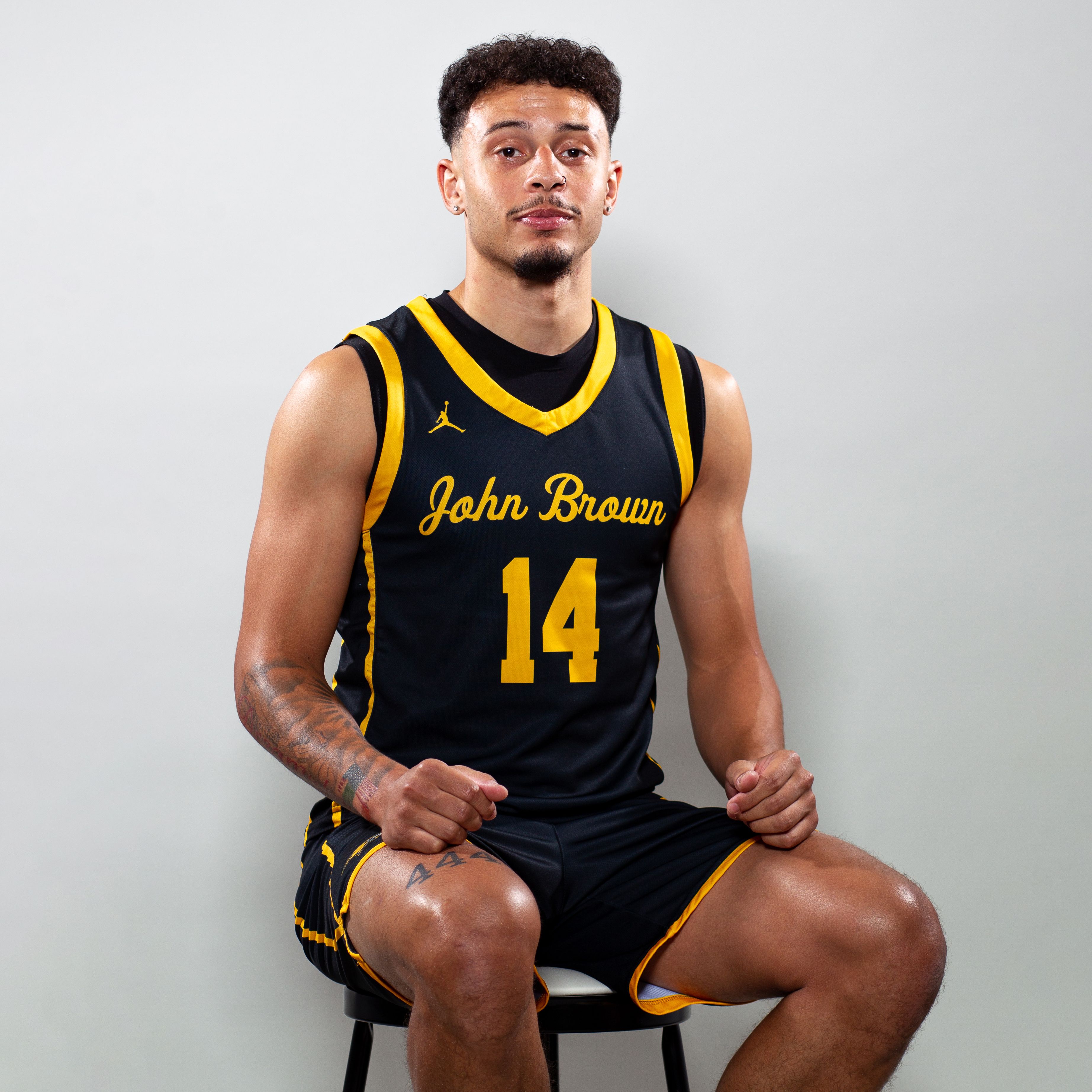 Posting a double-double in a reserve role is a rare achievement. Rarer still is to do so twice in the same week. That’s where James Beckom comes in. The 6-3 swingman from Cork had the distinction of two double-doubles as John Brown University enjoyed a reversal of fortunes via victories over Science & Arts of Oklahoma, 90-63, in Chickasha, Okla. on Thursday and Texas Wesleyan, 83-79, in Siloam Springs, Ark. on Saturday in men’s basketball.

Beckom played 23 minutes against S&A, scoring 14 points and hauling down 10 rebounds, a team high. He made six of 14 field goal attempts and two of three free throws. His 10 rebounds against Texas Wesleyan were high for the Golden Eagles. He added 19 points to the mix, shooting 6-of-12 from the field and 7-of-10 from the foul line. JBU improved to 6-13.

Felician rode a game-high 19 points from Sean McCarthy to snap a six-game losing streak by defeating Chestnut Hill, 80-72, in Rutherford, N.J. on Saturday. The 6-6 sophomore forward from Cork accounted for half of his production at the foul line, where he sank nine of 12 chances. He also poured in five of nine shots from the floor and grabbed a game-high 11 caroms. On Wednesday, the Golden Falcons got whipped, 87-63, at home by Post. McCarthy posted a team-high eight boards and scored 12 points on 3-of-9 shooting from the field and 6-of-7 at the line. Felician is 5-13.

Ryan Leonard scored a game-high 23 points to lead St. Mary’s (Tex.) past Texas-Permian Basin, 69-59, in San Antonio on Saturday. The 6-4 senior from Tralee, Co. Kerry deposited eight of 10 shots from the field (five of seven from deep waters) through the rim as well as both his free throws. He also took down five rebounds and dished four assists. The Rattlers are 9-8.

James Thomas Phelan had a pair of 19-point games for Thomas (Maine) last week. In Tuesday’s 90-79 win over Maine Maritime in Castine, Maine, he knocked down six of 10 attempts from the floor, including three of five from Kennebunkport, and four of five foul shots. Seven rebounds and five assists flushed out a robust stat line. Saturday’s road loss, 102-87, to Northern Vermont-Lyndon saw the 6-3 freshman from Portlaoise, Co. Laois hit six of 14 field goal attempts (three of seven from a maple tree farm) and all four of his free throws. The Terriers are 3-13.

Lafayette got typical solid efforts from C.J. Fulton as they split a pair of road games, defeating American, 70-59, on Wednesday and falling to Lehigh, 61-49, on Saturday. Fulton, a 6-2 sophomore guard from Belfast, had game highs in assists (seven) and steals (six) while scoring eight points and grabbing four caroms in the American victory. Against Lehigh, he scored 12 points, took down five boards, assisted on three buckets and committed two thefts. He shot 5-of-11 from the floor and 2-of-5 from downtown. The Leopards are 6-15.

ND Okafor and Sam Alajiki excelled in shot selection, although it did California little good in an 87-58 trouncing at the hands of Oregon in Berkeley on Wednesday. Okafor, a 6-9 freshman, made all five of his field goal attempts to put 10 points on the board, while Alajiki, a 6-7 sophomore, scored on four of his seven shots, including one of three from long range, for nine points. They both hail from Dundalk.

Grand Canyon came up shorthanded for Saturday's home tilt with Utah Valley, so Aidan Igiehon received a rare start in what resulted in a 76-74 Lopes loss. The 6-10 junior from Clondalkin, Dublin led the Lopes (13-7) in rebounds with eight, while chipping in three points. He also registered two rejections.

Sanmi Fajana had a productive 20 minutes on the floor as Wis.-Parkside lost, 90-82, to Purdue Northwest in Hammond, Ind. on Saturday. The 6-8 sophomore out of Dublin scored nine points, cashing on four of five shots from the field and one of two free throws. He also received credit for five rebounds and three assists as the Rangers fell to 13-6.

Eli Lenihan was good for 10 points in Spring Hill’s 89-75 loss to LeMoyne-Owen in Mobile, Ala. last Monday. The 6-5 Cork sophomore nailed three of six field goal attempts, including two of three from the Gulf of Mexico, and both of his foul shots. Four rebounds came his way, he set up four buckets and twice liberated the ball from the other team. The Badgers dropped to 7-11.

DeSales brought its undefeated record to Hoboken for a MAC Freedom showdown with Stevens and left a little bit humbler, although Abigail Rafferty did her utmost to avoid that. In the 49-48 loss, the 6-1 junior from Dungannon, Co. Tyrone poured in a team-high 14 points, hitting seven of 20 shots from the floor, and amassed a team-high 18 rebounds, along with four rejections and three steals. DeSales is 16-1.

Deborah Ogayemi worked out a double-double in a 71-65 Texas-Rio Grande Valley loss to Texas-Arlington in Edinburg, Tex. on Thursday. The 5-11 sophomore from Waterford scored 11 points, having shot 4-of-6 from the field and 3-of-3 from the foul line. She also reeled in 14 rebounds. Saturday’s 69-65 road loss to Abilene Christian yielded nine points from Ogayemi on 4-for-8 shooting from the floor and 1-for-1 from the line, along with eight rebounds as the Vaqueros fell to 7-11.

Holy Cross remains undefeated in 2023 and stretched their win skein to eight with wins over Colgate, 59-49, in Hamilton, N.Y. on Wednesday and Bucknell, 69-50, at home on Saturday. Bronagh Power-Cassidy led the Crusaders with 19 points in the Colgate triumph. The 5-10 sophomore from Dublin knocked down seven of nine field goal attempts, including one of two from long range, and four of six foul shots. She also blocked three shots. In the Bucknell win, she scored 12 points, half of which came at the foul line, where she didn’t miss. She also got credit for four assists. The Crusaders are 16-3 overall and 8-0 against Patriot League foes.

Lucy Coogan was an offensive force for Caldwell in victories over Bloomfield, 61-48, on Tuesday and Wilmington (Del.), 73-35, on Saturday. The 6-foot frosh from Kilkenny scored 16 points in the Bloomfield win on 6-for-14 shooting from the floor plus 4-for-6 from the foul line. She took down five rebounds and blocked two shots. She scored 14 points in the Wilmington blowout on 6-for-11 shooting from the floor, including two successful three-point launches. She also grabbed four boards as the Cougars improved to 9-9.

Enya Maguire contributed eight points in Houston Christian’s 71-52 win over Incarnate Word in Houston on Thursday. The 5-4 junior guard from Belfast shot 3-for-5 from the floor, including 2-for-4 from Hobby Airport. She also set up a pair of baskets. HCU is 8-10.

Katie Williamson’s 18 points weren’t enough to prevent Southern Connecticut State from losing, 74-63, to Le Moyne at home on Wednesday. The 6-1 junior forward out of Dublin shot 50 percent from the floor, making nine of 18 attempts. She also collected six caroms. The Owls are 10-7.

Mona McSharry won the 100-yard breaststroke to help Tennessee defeat Georgia, 183-117, in a dual meet in Knoxville on Saturday. The junior from Grange, Co. Sligo completed her laps in 59.74. She also swam second leg for the Lady Vols’ winning ‘A’ team in the 200-yard medley relay.

Ciara McGing scored three points for Ohio State off the one-meter board in a dual meet with bitter rival Michigan in Ann Arbor, Mich. on Saturday. The Dublin junior received 303.68 points from the judges to finish third. The Buckeyes used those points to return to Columbus victorious, 186.5-113.5.