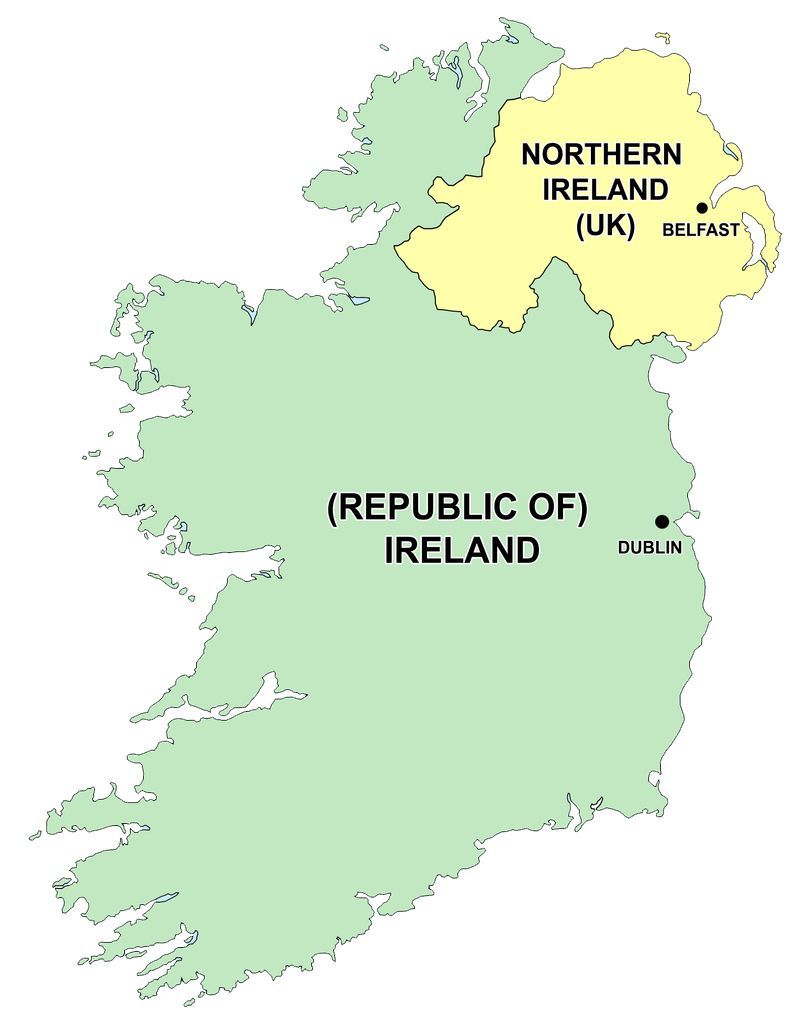 The border still exists but attitudes towards its existence are shifting.

2022 was an interesting year politically, particularly around the changing attitudes about the relationship between the different parts of the "United Kingdom of Great Britain and Northern Ireland."

Methinks 2023 will be just as interesting.

But for all the positive shifts in public opinion on the constitutional future for the people of this island there is still an embedded awfulness about the plight of homeless people, the poor and disadvantaged. This is no accident. A government in Dublin wedded to policies which advantage their friends in high places has made little impression on the crisis in public services, especially the health services and the lack of affordable housing. Partition and the absence of a real national democracy have perpetuated this imbalance.

Thank God for those brave souls who struggle within our public services to mind the sick and elderly who depend on these services. They deserve better. Neo-liberalism is the problem. That is capitalism by another name. Citizens deserve rights. Neo-liberalism and its political supporters are against this.

They are against citizens having the right to a home, a genuinely public health service and other fundamentals, including workers rights. To achieve these fundamental entitlements will require a government and a popular movement wedded to these rights. Change is needed. Change is desired by the majority of people. Change is possible. In fact change is already happening.

We need to intensify and popularize these demands so that market forces will no longer determine the shape of society based on how much profit will be garnered for big business and other vested interests. A truly democratic society should be citizen centered and rights based. We need to form alliances and coalitions to bring this about.

Political struggle was always more challenging in the North given the divisions, including the partition of our land. Nowadays the absence of the northern Assembly and other Good Friday Agreement structures, and London’s toxic and malign role in our affairs, exacerbates this. But, here too, change is happening. And attitudes are evolving. This is particularly the case within civic society.

It is difficult to figure out precisely how many of those who have shifted their position during 2022 on the constitutional question have done so because of their desire to have an influence on social and equality issues.

However, the contributions of some participants at "Ireland’s Future" events and Sinn Féin’s "Commission on The Future of Ireland" give some insights and causes for hope. So does the growing body of literature and academic studies devoted to examining the potential for a new society in Ireland. This is particularly the case with the small but highly articulate groups of citizens from unionist backgrounds.

The arguments being advanced by them illustrate how and why they have ceased to be unionists and are now, some of them anyway, united Irelanders. Some of them were converted by their desire to live in a rights based society, and by their discovery that London rule and the Union do not provide this.

They want the right to self determination and the ability for us to properly govern ourselves instead of being governed by a self serving clique in London.

The majority of unionists, for various reasons, remain wedded to the connection with London. The rest of us, in varying degrees, detest this terribly unfair union and all its malign consequences. So the division of opinion is deep. But there is now movement towards democratic options. Not an inch doesn't work anymore as well as it used to.

Everyone now knows that the future will be determined by the people by way of referendum. Those who are against change will not want to engage with this. Or to plan or prepare for this. But they know that the referendum is on its way.

So despite their refusal to embrace this, the reality is that we are all now into a new phase and everyone will find themselves increasingly having to respond to this. Saying NO will not work anymore. It may delay change. It will not stop it. Other responses will be required.

So, now is the time for a generous enlightened phase of persuasion led by those who are embracing change. This means reaching out to others who are open to persuasion. Linking social and economic rights and the provision of public services as a necessary part of our new, re-imagined political dispensation will be a crucial part of this process. A progressive inclusive truly democratic rights based society will benefit all of us, across every part of this island.

And so back to my wee William Lutton book of Ulster Dialect words. Regular readers will recall that William Lutton collected words and phrases mostly used in the Montiaghs, a district close to Lurgan in County Armagh.

My copy of Montiaghisms  was reprinted in 1976 by The Linen Hall Library. It was first published in 1923. It is a wee dictionary of Ulster dialect words and phrases collected by William Lutton and edited by Francis Joseph Biggar. Lutton was born in 1807 and died in 1870.

Here is another sample of his notations for your entertainment and consideration.

Daunder= to walk about slowly and idly.

Dinge = the impression made by a blow on a malleable surface.

Farl = the fourth part of a cake of bread.

Fiz = a tumult or uproar.

Foother = to do any work or business in an unskilled manner.

Go = a large amount of anything.

Gern = to make a wry face, to cry quietly.

Hunker = to squat down.

Jaap = to use carelessly.

Jagg = a slight stab of a pin or a thorn.

A lash = a large quantity.

Let on = to divulge a secret.

Luck penny = in a bargain a small amount returned to the purchaser.

One of the highlights of 2022 was the street campaign for Acht na Gaeilge led by An Dream Dearg. Thank you. Míle buiochas daoibhse.  There is a lot more to be done to deliver and advance Irish language rights across this island. But 2022 was a good year for Gaeilgeoirí. The good health and potential revitalization and growth, against all the odds, of our language is due to the diligence and determination of multitudes of great people over many decades of struggle. We are indebted to them all.

But 2022 should be marked down as the year when we eventually got rid of the last of  England’s Penal Laws imposed upon us in 1737. Well done An Dream Dearg and everyone else for bringing color, vitality, good humor, cheerfulness, success and fun to this achievement. Leanaghaí Ar Aghaigh.