Home Opinion ADAMS: Be Prepared For Even More Stupidities 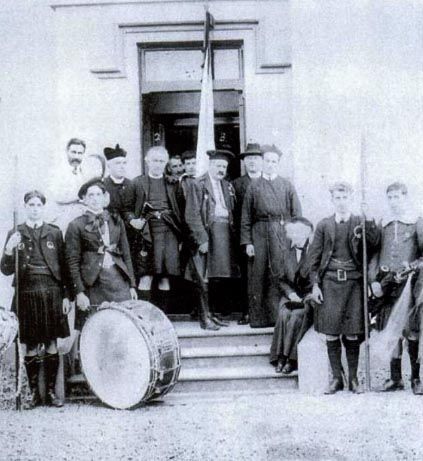 On the steps of Ardrigh circa 1914: Bigger (center), Roger Casement (back row, left) and what is thought to be members of Na Fianna Éireann.

ADAMS: Be Prepared For Even More Stupidities

I considered ignoring the British government’s exclusion of the Sinn Féin President from the recent talks. Then I thought why should I? Stupidity like this needs to be highlighted. For me it is proof, once again, of what democrats here are up against.

This column could analyze the statements from the current British Secretary of State and the Foreign Secretary with the wonderfully inaccurate surname. But I will let you do that yourselves if that is your want. Suffice to say that every statement was even stupider than the one which preceded it.

So, I don’t intend to take us through all the he said/she said bits of this most recent debacle except to say that Mary Lou McDonald has spelt out the democratic position in her usual articulate way and Leo Varadkar sounded as weak as water with his "I hope this is a one-off and that it doesn’t represent a change of policy."

Ach taoiseach, surely you can do better than that!

This is exactly what you should not be saying.  Hope shouldn’t come into it. The fact is the British government dictating who should represent a political party - any political party - means there is no hope of inclusive talks. The taoiseach needs to make that clear to the British prime minister.

So what does this recent stupidity mean? It means that this is the mindset of this British government. It decided who could attend talks. Because it thinks it can. Proof again that it is against the Good Friday Agreement. That it has no real investment in it. And it is evidence that the Tories have no notion of delivering on their obligations under the Agreement in a positive and good faith manner. That is the reality which all democrats have to face up to.

I am rarely really surprised by British stupidity towards Ireland.  Even a benign British government has its lapses. The English establishment doesn’t understand Ireland. How could it? I don’t understand all the sensitivities of the English condition. But then I’m not trying to rule the English. They quite rightly do that themselves.

That means An Taoiseach and Tánaiste, our friends in the USA, and the wider international community. And the EU.

Of course, this British government can and will be moved to honor its obligations. That is the real-politick. But, as we have just seen, it will do this awkwardly and in a minimalist way.

I am rarely really surprised by British stupidity towards Ireland.  Even a benign British government has its lapses. The English establishment doesn’t understand Ireland. How could it? I don’t understand all the sensitivities of the English condition. But then I’m not trying to rule the English. They quite rightly do that themselves.

Unfortunately, they also think they should govern us. They have no mandate for this. But because they believe they are superior they don’t have any incentive not to be stupid. They don't need to take us or our democratic rights into account. That's the stupidity of their position, and the reason for the exclusion of Mary Lou.

But we can end British stupidity by replacing it with self rule by the people who live here. That is our right. At the core of the British current machinations and Unionist contradictions is their refusal to give us that right.

They have already signed up for that principle. But let’s expect no favors from them about its delivery. It’s up to us to create the conditions wherein we exercise our right to self determination. That day is coming.

If we proceed, as we must, we must do so intelligently. So let’s go forward in that knowledge but in a positive and generous way reaching out to others who share our intention of making this a better place for everyone who lives here. But be prepared for more stupidities en route.

For the last few months I have been revisiting many of the oul words that used to be in common usage in times past. My source for many of these was a copy of a book of Montiaghisms written by William Lutton in 1923. The title of the book comes from a district close to Lurgan – the Montiaghs – where Lutton picked up many of the Ulster dialect words. He wasn’t alone in this. Other writers of the period, especially Francis Joseph Bigger, also had an interest in and made use of words that today are no longer used.

The copy I have of Lutton’s book was reprinted in 1976 by the Linen Hall Library, but the first edition was published exactly one hundred years ago. It was edited by Francis Joseph Bigger.

Bigger was centrally involved in many of the events that shaped Ireland at the turn of the last century. From a Presbyterian family in Mallusk he was a lawyer, gaeilgeoir, historian, folklorist, archaeologist, naturist, gardener, bee keeper, and conservationist. He was also a close friend of many of those who through the Irish Republican Brotherhood planned and participated in the 1916 Rising and subsequent events.

He was a friend to Bulmer Hobson – who founded Na Fianna Éireann in Belfast with Countess Markievicz – with Pádraig Pearse and other leading republicans of the time. He was especially close to Roger Casement, who stayed frequently at Ardrigh, Bigger’s home on the Antrim Road in North Belfast.

Bigger was born on July 17, 1863 in Little Donegall Street which runs from Carrickhill down to Library Street and on to Royal Avenue in Belfast. He wrote several books and hundreds of articles on Irish history and archaeology, as well as contributing to local newspapers. When he joined the Gaelic League in the 1890s he came to know Douglas Hyde and Eoin McNeill.

In the late 19th and early 20th century the enormous impact of the great hunger, the decimation of the Irish language and culture, urban migration from the rural areas to Belfast and Dublin, and the economic difficulties facing rural communities were all causing huge problems across the island. Bigger believed that the revival of the Irish language and culture were important in meeting these challenges.

In 1898 he was pivotal in organizing the centenary celebrations of the 1798 rebellion. He went on to organize pageants, ceilidhs and féiseanna. Prominent among these was the creation of Féis na nGleann in the Glens of Antrim. Bigger was a regular visitor to the area and he was very taken by its poetry, song, dance and craft. Along with others in 1904 he helped found the Féis which is still going strong over a century later. Bigger believed that the preservation and promotion of our native language, culture and sport would help encourage our sense of national identity.

Among his many other accomplishments was the founding of the Irish Folk Songs Society, the Ulster Public House Association, the Ulster Literary Theatre and the organizing of the Irish Harp Festival in 1903. Bigger sought to identify the graves of Robert Emmet and Henry Joy McCracken and was among those who placed a huge granite boulder above what is believed to be the grave of St. Patrick in Downpatrick. Bigger also assisted many musicians with their careers among them the Uilleann piper Francis McPeake ('Da' McPeake), of the McPeake family.

Bigger’s home was a favorite meeting place for those involved in the cultural revival at the turn of the 19th and 20th centuries. Writers, artists and musicians were regular visitors. According to one historian, Roger Dixon, Ardrigh was known as "the most hospitable house in Ireland." The importance of Francis Joseph Bigger is not as appreciated today.

I am pleased to have this opportunity to remind readers of this influential Belfast man. I often wonder how he and other progressives from northern Protestant stock survived the partition of Ireland and the calamities which followed it. Bigger himself died in 1926.