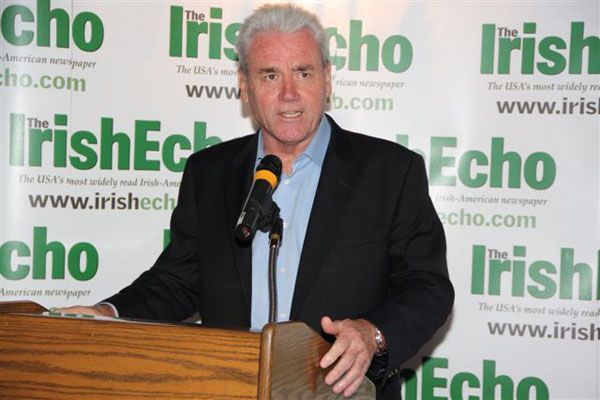 Secretary of Labor Marty Walsh has joined former Sinn Féin President Gerry Adams to congratulate Terry O’Sullivan on being named the Irish Echo’s Irish Labor Leader 2022. The 12th annual Irish Echo awards will be presented this evening in the Edison Ballroom in New York in front of a full house.

Labor Secretary Marty Walsh, who will make his first official visit to Ireland as a member of President Biden's cabinet next week, said he was delighted to see Terry O'Sullivan's lifelong commitment to the cause of trade unionism recognised.

“I'm thrilled to congratulate my friend and General President Terry O’Sullivan for receiving the 2022 Irish Labor Leader of the Year Award," he said in a video message to the event.

“I also want to thank my friend Máirtín Ó Muilleoir and his team at the Irish Echo for honoring the labour movement and recognising Terry's amazing body of work.

“I am a life- long member of the laborers union, LIUNA, of which Terry is our president.
That's because when my father immigrated from Ireland, the laborers union gave him an opportunity and allowed my family to join the middle class. That's why I'm here today.

“And that's why I'm grateful to be part of the Biden administration that believes in and supports organised labor. And I'm grateful that LIUNA has a leader like Terry, who, for over 20 years, has worked to bring these opportunities to more workers from all across our communities. So thank you, Terry, and congratulations once again. Congratulations to all the honorees tonight.

“And thank you for gathering to celebrate the important life changing work of the labor movement. “
Meanwhile the former Sinn Féin leader, Gerry Adams has recalled Terry’s work in protecting the Good Friday Agreement and his friendship with the city of Belfast.

In a pre-recorded address to be screened at the event, Mr Adams said: “This year is the 12th year of this important annual social event in the life of Irish America and of the trade union movement," he said. “Each year these awards are brought together and bring together the leaders of American Labor. They celebrate your extraordinary hard work and diligence in the cause of Labor.

I’m in New York at Irish Echo Labor Awards.This is my ninth year speaking at these awards:”Your struggle here & our struggle in Ireland share the same objectives.
We fight in common cause for liberty and equality – for the rights of working people and for a better life for all.” pic.twitter.com/Zzqt8SpMll

“But tonight is Terry O’Sullivan’s night.  He is the Irish Labour Leader of 2022. Well done and well deserved Terry. I know your father Terry Sr. and your mother Leona were enormously proud of your achievements. So is the rest of your family and your wife Yvette. Well done to you all.”

Mr Adams said that along with others in the leadership of the American trade union movement, Terry O’Sullivan has kept alive the spirit and the legacy of James Connolly.

“In 2016, Terry unveiled the statue to James Connolly on the Falls Road in Belfast and with other union leaders he was present in April 2019 when Áras Uí Chonghaile – the James Connolly Visitor Centre – was formally opened by President Michael D Higgins.
In July this year Terry O was with us again in Ireland to honour our friend and comrade Rita O’Hare and also to rebrand the conference hall in Aras Uí Chonghaile as the Terry O’Sullivan LiUNA Conference and Event Suite."

The support of Irish trade union leaders across the US has made a huge difference to fortunes of the @IrishEcho over recent years. I look forward to our sold-out annual awards night this Thursday in New York. Stellar line-up. #IrishLabor pic.twitter.com/7IHAzXx3II

“As General President of LiUNA, Terry O’Sullivan has been at the heart of these campaigns.

“He has been General President of the Laborers International Union of North America since 2000 and in that time he has also fearlessly campaigned for the increased investment in America’s infrastructures, he’s fought tirelessly for fair wages and conditions for his members and worked diligently to provide good union job opportunities for communities.

“Terry brings that same passion and conviction to his support for Irish Unity and the new future for the Irish people. We salute him.”