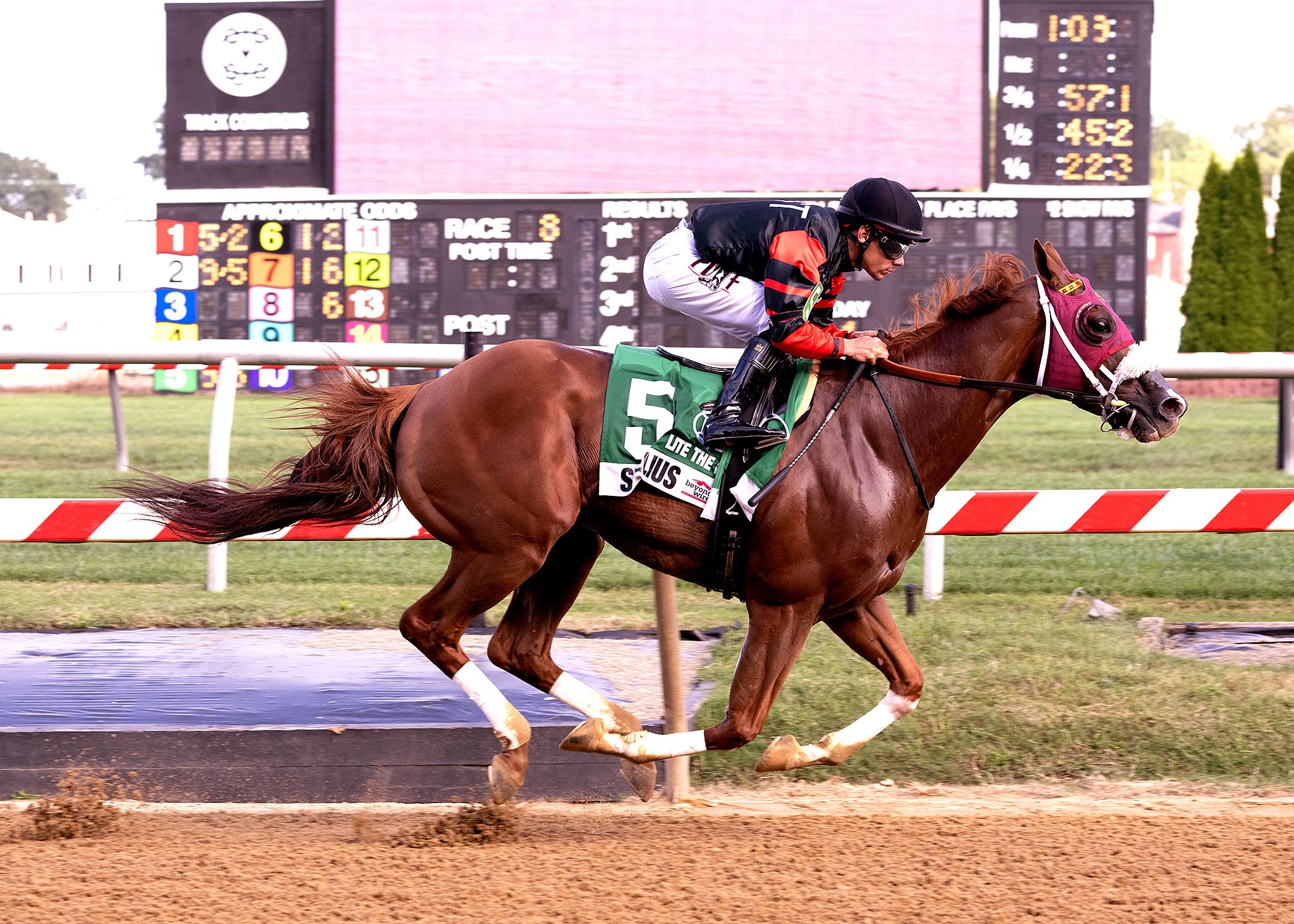 Jun Park and Della Nash’s Sibelius showed Jerry O’Dwyer enough in winning a second-level allowance sprint at Saratoga in August to take a crack at the Lite the Fuse Stakes at Pimlico on Saturday. The 4-year-old gelding completely dominated this six-furlong sprint, reaching the wire seven lengths in front under Junior Alvarado’s encouragement. Sibelius paid $5.80 to win.

“It was a great effort by him today,” said O’Dwyer of Sibelius. “He’s a 4-year-old now and I think this is his year. He’s put it all together.”

O’Dwyer suggested that the Phoenix Stakes at Keeneland next month might be next for Sibelius.

Trainer Phil D’Amato has a new line of Irish-bred troops ready to contend in southern California, which was readily apparent in Saturday’s Juvenile Fillies Turf at Del Mar. He saddled three Irish-bred 2-year-old fillies, getting a win and a third-place finish.

The victory came on the heels of Comanche Country, owned by a large partnership, which rallied under Umberto Rispoli to win this turf mile by just over a length. She paid $6.60 to win.

Comanche Country ran twice against maidens at Naas for Andrew Kinsella this past spring without success. Yet she showed enough to warrant a purchase by her current connections for whom she broke her maiden at Del Mar in late July.

Third place in the Juvenile Fillies Turf went to Excelia, which had been with Joe O’Brien in Ireland, where she notched a victory from five attempts. This was her American debut and she finished two and one-half lengths behind the winner after disputing the pace much of the way.

D’Amato’s other Irish-bred import, Thebestisyettobe, ran a nonthreatening eighth as the slight 2-1 favorite. She’d broken her maiden at Gowran Park for Emmet Mullins before being whisked to the U.S.

Pat Gallagher closed out the Del Mar meet with a win on Sunday. US Equine’s Angel Nadeshiko, a 3-year-old filly, toughed it out down the lane amidst bumping to defeat the heavily favored Bob Baffert entrant by a head. Victor Espinoza rode the winner, which ran off a string of three runner-up finishes at Santa Anita during the spring before running fifth when stretching out to a mile on the lawn at Del Mar. She paid $33.20 in winning this sprint on the dirt.

Colonial Downs closed out its meet with plenty of stakes races and Fergal Lynch got a slice of the action. He romped by almost seven lengths aboard Gigante for Steve Asmussen in Tuesday’s Kitten’s Joy Stakes, a route race on the lawn. The win mutuel came back $12.60. On Wednesday, he got up by almost a length on Spun Glass for Michael Trombetta in the Camptown Stakes, a turf dash. Spun Glass, the favorite, paid $4.60 to win. Lynch finished the meet ninth on the jockey table with 11 wins from 74 mounts.

The Tally-Ho Stud of Mullingar, Co. Westmeath earned another feather for their cap when Stonestreet Stable’s Campanelle won the Mint Ladies Sprint Stakes, a Grade 3, at Kentucky Downs on Saturday. The 4-year-old Irish-bred filly, trained by Wesley Ward, tracked the early pace and then battled the length of the stretch to prevail by the narrowest of margins under Irad Ortiz, Jr. She paid $3.56 to win as the heavy favorite.

Earlier on the card, Henrietta Topham ran a good fourth in the Ladies Turf Stakes, a Grade 3 mile, her first attempt at a graded stakes race. The Geoff Mulcahy trainee settled just off the early pace and couldn’t make up ground when the real running began. She just got nosed for third place in a race won by Dalika, which came in here off a win in the Grade 1 Beverly D last month.