Home Opinion President Biden on the 21st anniversary of 9/11 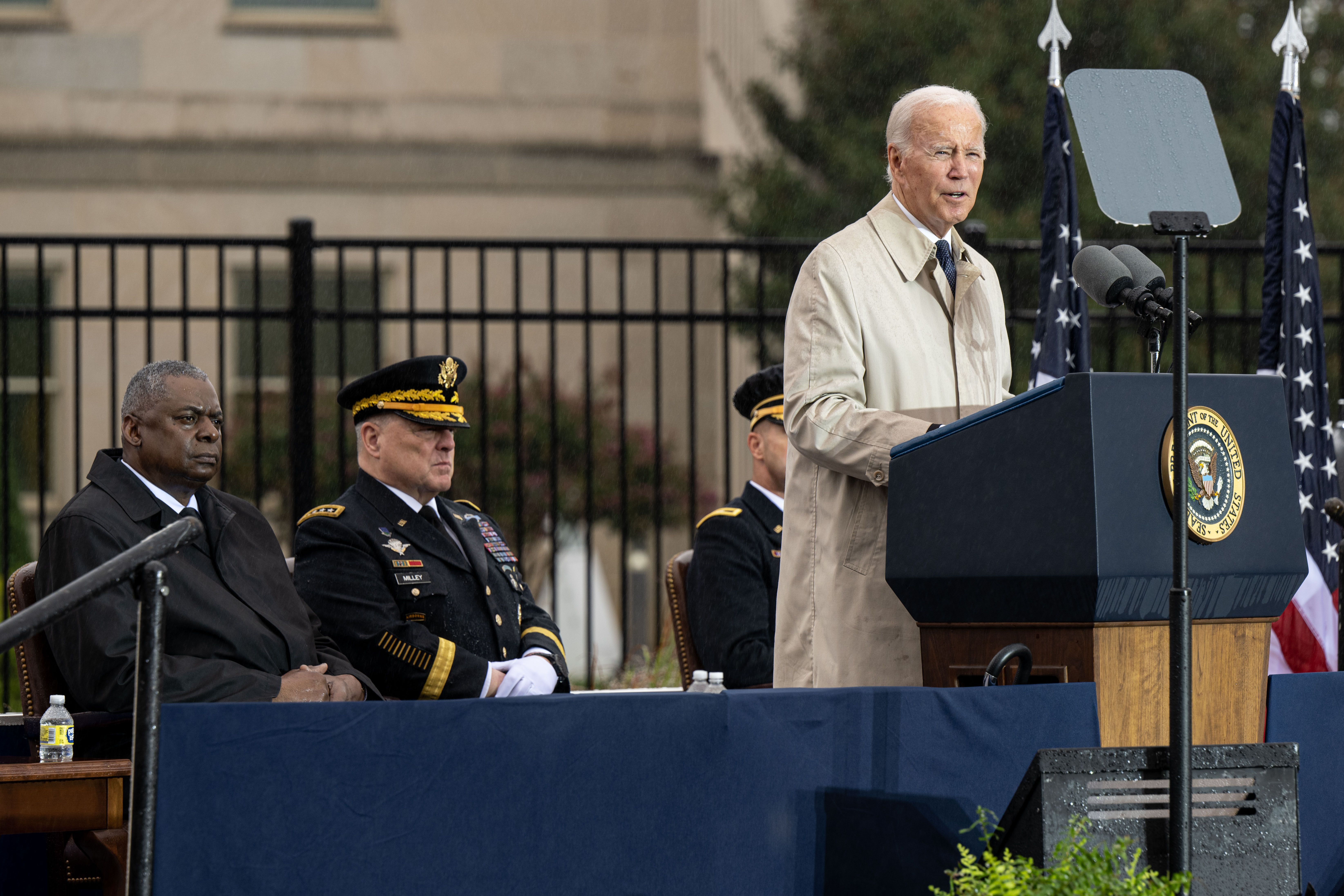 President Biden on the 21st anniversary of 9/11

Here are edited remarks by President Joe Biden at a 9/11 commemoration at the Pentagon on Sunday, September 11.

Twenty-one years ago - twenty-one years, and still we kept our promise: Never Forget. We’ll keep the memory of all those precious lives stolen from us - 2,977 - at Ground Zero in New York; in Shanksville, where my wife is speaking now - in Pennsylvania; 184 of them here at the Pentagon.

And I know, for all those of you who lost someone, 21 years is both a lifetime and no time at all.

It’s good to remember. These memories help us heal, but they can also open up the hurt and take us back to that moment when the grief was so raw.

Grief is the price we pay for love. Many of us have experienced that grief, and you’ve all experienced it.

And on this day, when the price feels so great, Jill and I are holding all of you close to our hearts.

Terror struck us on that brilliant blue morning. The air filled with smoke, and then came the sirens and the stories — stories of those we lost, stories of incredible heroism from that terrible day.

And what is that character?  The character of sacrifice and love, of generosity and grace, of strength and resilience.

In the crucible of 9/11, in the days and months that followed, we saw what stuff America is made — Americans are made of. Think of all of your loved ones, particularly those on that flight — ordinary citizens who said, “We will not let this stand,” who risked and lost their lives so even more people would not die.

We saw it in the police officers and firefighters who stood on the pile at Ground Zero for months amid that twisted steel and broken concrete slabs, breathing the toxins and ash that would damage their health, refusing — refusing to stop the search through the destruction.  They never stopped and would not.

We learned about the extraordinary courage and resolve, as I said, of the passengers on board Flight 93, who understood that they were living the open — they were there in the middle of the open shot of a new war, and who chose to fight back — not professionals — to fight back, sacrificing themselves, refusing to let their plane be used as a weapon against even more innocents.

And here at the Pentagon, which was both the scene of the horrific terrorist attack and the command center for our response to defend and protect the American people, so many heroes were made here.  So many of your loved ones were those heroes.

It began almost immediately, with civilians and service members leaping to action as the walls collapsed and the roof began to crumble. They raced into the breach between the fourth and fifth corridors.

The impact created by the fire raged at twice the heights of this building.  I remember.  I was a U.S. senator walking up to my office, and I could see the smoke and flames. They were heroes. They went back into those soaring flames to try to save their teammates.

Firefighters battled the blaze of jet fuel long into the night, pushing past the bounds of exhaustion.  Pentagon staff showed up to work on September 12th more determined than ever to keep their country secure.

As I said when I was up on 9/11, we will follow them to the gates of hell to be sure that they’re not able to continue.

And millions of young men and women from across the nation responded to the 9/11 attacks with courage and resolve, signing up to defend our Constitution and joining the greatest fighting force in the history of the world.

And in the years since 9/11, hundreds of thousands of American troops have served in Afghanistan, Iraq, and so many other places around the world to deny terrorists the safe haven and to protect the American people.

And to all our service members and their families, our veterans, our Gold Star families, all the survivors and caregivers and loved ones who have sacrificed so much for our nation: We owe you. We owe you an incredible — an incredible debt, a debt that can never be repaid but will never fail to meet the sacred obligation to you to properly prepare and equip those that we send into harm’s way and care for those and their families when they come home — and to never, ever, ever forget.

Through all that has changed over the last 21 years, the enduring resolve of the American people to defend ourselves against those who seek us harm, and to deliver justice to those responsible for attacks against our people, has never once faltered.

It took 10 years to hunt down and kill Osama bin Laden, but we did. And this summer, I authorized a successful strike on Zawahiri, the man who bin Laden — was his deputy on 9/11 and was the leader of al Qaeda.

And 20 years after Afghanistan is over but our commitment to preventing another attack on the United States is without end.

Our intelligence and defense and counterterrorism professionals in the building behind me and across the government continue their vigilance against terrorist threats that has evolved and spread to new regions of the world.

We’ll continue to monitor and disrupt those terrorist activities wherever we find them, wherever they exist. And we’ll never hesitate to do what’s necessary to defend the American people.

What was destroyed, we have repaired. What was threatened, we fortified. What was attacked — the indomitable spirit — has never, ever wavered.

We raised monuments and memorials to the citizens whose blood sacrificed on these grounds, and in Shanksville and Ground Zero, to keep touch of the memory,  keep it bright for all the decades to come.

When future generations come here to sit in the shade of the Maple trees that shelter the memorial and grown tall and strong with passing years, they will find the names of patriots.  They will feel the connection that will come to pass on September 11, 2001, and how our country was forever changed.

And I hope they will think about all those of — all those heroes that were made in the hours and days and years that followed. Ordinary Americans responding in extraordinary and unexpected ways.

I hope we’ll remember that in the midst of these dark days, we dug deep, we cared for each other, and we came together.

You know, we regained the light by reaching out to one another and finding something all too rare — a true sense of national unity.

To me, that’s the greatest lesson of September 11. Not that we will never again face a setback, but that in a moment of great unity we also had to face down the worst impulses, fear, violence, recrimination directed against Muslim Americans, as well as Americans of Middle Eastern and South Asian heritage.

It’s that, for all our flaws and disagreements, in the push and pull of all that makes us human, there is a nation that cannot accomplish — there’s nothing this nation cannot accomplish when we stand together and defend with all our hearts that which makes us unique in the world: our democracy.

That’s a job for all of us. It’s not enough to gather and remember each September 11th those we lost more than two decades ago. Because on this day, it is not about the past, it’s about the future.

We have an obligation, a duty, a responsibility to defend, preserve, and protect our democracy, the very democracy that guarantees the rights and freedom that those terrorists on 9/11 sought to bury in the burning fire and smoke and ash. And that takes a commitment on the part of all of us — dedication, hard work — every day.

It’s not enough to stand up for democracy once a year or every now and then. It’s something we have to do every single day.

So this is a day not only to remember but a day of renewal and resolve for each and every American, in our devotion to this country, to the principles it embodies, to our democracy.

Thank you. May God bless you all. And may God honor the members of the military we lost and all those we lost here on 9/11. May God protect our troops.