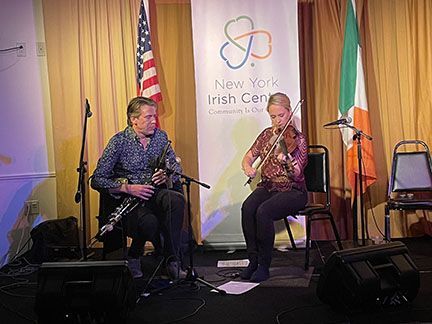 It was a triumphant return to form for Don Meade’s “Blarney Star” series last Friday in Long Island City, as droves came out to the New York Irish Center for an utterly brilliant night of traditional music.  I was impressed with the music, the turnout and the venue, and I headed home that night with a sense of optimism for what the future holds for live traditional music in the City.

Goff and Linnane performed particularly well.  The pair plays with lovely pacing, brilliant swing, and a gorgeous sound that fully realizes the tonal promise of the pipe-and-fiddle combo.  Their tune selection was varied, quite tasteful and a great example of how it should be done.  Soulful stuff, indeed.  Should you have a chance to check them out in the future (live, or – one can hope – on disc), I encourage you to do so, you won’t be disappointed.

Acosta, Ward (who is famous for having won the 2022 All-Ireland in the over 18 Accompaniment competition), and the Acosta School dancers (two of whom were Acosta’s daughters), were delightful as well.  Their music was quite nicely done and presented with a bit of conviviality, which seems to be something of an Acosta trademark.  Of everyone who performed in the opening set, however, I found I was most impressed with O’Kelly, who sang with wonderful style.   I was honestly caught a bit off guard.  Her poise and delivery were excellent and she sang with great confidence, but I might have been even more impressed with her extremely tasteful selection of traditional songs. It seems she really thinks about the old repertory in a way not many still do.  Impressive stuff, anyway, and certainly a highlight of the evening for me.  I look forward to hearing more from her down the road.

A few additional thoughts: I particularly liked that there was an opening act.  It gave the evening a bit of variety, but also a bit of life and conferred something of a throw-back feel on the evening.  It was nice to be able to see some younger, up and coming folks given an opportunity to shine.  The New York Irish Center proved to be an excellent, hospitable home for the series.  It is easy to find, in a hip neighborhood, and the sound and lighting were a step up from that of previous venues.  Furthermore, the availability of refreshment at the stage-side concession before the show and during intermission added to the evening’s hospitality and helped make the whole evening feel “homey.”  The New York Irish Center is a great place to see traditional music and I wish it all the success.  Hats off to Don Meade and to the New York Irish Center for bringing back the Blarney Star, there’s something special happening in this new space, and I’m ready for it.  Two enthusiastic thumbs up.

The next Blarney Star concert will feature the Murphy Beds (Eamon O'Leary and Jefferson Hamer) on Friday, November 18.  A monthly series, the Blarney Star is taking October off to avoid competing with the Mercy Center fundraiser traditional music concert that will happen at the NYIC on Saturday, October 22nd.  For more information about future Blarney Star events (and for the Mercy Center concert), visit www.newyorkirishcenter.org.

Finally: over the weekend, the great Billy McComiskey posted a clip to Facebook that I think readers of this column will appreciate: legendary flute player (and McComiskey’s fellow National Heritage Fellow) Jack Coen’s 1994 appearance on the PBS program “Great Performances.”  Introduced by Kris Kristofferson and shot around Woodlawn (with additional performance footage from the Rhinebeck Hotel), the segment includes interviews with Jack & Charlie Coen and Mick Moloney, and has appearances from Mike & Terry Rafferty, Willie & Siobhan Kelly, Tom Madden, Mike Preston, Jesse Winch, Jean Butler, and Donny Golden.  The chat is amazing, and the performance clips are very cool.  It’s a brilliant and basically forgotten clip that’s online (for the moment, at least) and completely worth checking out.