Home Labor was 'part of who we were' 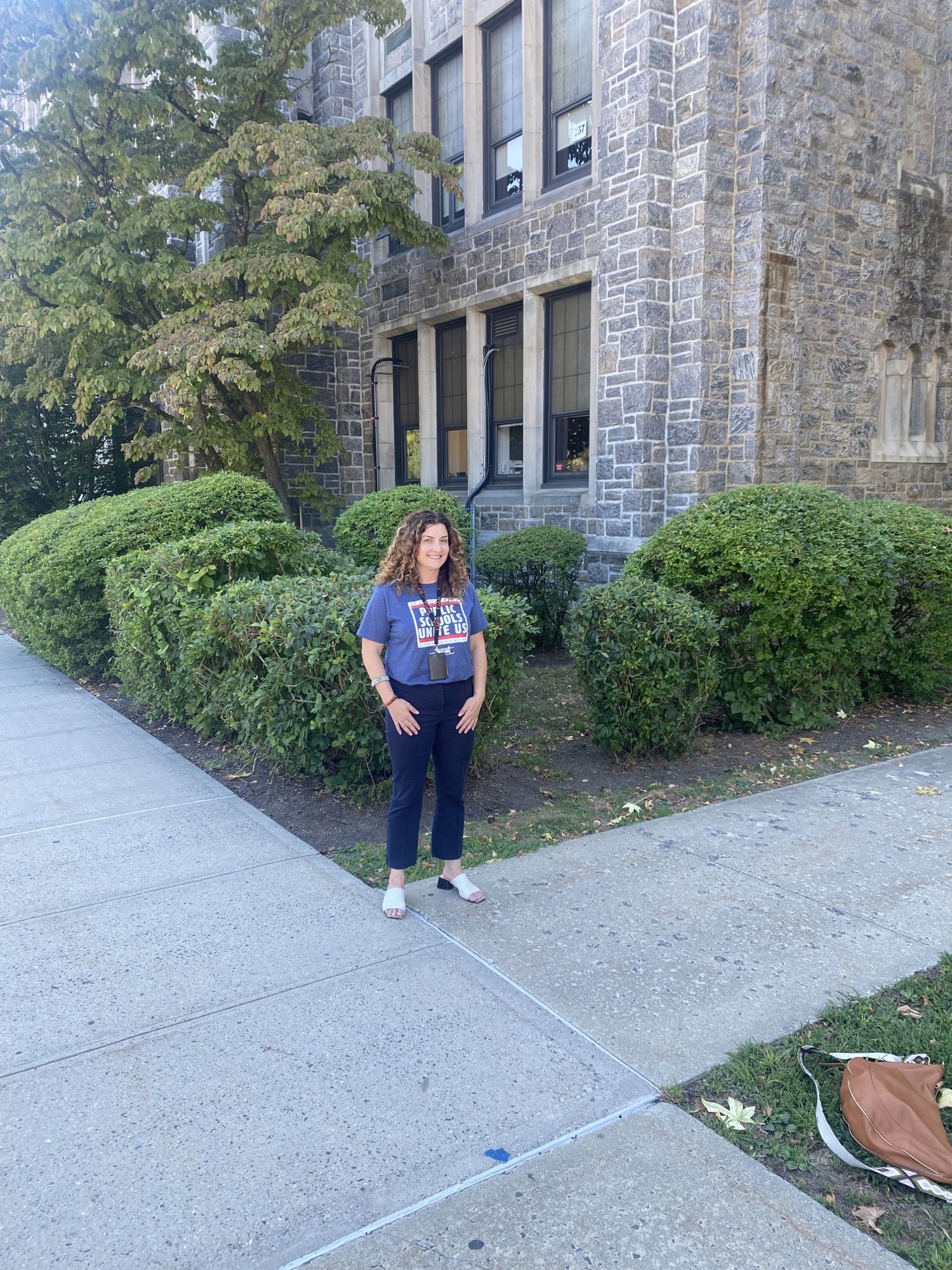 Labor was 'part of who we were'

So said Kara McCormick-Lyons, the president of the White Plains Teachers Association.

That’s why the 7th grade English teacher when checking in with members about working conditions, and to ensure they’re being taken care of, and when talking with management, must also have the students’ needs at the forefront of her mind.

McCormick-Lyons, who will be honored this evening at the Irish Echo Labor Awards, has an additional union role as a vice-president of the Union of Federation of Teachers. “So I spend a lot of time tuned in nationally, regarding education and labor and public policy," she said.

Of her full-time job, the Croton resident McCormick-Lyons said, “We teach the students to become critical thinkers; we don’t teach them what to think, but we sure teach them how to think. Literature is the pathway here that I’ve chosen to take.”

The students have a lot of choice in terms of what they can read and are allowed to gravitate towards what they’re curious about. “So we focus on skills,” she said.

“They are encouraged to investigate topics they’re interested in,” Kara McCormick-Lyons said of the students. “We all are scholars if we choose to be. We encourage them to think of themselves as scholars.”

As might be expected of an English teacher, her background was crucial in shaping her. “Growing up in my house, my dad, though he wasn’t college educated, was an avid reader and ensured that my brother and I were avid readers. He took such pride in the literary tradition of Ireland.

“He’d love to talk about Bram Stoker,” McCormick-Lyons recalled, citing an example, and added that “Dracula” was a favorite book of hers.

With this attention to literature and the written word generally (including the Irish Echo), she said, “it’s no coincidence that my brother is a political science professor and I’m an English teacher.”

McCormick-Lyons’s paternal grandfather, a longshoreman, worked to keep alive the Irish traditions because he’d been orphaned by the death of his parents in the Spanish Flu following World War I. (He resided in the institution that was at the center of the novel “Motherless Brooklyn.”)

The family kept his memory alive, and were aware of the deaths of the great-grandparents and some of their children in the worldwide pandemic of the early 20th century.

“I grew up down the block from my uncles who were veterans and then postal workers after the war. We were surrounded by the importance of labor, our culture and our religion as well.

“As an Irish American I’m also aware that struggle is part of our history,” she added. “As an Irish Catholic, I’ve grown up with the spirit of social justice and in doing what’s right. And I know that the work of labor is the pathway of justice and what is right.”

Ingrained was the view that organized labor “provided a stable path to the middle class for my family”; and connected to that is the belief that thanks to the labor movement “people can thrive and live well in this country”; and that “labor is part of the success story for Irish Americans.”

McCormick-Lyons said, “History teaches us what happens when there aren’t fair working conditions. And I’m just so thrilled about all of the unionization that’s happening right now.”

The causes of labor and of education intersect, in McCormick-Lyons’s view. “Everyone deserves a quality education, because that’s opportunity.”

How would the UFT Vice-President McCormick-Lyons make education better?  “All students deserve schools that are fully funded, safe and rich with literature and experiences and that also provide the pathway to the skills and the trades,” she said. “College isn’t the only pathway forward. If we could connect towards success, if we could train students who are interested in becoming electricians and getting unionized electrician jobs or becoming painters or carpenters, I think that would revolutionize our education system.”

However, teachers are under attack and education is constantly politicized. She said there is a PR campaign by people who want to end public education because an “educated populace is one that challenges those who are in power.”

The former president, Donald Trump, and the governor of Florida, Ron DeSantis, are among those leading the campaign.

“I’ve been called a ‘groomer’ on Twitter,” said McCormick-Lyons, who was raised in Woodhaven and Middle Village in Queens. “I don’t know what I’m grooming children for.

“Educators deserve to be respected for the important work that we do,” she said. “Our schools need to fully-funded centers of communities.”

For her, defending the cause of education and schools  couldn’t be more personal: her husband Michael is a public school teacher; while their children, Catherine Grace Lyons, 15, and Clare Elizabeth Lyons, 10, are public school students.

“Clare is named for the beautiful county,” said McCormick-Lyons who can boast roots in Roscommon, among other places in Ireland, and whose mother-in-law is from Knocknagoshel, Co. Kerry.

Not so long ago, her own mom asked, “Kara, are you going to go back to school?”

“No, but there’s one program that I really want to do. It’s called the Worker Institute at Cornell,” she replied. “You have to be invited in and the NY State AFL-CIO sends people and our state union sends people.”

“On the day of my mom’s funeral, I received a text inviting me to participate in the Worker Institute, which I thought was a beautiful sign,” she said.

On a recent trip to Montauk, McCormick-Lyons remembered that she’d brought her dad there and it was the last place he visited before he was too ill to vacation anymore. While thinking about that, she got an email telling her she would be honored at Thursday night’s Labor Awards.

“I felt again it was my parents’ approval of this work,” McCormick-Lyons said.