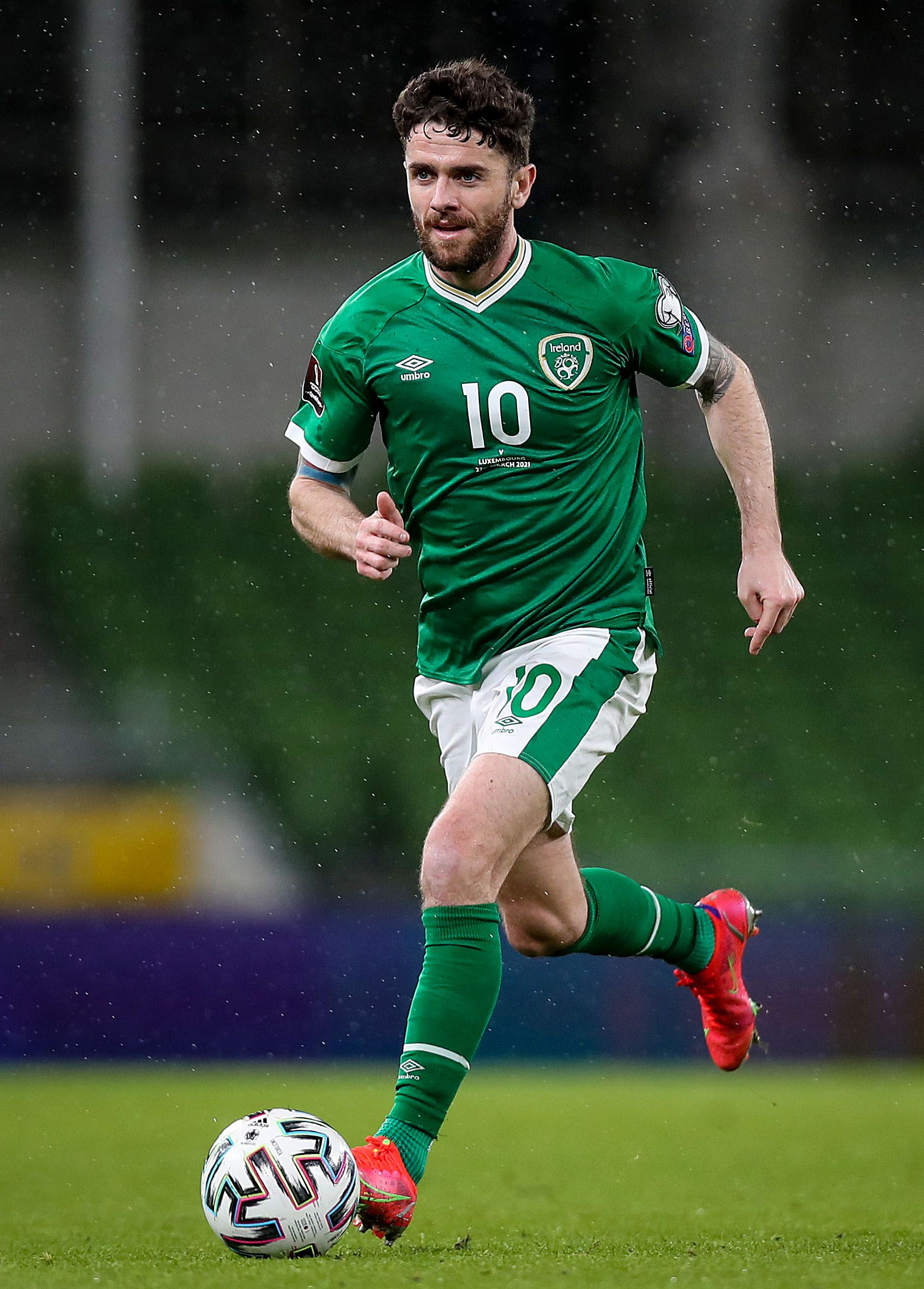 Robbie Brady in action for the Republic in March 2021. [Inpho/Tommy Dickson]

Republic of Ireland manager Stephen Kenny has recalled Robbie Brady to the Irish squad for the first time since March 2021 after his impressive form for Preston North End this season. Brady is included in the 24-man squad for the Nations League games against Scotland at Hampden Park on Sept. 24 and Armenia at the Aviva on Sept. 27. Norwich defender Andrew Omobamidele also comes back into the squad for the first time since recovering from injury; his last appearance in the green was against Luxembourg in Nov. 2021. Cardiff City winger Callum O’Dowda earns a recall following his impressive form since moving to the Bluebirds in the summer. In-form Birmingham City striker Scott Hogan, who got a hat-trick in the Blues 3-2 win over West Brom last week, is included as is Rotherham United’s Chiedozie Ogbene who has scored five goals in 10 games in all competitions this season. Liverpool goalkeeper Caoimhin Kelleher is injured and he is replaced by the uncapped Max O’Leary from Bristol City. Adam Idah and Enda Stevens are injured, while Cyrus Christie, Ryan Manning and Festy Ebosele are dropped having been in the squad for the June window.

That four-game  congested window  in June was a tale of two halves, as Kenny’s team began the group with defeats to Armenia and Ukraine before getting back on track though with an impressive 3-0 home win over Scotland, and then drawing 1-1 against Ukraine, when Nathan Collins scored that brilliant solo goal. Our scorers against Scotland at the Aviva were Alan Browne, Troy Parrott and Michael Obafemi. Our last visit to Hampden Park was in November 2014 for a European Championship qualifier. Martin O’Neill, who was Irish manager back then, dropped Robbie Keane and a Shaun Maloney goal gave the Scots all three points. In the return leg in Dublin in June 2015 Maloney scored again in a 1-1 draw and we eventually did qualify for the Euro 2016 finals in France after a play-off win over Bosnia Herzegovina.

Meanwhile former senior international Aaron Connolly, who is now on loan from Brighton to Venezia in Italy, and the promising Festy Ebosele, who also plays in Italy for Udinese, are in the Irish under 21 squad for the European Championship play-off against Israel. The pair have dropped out of Stephen Kenny’s senior squad, but under 21 manager Jim Crawford will have to do without the likes of Gavin Bazunu, Nathan Collins and Jason Knight, who will all be playing for the senior team next weekend, even though they are under 21. The first leg is in Tallaght Stadium on Friday Sept. 23, with the second leg in the Bloomfield Stadium, Tel Aviv on Sept 27.

It was a split that had everyone talking but, six years after parting ways, Michael O’Leary is set to renew his partnership with Willie Mullins as the Gigginstown House Stud will have horses under the champion jumps trainer’s care once again this winter. O’Leary and Mullins had enjoyed 17 Grade One victories together before a very public falling-out in September of 2016 over increased training fees at Closutton saw O’Leary remove a significant string of horses from the Carlow yard. However, a small number of horses in those famous maroon and white silks will run under Mullins’ banner again this season with racing manager Eddie O’Leary, brother of Michael, saying he is looking forward to linking up with Mullins once again. Eddie said: “All I will say is that it is a long road that doesn’t turn  We have had some great days with Willie and we are looking forward to having a couple with him this season again.’’  Michael O’Leary has  scaled down the number of horses he has in training since announcing that he would be winding down his racing operation.

Former Wexford footballer John Hegarty is the new Wexford senior football manager. Hegarty, who made 105 appearances during his Wexford senior playing career between 1995 and 2006 and won a Railway Cup medal with Leinster as well as six Wexford county titles for Kilanerin, is currently in charge of county champions Shelmaliers.

GAA president Larry McCarthy will unveil the new Bill “Squires” Gannon statue in Kildare Town on Sunday next. The Artane Band will play the National Anthem and all clubs in the county will have representatives, who have been asked to wear their club colors. Gannon was the first man to be presented with the Sam Maguire Cup after Kildare beat Cavan in the 1928 All-Ireland final. Sadly for Kildare supporters the county has not won the famous trophy since then.

The Squires Gannon statue will be officially unveiled by GAA president Larry McCarthy in Kildare Town on Sunday.

Willie Maher has been confirmed as the new Laois senior hurling manager, replacing Seamus “Cheddar” Plunkett. A serious eye injury curtailed his playing days, but the Ballingarry man has carved out an impressive coaching and managerial career. In 2012 he managed the Tipperary minors to an All-Ireland title.

The historic meeting of Munster and a South Africa Select XV at Páirc Uí Chaoimh in Cork is a sell-out. All tickets for the game were sold by Sept. 9. The game will be played at the home of Cork GAA on Nov. 10 at 7.30 p.m.

Sometimes the speculation is correct. When the rumors about former Leitrim and Dublin footballer supposedly taking over as Dublin manager from Dessie Farrell died down it was then suggested that Declan Darcy was about to join the Leinster Rugby backroom team. And last week Leinster coach Leo Cullen confirmed that Darcy was joining the club as Performance Coach. Cullen said; “We are always looking at different avenues and opportunities whether that be for players or for coaches or backroom staff and that is the case here with this new role. I have known Declan for a few years now and have followed his coaching journey closely. He has a wealth of experience working with some hugely successful teams.”

Waterford’s Dan Shanahan has confirmed his retirement from hurling at the age of 45.Twenty-nine years after his senior debut for his club Lismore, the 2007 hurler of the year announced his decision in the wake of Lismore’s recent senior county quarter-final defeat to Mount Sion. Dan the Man’ said: “I hung up the boots after the Mount Sion game, “I was disappointed with the way it ended for me but that’s sport. I have given 30 years to my club and I have no regrets.” Shanahan won one senior county title with Lismore and county and Munster intermediate honors in 2017.’’

Kerry’s 2022 captain Joe O’Connor is facing a lengthy layoff after suffering an ACL injury last Friday night. He was injured playing for his club Austin Stacks in Kerry senior championship game against  Na Gaeil. O’Connor suffered a lesser injury to the same knee during Stacks’ Munster club SFC final loss to St. Finbarr’s back in January. Having been nominated by his club to captain Kerry for 2022, he was then forced out of most of their successful National League Division 1 campaign, starting just one game and making two further appearances off the bench. O’Connor featured in four of Kerry’s five matches in the championship, all as a sub, as the Kingdom won their first All-Ireland since 2014.