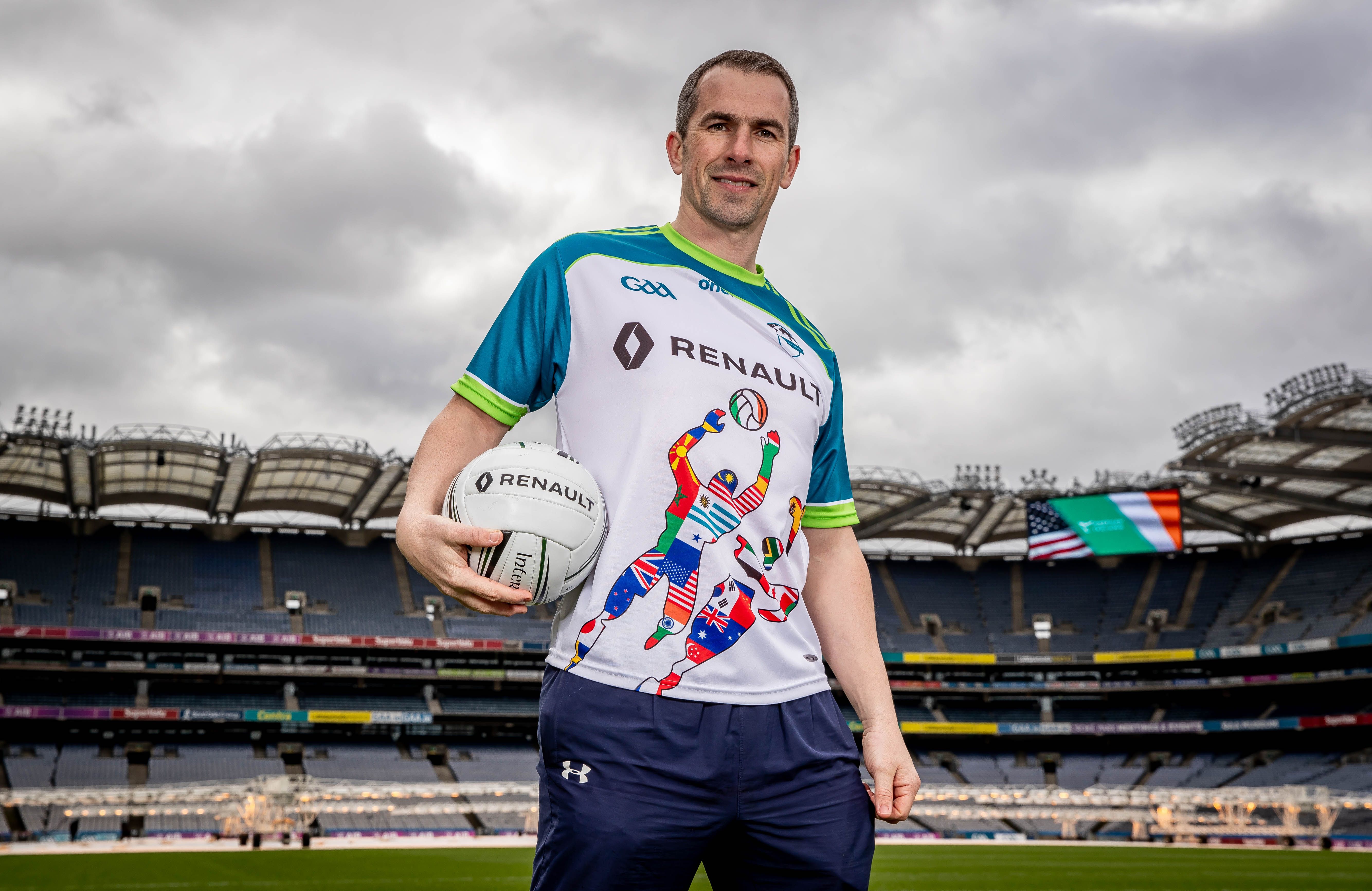 The new Westmeath manager Dessie Dolan in a photo taken in Croke Park in 2019. Inpho/Morgan Treacy

The GAA have outlined in broad strokes the 2023 master fixtures calendar with finishing touches to be completed in coming weeks. The powerful Central Competitions Control Committee has been deliberating over the schedule, and has extended the inter county season by a week, with the All Ireland football final taking place on July 30 next.

There had been some discussion about ending the National Football league finals, as suggested recently made by Connacht secretary John Prenty, but they’ve been retained.

A meeting of Ard Chomhairle took place in Croke Park last week and it indicated that it also favored the following: The return to collective training for senior inter-county teams: Nov. 24; Congress 2023 take place on 18 Feb. 8; That the U20 Development Leagues be retained; That the Joe McDonagh Cup Final be played with the All-Ireland U20 Hurling Final as a double-header; Permission be granted to the Rules Advisory Committee to continue its work of re-formatting the Official Guide (Part 1).

Former Kerry star Pat Spillane has re-iterated his opposition to the split season. He said: “We have taken our two best products, inter-county hurling and football, and taken them off the shop window for nine months. Now, when you take your best product out of the shop window for nine months, you give the opposition a chance. Maybe we are not going to go as far as the third Sunday in September to play an All-Ireland final, but at least take back the month of August.’’ And former Dublin star Bernard Brogan made a good point when saying: ‘‘You ask someone now when the All-Ireland final is on, and they won’t be able to tell you. It has lost that fixture in people’s mind that used to make it special.’’

Some of international cycling’s biggest stars are expected in Ireland this winter, with part of the prestigious UCI Cyclo-Cross World Cup due to be held in Dublin. Round nine of the 2022 UCI Cyclo-Cross World Cup will bring the world of mud, sweat and gears to the Sport Ireland campus in Abbotstown on the weekend of Dec. 11 and will attract some of the biggest names in the sport as they prepare for the world cyclo-cross championships in Belgium a month later. Tour de France green jersey winner Wout Van Aert of the Jumbo Visma team is a triple world cyclo-cross champion and a regular at World Cup events in the winter. The Belgian could be on the start list in Dublin and would be a huge attraction for Irish fans as would his Dutch rival and four-time world champion Matthieu Van Der Poel from Alpecin-Deceuninck. British rider Tom Pidcock of Ineos Grenadiers is the latest in a bunch of riders with an off-road background to make their mark on the World Tour and the current world champion will surely make the short trip across the water to ride the event. Pidcock won two rounds of the competition in the Netherlands last year, while Van Aert took victory in the Belgian round in Namur as well as Val di Sole in Italy, while the 15-race series was won by Eli Iserbyt of Belgium.

Westmeath football legend Dessie Dolan was last week appointed manager of the county’s senior footballers. It’s the Garrycastle man’s first management job and he replaces Jack Cooney, who has gotten a full-time job with the GAA. Cooney stepped down last month after four years in the job that yielded a National League Division 3 title and the inaugural Tailteann Cup.

Undisputed lightweight champion Katie Taylor will return to the ring next month when she takes on undefeated Argentinian Karen Elizabeth Carabajal at Wembley Arena on Oct. 29. The  bout will be the Bray boxer’s first fight since her record-breaking win over Amanda Serrano at Madison Square Garden in April. There were talks around a rematch, with Croke Park mentioned as a potential homecoming venue, but these came to nothing and Taylor will now take on Carabajal (19-0, 2 KOs). The 32-year-old from Buenos Aires will be fighting outside Argentina for the first time as she and Taylor headline a card at the London venue. Taylor (21-0, 6 KOs) has held the IBF, WBO, WBA and WBC lightweight belts since defeating Delfine Persoon in June 2019. Next month’s fight will be her seventh defence of the belts.

Clare GAA’s new head of operations is Deirdre Murphy. From the Clooney-Quin club, she is due to take up the new role from Oct. 24. Clare are to follow up Murphy’s appointment with others including a commercial and brand manager, a finance manager and a facilities manager. In July, Pat Fitzgerald stepped down from his position as County Secretary after 32 years, 15 of them on a full-time basis.

Former Republic of Ireland international John Sheridan has announced his retirement as a manager. Sheridan, who will be 58 on Oct. 1, left National League club Oldham Athletic last week and has confirmed he will not be managing again. Sheridan took charge of his 415th match for the Latics as b0th player and manager as they beat Eastleigh 3-2 to move them up to 14th place in the National League. The victory ended Sheridan’s sixth spell at Oldham. He came out of retirement in January, following his departure from Swindon Town the previous April, in a bid to help save his beloved Oldham from dropping out of the Football League, which he not was unable to do.

Sheridan said: ‘‘I won't manage another team. I don’t think I will get the opportunity anyway. I love football. It has looked after me. I just feel that my age and for me to try to be happier it is time to concentrate on other things. Being honest I don't think I have done that well the last couple of years, whereas I had a really good record.’’ Sheridan was born in Stretford near Manchester and qualified for Ireland through the parentage rule. He won 34 caps between 1988 and 1995. Apart from Oldham, he managed several other clubs in the lower divisions and had a stint with Waterford in recent times.

As there are no international games in the traditional October window due to a revised schedule around the Qatar World Cup the FAI has confirmed two friendlies for November. Stephen Kenny team will play Norway in Dublin on Nov. 17 and then they are away to Malta on Sunday, Nov. 20. That’s the day the World Cup kicks-off at 4 p.m. Irish time in Qatar.  It’s expected that Norway, with Manchester City’s new star Erling Haaland in their team, will be a big attraction. Norway also boast Arsenal captain Martin Odegaard, Brentford’s Kristoffer Ajer and Southampton's Mohamed Elyounoussi in their ranks.

Ireland will take on England next year in a Test match at Lord’s. The four-day match will be played from June 1-4  at the north London venue, while Ireland will return to England for three white-ball games in September. Ireland’ last Test match at Lord’s was in 2019, where Tim Murtagh memorably took five wickets on the first morning to skittle England out for 85. The hosts went on to fight their way back into the ascendancy thanks to 92 from the bat of Jack Leach as Ireland fell to defeat. Ireland will also play a Test away to Bangladesh in March 2023.

Former Waterford hurler Dan Shanahan has given his biggest hint yet that he is set to be involved with the Laois hurlers next season by giving new manager Willie Maher a ringing endorsement. The Waterford legend was part of Maher’s backroom team when he managed Kilkenny club Bennettsbridge and there is speculation that he will also be following him to the O’Moore County. In a recent radio interview Shanahan said: ‘‘Willie is honest, he is hard working. I have no doubt in my mind this man is going to go places. He is a real leader.’’