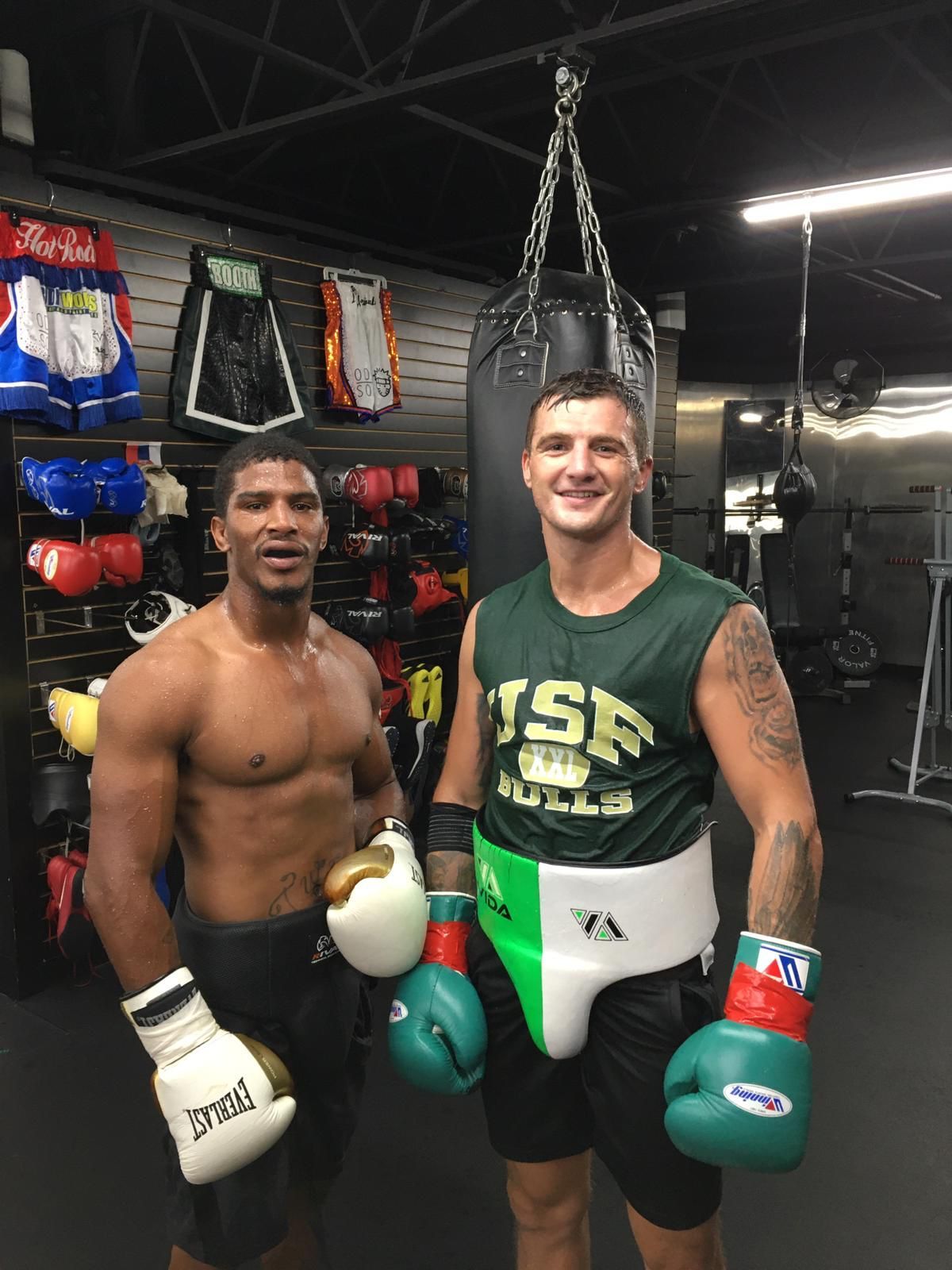 Connor “The Kid” Coyle (right) after a sparring session ahead of his fight in Tampa this weekend.

Coyle, McCrory have bouts this weekend

“Fearless” Feargal McCrory’s delayed U.S. debut is finally on this Friday. The undefeated super featherweight out of Tyrone faces Texan Cesar Afredo Cantu in a scheduled six-rounder at the Brooklyn Masonic Temple, located at 317 Clermont Ave. in Fort Greene, Brooklyn. The match will end McCrory’s more than three-year layoff.

The next day in Tampa, Florida, world ranked Derryman Connor “The Kid” Coyle returns to action in a scheduled eight-rounder with Silverio Ortiz.

“I’m feeling great and I’m ready to put in a performance for the amazing Irish people who have supported me during my time here,” said the 11-0 [5 KOs] McCrory, ahead of his scrap. “I can’t wait to hear you all in Brooklyn this Friday.”

In Cantu, who’s 28 and born in Weslaco, Texas, the Irish southpaw faces a 3-4-1 [win, loss, draw] opponent two years his junior.  Nicknamed “El Matrix,” Cantu is a late replacement for Alejandro Torres Rynn, the 7-3 [4 KOs] Mexican-born Canadian citizen who was his earlier scheduled foe at the Amazura Concert Hall in Jamaica, Queens.

McCrory last fought on May 18, 2019 when he scored a first round TKO of Elvis Guillen at Belfast’s Europa Hotel. He moved States-side early this year after John Duddy, the former world middleweight contender turned actor, agreed to train him.

McCrory was a four-division Irish national amateur champion with titles in the bantamweight, super bantamweight, featherweight and light welterweight divisions. He represented Ireland internationally, fighting in tournaments in Ukraine, Germany and Greece among other nations.

He made his pro debut in Nov. 2015, stopping Hungarian Zsolt Schmidt in the first round at Belfast’s Waterfront Hall. Nine of McCrory’s next 10 fights would be in Belfast and one in Tallaght.

Fight number 12 was supposed to be on the undercard of Michael Conlan’s then annual St. Patrick’s Day appearance at New York’s Madison Square Garden. McCrory had spent 11 weeks training in Brooklyn under Andre Rozier. It was scuttled by the Covid-19 lockdown.

In the Sunshine State, 10th ranked World Boxing Association [WBA] middleweight Connor Coyle puts his pristine 16-0 [7 KOs] record on the line against Mexican Silverio Ortiz, who’ll enter the ring at the Alessi Fitness Center with a 37-31 [18 KOs] ledger. At 32 and a solid six-footer, Coyle is seven years younger than Ortiz and six-inches taller.

Coyle is coming off his biggest victory to date, a split decision over Antonio Todd for the NABA 160-pound title last May. That victory earned him a top 15 ranking in the world in June. He’s climbed to #10 in the World Boxing Association and is on track to fight for a world title in 2023.

In celebration of the An Garda Siochana centenary, New York’s Bravest squares off with Ireland’s Finest in a 10-bout card on Friday, Sept. 23, at the National Stadium in Dublin.

The FDNY team flies out next Wednesday, led by club president Bobby Maguire, who has Roscommon roots. Following are details on some of the boxing firefighters:

Super featherweight -- Matt Blewitt, a firefighter from Engine 48 in the Bronx. This will be his first trip with the team;

Light heavyweight -- Kevin Guzman, an EMT, works at Station 17 in the Bronx. This will be his FDNY boxing debut;

Light heavyweight -- Sean Dillon, from Engine 283, he is a boxing instructor on Staten Island; and

Light heavyweight -- Javier Rosario, an EMT at station 43 on Coney Island. This is his third bout with the team.