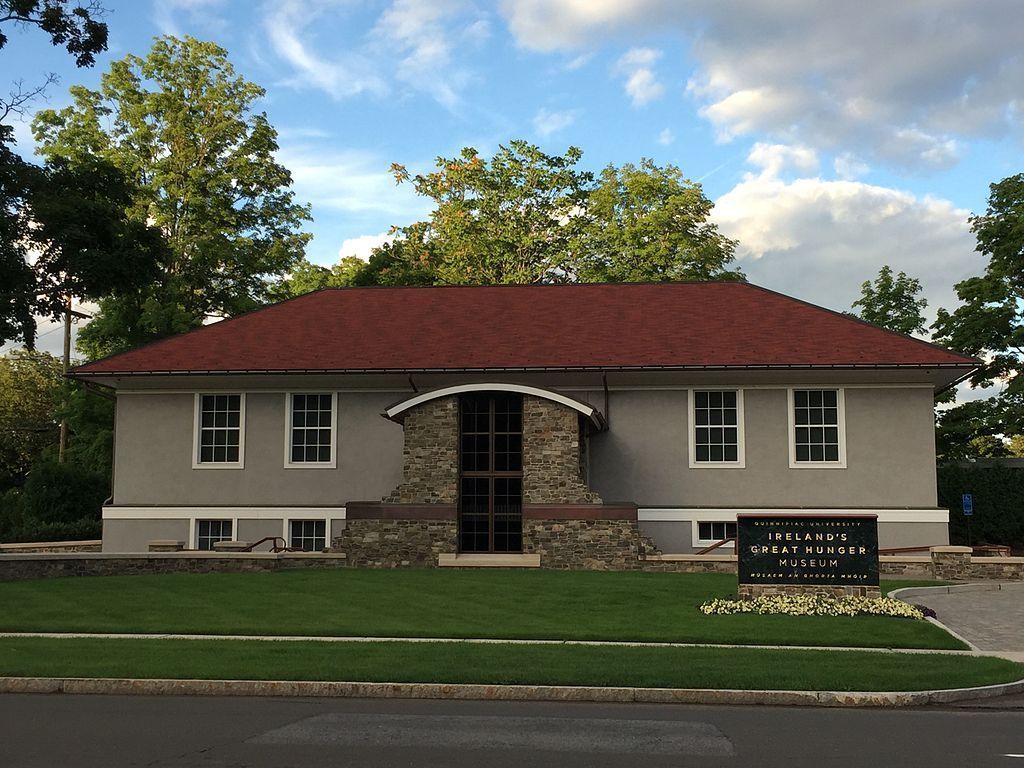 A few weeks ago it seemed as if the future of Ireland's Great Hunger Museum in Connecticut might have been settled, at least relatively so.

But no, it is far from settled.

Indeed, there is now an on-the-table challenge to the future of the Quinnipiac University-based museum as being the responsibility of the Gaelic American Club of Fairfield.

And the challenge has come from Ireland's Great Hunger Bord, a group comprised of individuals who see the future of the museum in a very different light.

The group (it uses the Irish language word for board - "bord") is chaired by Turlough McConnell, who prominently led public protests at Quinnipiac when the university moved to close down the museum.

In a statement, the Bord pointed to what it described as a "threat" to Ireland’s Great Hunger Museum as it "enters a new and dangerous" phase.

The statement said in part: "Ireland’s Great Hunger Museum at Quinnipiac University should be celebrating its tenth anniversary this month. The Museum that proudly opened its doors on September 28, 2012, was the culmination of years of curating and culling art, artifacts and texts that bore witness to An Gorta Mór, Ireland’s Great Hunger.

"Instead, Quinnipiac has decided to play a dangerous game. The public outcry surrounding the unjustified closure of the Museum has fallen on deaf ears, and QU has, in an act of flagrant disrespect for their public trust, loaned a portion of the Collection to Ireland’s Great Hunger Museum of Fairfield, a hastily formed entity with no building, staff, membership or financial capacity.

"Selected artworks will be on display in a hallway at the Fairfield Museum and History Center for a few weeks before being hustled back into storage with the remaining collection indefinitely. That Quinnipiac has approved of the loan of 30 pieces - of which only 24 appear to be on view - is an outrage and a violation, given that Quinnipiac is still the guardian of the artworks.

"Moreover, the loan was made on false pretenses: last March, in response to the furor over the museum’s shuttering, Quinnipiac issued a public statement falsely asserting the Collection was to be entrusted to the care of the Gaelic American Club in Fairfield, Connecticut.

"Then, last week (09.21.22), in a written memo to its members, Gerry Forde, the Executive Committee-President of the Gaelic American Club disclaimed any responsibility for the collection or for establishing a new Famine museum.

"Allowing unauthorized private citizens to handle the art is a final insult and tipping point. Intent on preserving the collection and honoring the legacy of the Famine, Ireland’s Great Hunger Bord calls for an expanded review of these actions in the Office of Connecticut’s Attorney General in the due process that the situation demands, the public deserves, and the University owes the heritage community.

The statement described the Great Hunger Museum as the world’s only museum dedicated to paying tribute to the devastated victims of the catastrophe and its ramifications for global migration.

"The Collection, accessioned by donation from the artists and their estates, was housed in an off-campus building on Whitney Avenue architecturally redesigned for this purpose. The Museum quickly became an international symbol of compassion and human rights.

"Its future as a commemorative site and a center of learning was bright. Yet that was not to be. Rather than build on the Museum’s worldwide acclaim following the Collection’s successful, year-long tour of three sites in Ireland including Dublin Castle, in 2020 Quinnipiac’s new president, Judy Olian, announced that IGHM would close immediately and permanently following a vote by the University’s board of trustees and despite its recent acceptance of public donations to keep the museum open.

"President Olian’s claim of the Museum’s insolvency was disputed, and groups of supporters came forward to offer funding to continue its operation. These efforts were rebuffed, and during the Covid pandemic, the collection was locked and uncared for, with no information disclosed regarding the management and storage of the artworks.

"The closure of the IGHM ignited public indignation challenging Quinnipiac’s authority to close an institution subject to special fiduciary duties including the obligation to maintain the collection’s integrity, provide access to the public and specialists, and ensure its physical well-being.

"These are the responsibilities of any museum dedicated to the public benefit. The notion that Quinnipiac would revoke its support from IGHM, an entity 'dedicated to educating people about the evils of discrimination and bigotry — in this case anti-Catholic and anti-Irish bigotry — at a time when the world is so concerned with these issues doesn’t make a whole lot of sense,' former Quinnipiac president John Lahey told The New York Times.

"The decision was not only puzzling; it was haphazard and in violation of the museum’s mission to hold these cultural artifacts in trust for the public benefit. Let us be clear: temporary loans of part of a collection violate the fiduciary responsibility to protect, preserve, and display a collection as the donors intended.

"Many familiar with the case suggest that Quinnipiac simply reopen the shuttered IGHM with the money the University is spending on storage, insurance, lawyers and temporary exhibitions such as the display of artwork in the Fairfield History Center. Yet attempts by supporters of the Museum over the last year to work with Quinnipiac in fundraising and to provide professional support have been flatly rejected by the University.

"Though Quinnipiac states that the Museum is financially unsustainable, it refuses to provide evidence to support that claim. Members of Ireland’s Great Hunger Bord have pressed Connecticut Attorney General William Tong to investigate the closure of the Museum.

"The interim report of the Attorney General, issued on August 16th, concluded - as the Trustees should have known - that no transfer of the Collection could occur without first obtaining judicial approval through a deviation action in Court.

"Specifically, Quinnipiac remains the custodial owner of the cultural art and thus has fiduciary obligations not only to protect and preserve the Collection, but to display it in a qualified Museum setting. These responsibilities cannot be voted away by Trustees, nor the collections transferred, without public scrutiny and due process before the Connecticut Superior Court known as a deviation action.

"In a deviation action proceeding, the University will have to prove that it is incapable of meeting its obligations; they must prove that they are honoring the interests of those who donated to the museum; and that the institution they hope to take on those cultural assets is better prepared than they are to be stewards of the collection.

"We, Ireland’s Great Hunger Bord, cannot stand by while the Trustees continue to shirk their fiduciary duties. We urge Attorney General William Tong to fully discharge the duties of his Office to 'represent the public interest in the protection of any gifts, legacies or devises intended for public or charitable purposes,' and determine why the Trustees of Quinnipiac University claim it cannot operate the Museum as the donors intended.

"Furthermore, we call on the Trustees to honor their individual fiduciary duties to: 1. Publicly retract and correct the persistent false statements that the Collection is being transferred to the Gaelic American Club, which has now disavowed these statements to its own members. 2. Use the funds being diverted to abandon operation of Ireland’s Great Hunger Museum to immediately re-open the Museum and properly preserve and display the Collection as the living artists and donors intended; or if not: 3. Commence the required deviation action immediately to prove that it can no longer operate the Museum as intended and seek approval from the court to transfer the Collection to a qualified operational Museum now and not years in the future.

"Absent such actions, the Trustees must respond to and explain why they refuse to protect the original vision of the Museum honoring Ireland’s history and educating the public."