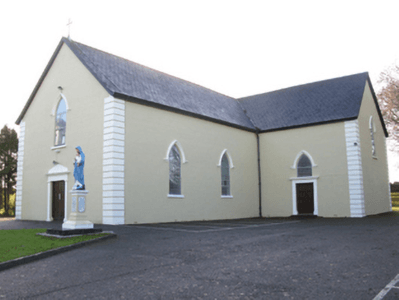 Reports are doing the rounds in East Mayo of a Eucharistic Miracle that has taken place in St. Joseph’s Church in Aghamore.

Many believe that the strange happenings at a recent Sunday Mass is nothing short of a miracle, while others remain less convinced.

It is claimed that the miracle occurred after a Eucharistic Minister accidentally dropped a consecrated host to the floor of the village church. After being placed in a bowl by the priest, the host took on the appearance of bloody flesh tissue.

But strange events like this are nothing new in this corner of County Mayo. Back in August of 1879 the villagers in nearby Knock claimed to have seen an apparition of the Virgin Mary.

They did so at about 8 o'clock on Thursday evening the 21st of August, 1879, a time when famine and oppression were felt throughout Ireland.

There were fifteen official witnesses to the Apparition including men, women and children of various ages. They watched the apparition for about two hours in the pouring rain and recited the Rosary.  The site has since become an international shrine to devout Catholics.

Another very strange occurrence took place a short distance in Mayo’s very own Bermuda Triangle. Situated in the parish of Aghamore, Tooreen is a small village, approximately five miles from Ballyhaunis and 10 minutes’ drive from Ireland West Airport Knock. T

he ballroom in Tooreen, under the management of a dynamic young curate, became one of the country’s best-known venues for a very unusual reason. It was reported that the Devil himself attended a dance in the dancehall back in 1954. The story earned huge publicity for Tooreen dance hall which continued to flourish well into the 1960s.

The establishment of ‘Knock Airport’  was the brain child the same cleric who masterminded Tooreen dance hall. At a time of widespread economic stagnation and mass emigration from the West of Ireland the then Knock parish priest, Monsignor James Horan, decided to build an international airport on a foggy, boggy hilltop in Mayo’s Bermuda Triangle.

In 1983 Christy Moore famously composed a song inspired the airport called “The Knock Song,” containing the legendary lyrics, “I’ve never seen a miracle like the airport up in Knock.”

The notorious Mayo Curse is brought up every time Mayo makes it to an All-Ireland final.

The curse dates back to 1951 – the last time the county’s footballers won the Sam Maguire. Apparently the victorious team was being driven back to Mayo through the East Mayo town of Foxford.

They came upon a funeral taking place in the town and unfortunately for themselves, and for generations of Mayo’s long-suffering supporters, they neglected to pay proper respect. The story goes that an enraged local priest placed a curse on the team to the effect that while any member of the 1951 team lived, Mayo would never win another All-Ireland.

During the Great Hunger and genocide of the 1840s, nobody suffered more than the poor people of Mayo.

The phrase long associated with Mayo people and all things Mayo; “Mayo, God Help Us!” came into being  as the response to Mayo expatriates throughout the world whenever they were asked which Irish county they called home.

Perhaps we need to look no further than the crest on our county football jerseys to try and decipher this phrase which has come to define us. Críost Linn can mean  “Christ, stand with us."

Mayo’s Croagh Patrick is Ireland’s Holy Mountain and also features on the county crest. This is where St. Patrick spent forty days and nights praying and fasting on top of the mountain in an effort to convert Ireland to Christianity.

Maybe the recent events at Aghamore church are a sign that the curse has been lifted and we are about to reach the promised land and find the holy grail, our 71 years of wandering in the footballing wilderness over.