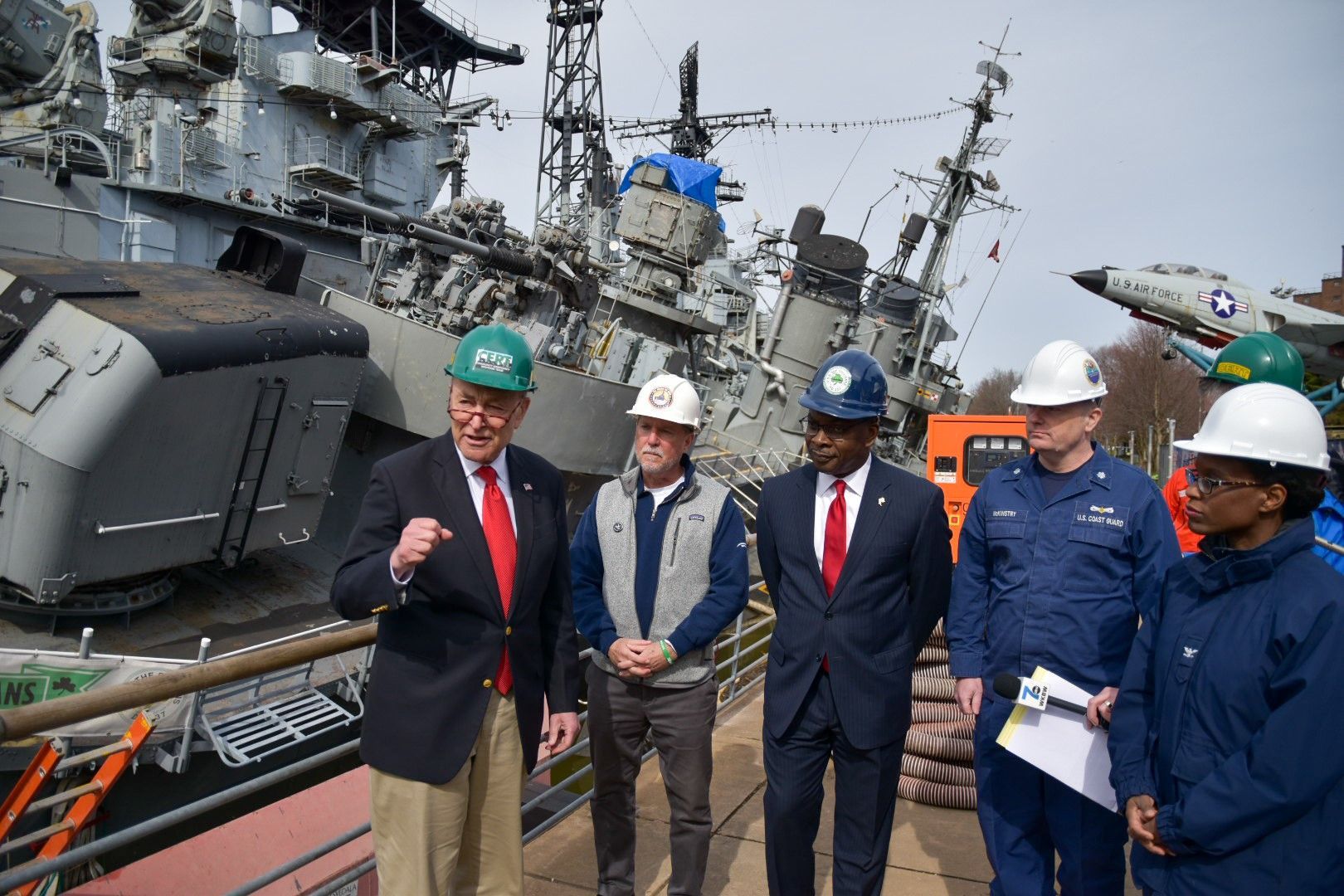 Senator Charles Schumer (left) beside the listing USS The Sullivans

It's all hands on deck and full steam ahead for the securing and repair of USS The Sullivans which began sinking at its berth in Buffalo, New York earlier this year.

Senator Charles Schumer has secured $7.5 million that will be used to plug the leaks and right the famed ship.

Said a statement from Schumer's office: "After promising to help restore the USS The Sullivans after the ship tragically began sinking earlier this year, U.S. Senate Majority Leader Charles E. Schumer today revealed he has secured $7.5 million in the just announced Senate appropriations bill to fund repairs of the iconic WWII Western New York landmark. The money will flow into Western New York after the appropriations bills pass in Congress later this year."

Said the Senate Majority Leader: “In April I put out an SOS to the feds - Save Our Sullivans - and promised it would be all hands on deck until we got the funding needed to restore this pride and joy of Buffalo.

"Now I am proud to announce that hope is on the horizon to fully restore the USS The Sullivans and ensure she remains at Canalside as a beacon on Buffalo’s beautiful waterfront. This funding is the lifeboat this historic vessel needs to complete its repairs, and I will keep fighting to guide us through these rocky waters and steer this ship through the repair and restoration process to keep her safe and seaworthy for generations to come."

Others weighed in behind Schumer's sentiments.

“This investment will mean the restoration of the USS The Sullivans and secure its place in Buffalo’s Naval and Military Park for generations to come,” said Buffalo Mayor Byron W. Brown.

“I was proud to stand with Senator Schumer almost immediately after the ship began to sink and once again he has delivered for an iconic Buffalo institution.”

“When Senator Schumer visited the naval park after the ship’s hull was breached, I knew we were in good hands,” said Paul Marzello, Director of the Buffalo Naval and Military Park.

“The USS The Sullivans is stable, and in good hands, but the long-term restoration work has not yet begun. With this funding we will be able to make sure all the needed repairs and improvements can be done and the USS The Sullivans will remain a centerpiece of our facility for all coming time as a fitting tribute to the brave men and women who have served their country. This is exactly what we needed and Senator Schumer delivered just like he said he would.”

Added the statement from Schumer's office: "Immediately after the USS The Sullivans began sinking, Schumer came to Buffalo and stood outside the sinking ship to pledge his support to the veteran and Western New York community to help get the federal funding to repair the landmark. The funding will go directly to ensuring this beloved vessel can be restored and remain on permanent display at the Buffalo Naval and Military Park. Specifically, $2.5 million of the funding will come from the National Park Service’s Historic Preservation Fund and $5 million from the U.S. Department of Housing and Urban Development’s Community Development Fund as congressionally directed spending once Congress passes its annual appropriations bills.

"Schumer said the City of Buffalo and the Naval Park are currently receiving proposals from naval architectural firms with expertise assisting unique museum institutions, like the USS The Sullivans, to assess the condition and structural integrity of the hull of the ship to determine the best path forward for repairs, and this funding will go directly to completing these efforts.  The ship, Schumer added, is currently stable and no longer presents an environmental hazard to the Buffalo waterfront. However, the repairs made to her hull and interior were only meant to stabilize the ship and do not represent an adequate or permanent repair.

"In addition, to pushing for funding through the appropriations process, Senator Schumer is also exploring ways to ensure the USS The Sullivans, Buffalo’s historic lighthouse, and other historic maritime facilities across the country have the funding they need for years to come by bolstering the National Maritime Heritage Grant Program available through the National Park Service. This funding could also be utilized for the other vessels at the Naval and Military Park.

"Commissioned in 1943, the USS The Sullivans operated in the Pacific Theater during World War II and is one of four remaining Fletcher-class destroyers left in the world. The ship is named in honor of the working-class Irish-American family that lost all five of its sons during the Naval Battle of Guadalcanal in 1942. It was decommissioned in 1965 and donated in 1977 to the City of Buffalo, where it remains a National Historic Landmark and has served as a memorial and museum ship ever since."