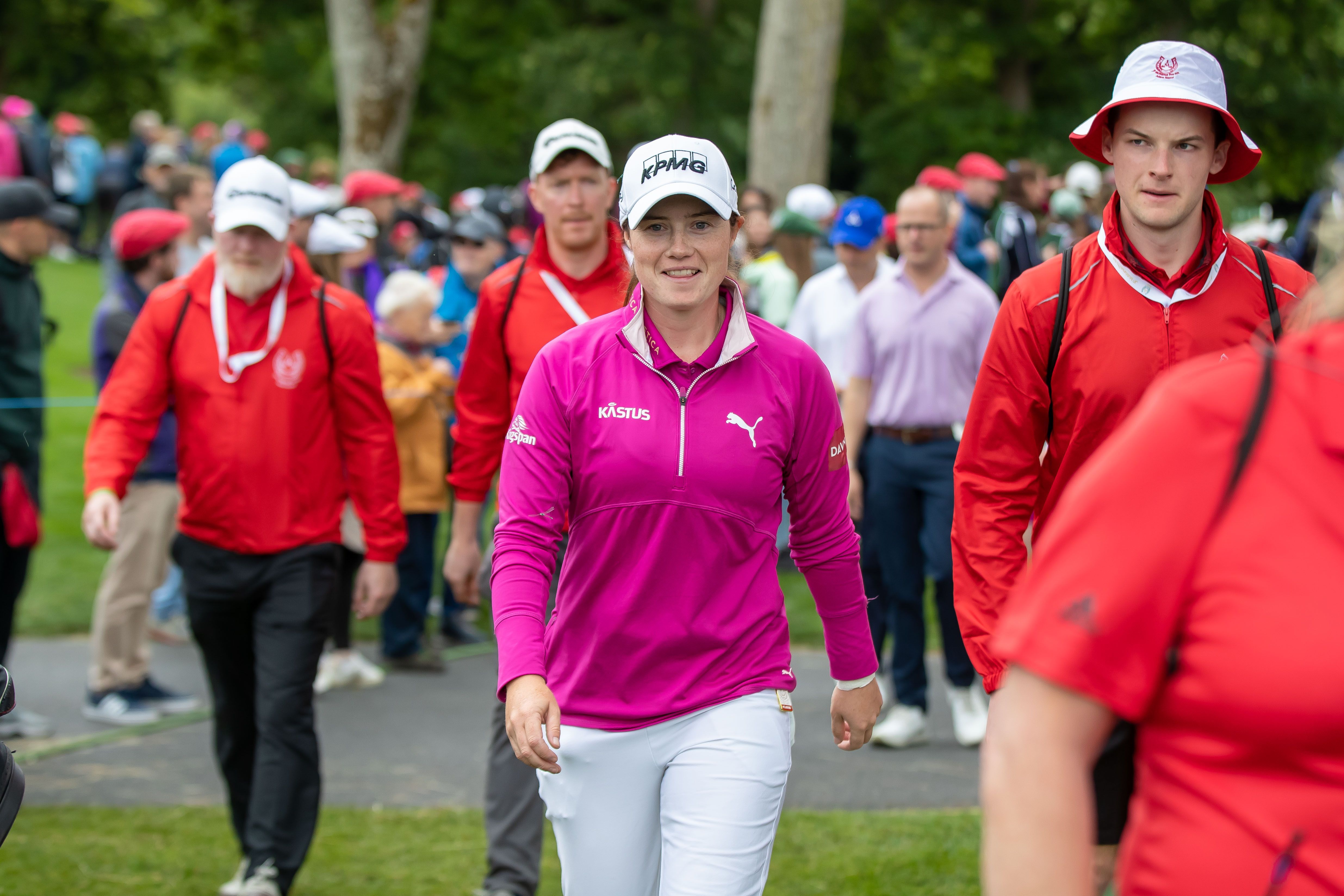 Leona Maguire got her second top-10 in a major for 2022. INPHO/MORGAN TREACY

Top-5 finishes were the order of the day on Sunday and even a tie for 20th place was reason for jubilation.

Leona Maguire tied for fourth place in the British Women’s Open at Muirfield in Scotland. Although she finished just three strokes off the low duo of Ashleigh Buhai and In Gee Chun (Buhai won the playoff), Maguire played most of the tournament on the fringe of contention.

Maguire was six strokes back after rounds of 71 and 69, and then fell 12 behind after Saturday’s 71. Her immaculate 66 on Sunday was low round of the day and enabled her to close the gap on Buhai, the overnight leader, who finished with 75.

Maguire finished the event seven strokes under par, thanks largely to the par-5 fifth hole, where she carded two eagles and two birdies over the four days.

“Always nice to finish strong in the last round of a major, bogey-free,” Maguire said. “Felt like I kept it out of the fairway bunkers this week and didn’t hit it in a single fairway bunker. Drove it as well as I’ve probably drove it in a while. If I had had my week on the greens, things could have been a lot different.”

This was Maguire’s second top-10 in a major in 2022; she earlier tied for eighth place in the U.S. Women’s Open.

Stephanie Meadow missed the cut by three strokes. Her opening round of 76 saw not a birdie on her card. Friday was better as she shot 72 but a two-hole sequence where she went bogey-double bogey at 13 and 14 sealed her fate.

Next up for Maguire and Meadow is this week’s ISPS Handa World Invitational at Galgorm Castle in Ballymena.

To say that a golfer lost a tournament is not always fair; often, there is a combination of mistakes by one and clutch play by another that tilts the result in the favor of the latter. However, it can fairly be said that Padraig Harrington snatched defeat out of the jaws of victory in the Shaw Charity Classic at Canyon Meadows in Calgary, Alberta.

Harrington established an early lead when he sank an eagle putt from the fringe at 18 in Friday’s first round for a pristine 64. He staggered to a 2-over-par 72 on Saturday, having suffered bogey at five of his first 10 holes, to drop three strokes off the pace. Despite that, he clawed his way back to the top on Sunday.

Three consecutive birdies beginning at the ninth hole suggested that Harrington was on his way to victory. Then, inexplicably, he botched short par putts at the 12th and 13th holes, walking away from each with bogey.

Yet, Harrington was still in with a chance at the par-5 18th. Again, he had a putt of less than five feet that, had he made it, would have qualified him for the playoff with Jerry Kelly and John Huston. The putt was spot-on, only to be rejected by the cup, as if there was some odd karma in the air.

So, Harrington slunk away, tied for third place, a stroke off the low number.

Darren Clarke rejoins the cast, including Harrington, for this week’s Boeing Classic in Snoqualmie, Wash.

John Murphy earned a share of third place in the Finnish Challenge in Vierumaki, Finland. Unlike Harrington, he never worked his way to the top of the leaderboard, nor did he kick away easy opportunities to salt the victory.

Murphy shot 67, 69 and 62 to begin the fourth and final round one stroke off the two co-leaders, with whom he went out. Saturday’s 62 was three strokes better than any other score that day. He began the round with eagle but gave those strokes back with bogey at the second and fifth holes. He then went on a run of eight birdies over the next 12 holes, capped off by eagle at 18. He’d also claimed two eagles in the opening round.

The die was cast on Sunday, however, when rival (and eventual winner) Velten Meyer reprised Murphy’s trick of the day before and took eagle at the opening hole. Meyer never looked back in a bogey-free round as he shot 65 to Murphy’s 70. Marc Hammer, the other co-leader at the start of the round, also shot 70 to claim second place.

The result boosts Murphy into 28th place on the Road to Mallorca rankings. Top 20 at season’s end earn DP World cards for 2023. Tom McKibbin, who didn’t play in Finland, stands 16th, while Ruaidhri McGee, who also didn’t tee off, is 30th.

Dunne notched his best performance of 2022 in Wales, where he reported having made only three of 15 cuts to that point, his best finish being a slice of 36th place back in February. His M.O. this year has been a fine first round, followed by a horrid second round. But not at the Celtic Manor.

Dunne never really made a run at the leaders but held his position admirably over the weekend. Five of his nine birdies came over just two holes, both par-5s, and he limited his bogeys to just eight, along with a double, to finish the tournament a stroke over par.

Niall Kearney’s going to need a big push from here on out if he’s to improve his status for 2023. He’s 163rd on the Order of Merit, one peg lower after finishing joint-59th in Wales. He cleared the cut line by two strokes after shooting 72 and 73. But he got no traction over the weekend, posting scores of 76 and 73. Just like Dunne, two holes, the par-4 15 and the par-5 11th, saved him. He took seven strokes off par there over the four days. Elsewhere, just three birdies against a passel of bogeys and worse.

Shane Lowry had to hire a private jet to return him from Florida to North Carolina for Saturday's third-round action in the Wyndham Championship. He looked to have missed the cut after he shot 71 and 68 on Thursday and Friday, respectively, but late movement saw the cut line move below where Lowry stood. So, he flew back to Greensboro on Saturday morning. Was it worth it? Only if he was looking to get in extra work for this week’s St. Jude Championship, the opening installment of the FedEx Cup playoffs.

Lowry posted weekend rounds of 74 and 71 to join Jason Dufner at the bottom of the leaderboard, tied for 83rd place, four strokes over par.