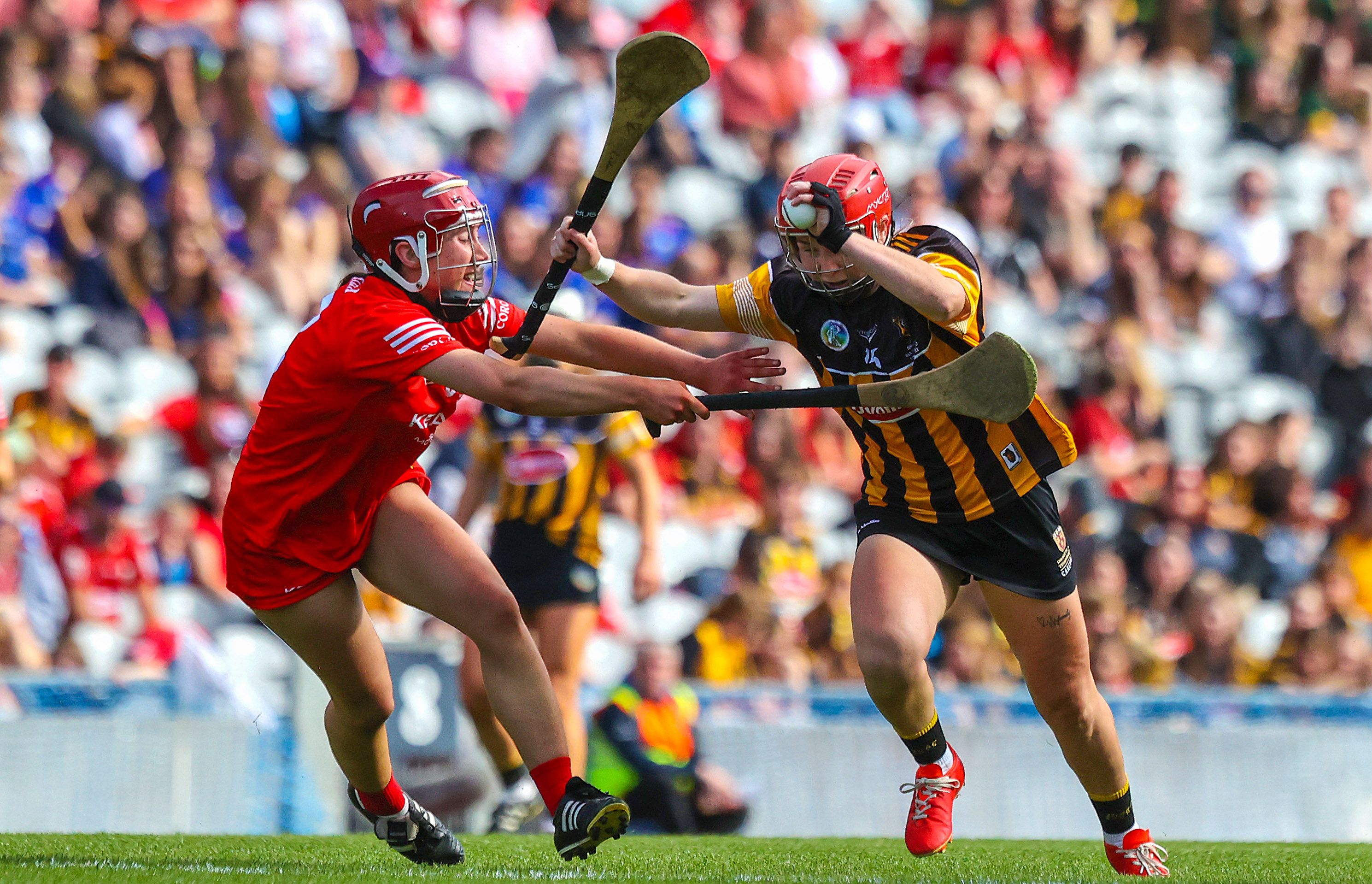 Cork's Meabh Murphy and Katie Nolan of Kilkenny in action during the All Ireland camogie final. INPHO/BRYAN KEANE

Kilkenny had to win this game twice before finally getting the better of Cork in an exciting  All-Ireland senior camogie championship final at Croke Park on Sunday.

These teams always set up great fare and this was the third occasion in six season that there was only a point between them at this final stage.

That winning point on this occasion came in the 62nd minute when Denise Gaule held her nerve to send over the winning free. Cork had looked the likelier coming down the home strait but then a 57th-minute goal from Kilkenny sub Sophie Dwyer changed the complexion of the game in front of 23,426 fans.

Earlier when Brian Dowling’s side hit six unanswered points before Cork got going, it looked like a one-way final but in fairness, Cork showed great character by rallying to not only level but get ahead with five minutes to go.

Even when Kilkenny scored the late goal to go ahead, the Rebelettes showed their mettle by levelling again from Katrina Mackey but Gaule’s free signalled delight for the Cats and despair for the southern girls.

Okay, time to get real after a great GAA season on the intercounty hurling and football fronts.

Hurling is by virtue of the fact that only half a dozen counties are real contenders at any time an elitist sport – nonetheless a great spectacle and one that has got better over the years thanks to Cork initially, then Kilkenny and latterly Limerick bringing the game to constantly higher levels.

In football Dublin has left us a legacy which in time will be seen as greater than what the Kerry-Dubs era of the 1970s bequeathed to the GAA. Kerry came back this year and with Galway, Dublin, Derry and maybe Tyrone four of a possible 10 or 11 counties (Mayo, Meath with Colm O’Rourke on board, Donegal if Jim McGuinness comes back, Armagh and a surprise from a Roscommon or Kildare or Monaghan), the game appears in rugged good health.

However this is now the third week since the All Ireland final, it is still only early August and we have no GAA left to spur us on for the rest of the year. What about the county championships I hear you ask?

Yes, this is where the problem is. I’ve been to three senior club games since  Jack O’Connor and his merry men headed to the Kingdom with Sam Maguire and with respect, the fare is barely watchable.

So bad in fact that I asked friends in three other counties to go to matches last weekend and report back to me in terms of excitement. Between my own view and that of three others here is what this research has yielded:

1.   Virtually every game was described as “boring” – play just went over and back with fewer and fewer goal incidents.

2.   Players are obviously fitter to play this game but their technique and ball skills are poor as the only ability needed to get on a team nowadays is to be able to hand pass (the lowest skill of a footballer) and run and run and run.

3.   All of us agreed that paying €10 or €15 for a single game or double header respectively is not worth it.

Indeed, the word “shocking” kept cropping up in our chats with everyone saying they will go to fewer games “until the GAA do something about the hand-passing overkill.”

As our President Larry McCarthy is an avid Echo reader, I am writing this in the hope that he does something about this cancer before it does major damage to the GAA playing body.

Maybe I’m showing my age but traditionally what made going to GAA games special was to see the players’ head-to-head at midfield or between a full-back and a full-forward. Virtually all of that is gone now because that other cancer, the short kick out, has nullified those high-fielding contests. Tell me, would you agree that see a goalkeeper kick a ball 15 metres to a corner back is as exciting as watching butter melt on a fine day on a saucer?

The President will be remembered for taking arguably the most important step in the GAA by giving the club player a platform on which to play by dividing the season between intercounty and local fare.

Most of the GAA activity takes place at club level so giving us months like August and September to watch and play games is more vital than whatever marketing value that may be lost in a condensed season.

But what good is an empty stage if we don’t have something attractive to offer on it?

I am going to put forward just three changes that will alter the game of football for the better if Congress could show some bottle and not be overridden by the power of the intercounty managers – as happened the last time one or other of these suggestions were put forward.

Firstly, by introducing a rule which makes it compulsory for the ball to travel past the 45 metres line from kickouts, we bring back the possibility of those high aerial duels again with the skill of high fetching being rewarded. You could also add a mark for a successful catch, thus making it worth managers’ while to ensure they have an aerial specialist in their ranks.

Secondly the hand-pass has to be looked at again. When attempts were made to introduce a limit of three or four passes, managers went out of their way to get on to their players to try to confuse the referees by shouting incorrect numbers at them. This meant that refs said it was unmanageable on top of all the other things they had to do in a game.

I’ve some sympathy for them on that score but how much harder is it than the steps rule?  My own preference would be for three successive hand-passes only, which make the counting so much easier and clearer to manager. If that was a rule, then the onus would be on the managers to get their players to kick a ball again – after all the name of the game is football, not hand ball!

These two rules introduce the level of contest back into the game which was the attraction that traditionally drew the people to watch these games at both local and national level.

My third point would be to forbid any sort of  hand back passing unless carried out inside either 45. That would prevent such things as teams running down the clock by going back to their own goalkeepers or defenders – again a huge negative to the spectating public.

I’m aware that any or all of these might not happen in Larry’s time now as he is half-way through his term but he needs to get people thinking about the game of Gaelic football which has lost its main on-field attraction at club level and in many games at intercounty level as well. The likes of Dublin and Kerry are so good they can make games good but they are the exception to the rule.

Next week, I’ll look at hurling and my main worry about it which has to do with player welfare as much as the standard of fare such games serve up.

PS – While I’m at it, I’d like to give Larry the kudos for introducing the Tailtean Cup in his watch. This gave teams from overseas like New York and the so-called weaker counties at home a real chance to train on into the summer with a chance of tangible success.

The GAA community worldwide was in shocking at the weekend on hearing of the collapse and death of Tipp hurler Dillon Quirke while he was playing for his club Clonoulty/Rossmore in a championship game at Semple Stadium.

It was late in the first half that Dillon fell to the ground in Friday evening’s game against Kilruane MacDonaghs. Despite receiving immediate medical attention on the pitch, the 24-year-old  failed to recover and was pronounced dead at Tipperary University Hospital, where he was taken by ambulance.

Dillon was making his way as an intercounty player, having made his senior debut against Limerick two years ago following successful campaigns in winning  All-Ireland Minor and Under-21 medals.

Although Tipperary failed to advance during the transition season just ended, he started all four games in the Munster championship and was a player that new manager Liam Cahill was looking to as he seeks to rebuilt a new team for the 2023 season.

That won’t happen now and  the sadness at his passing was tangible both in the county and at club games around the country this past number of days.

A statement from the county board stated: “Tipperary GAA extends its heartfelt and sincere sympathies to Dan, Hazel, Shannon, Kellie and the extended Quirke family. Also, to the Clonoulty Rossmore GAA Club and his teammates on the sad and tragic passing of Clonoulty Rossmore and Tipperary hurler Dillon Quirke.

“Tipperary GAA wish to thank all those who attended to Dillon in Semple Stadium and in Tipperary University Hospital this evening.

“As a mark of respect to Dillon, Tipperary GAA have called off all games due to take place in the County Hurling Championships this weekend.”

Among those offering their sympathy was President Michael D Higgins and Taoiseach Micheál Martin.

GAA president Larry McCarthy in offering his sympathies said: “There is a huge sense of shock across the GAA Community at the tragic loss of Dillon who had already achieved so much in his young life.. He was a young man in his prime with so much potential and promise and on behalf of the GAA family I would like to extend my sympathies to Dillon's parents, Dan and Hazel, and his sisters, Shannon and Kellie, at what is an unimaginably difficult time.”