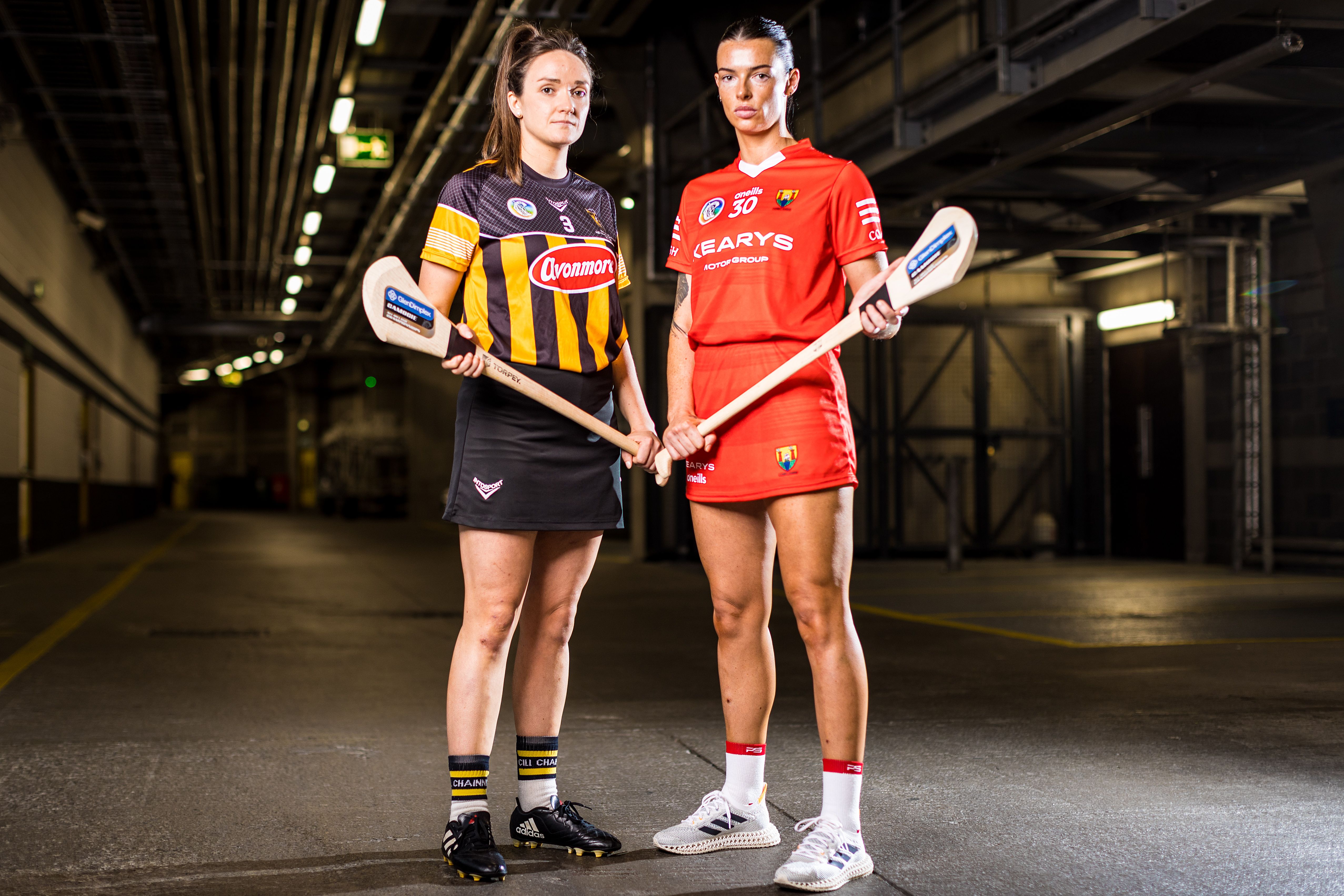 Kilkenny’s Claire Phelan and Ashling Thompson of Cork at a promotional event for Sunday’s All Ireland camogie final at Croke Park. INPHO/LASZLO GECZO

Clare’s Davy Fitzgerald is rarely out of the news with his name being linked to various club and inter-county jobs. On Sunday next the Clare native will be back in Croke Park as coach to the Cork Camogie team, who play Kilkenny in the All-Ireland senior final. After leaving Wexford last year Fitzgerald decided to take a break from the men’s game and took on the Cork role where he has worked with manager  Twomey to bring the Rebeletes to another final.

Cork started very slowly in their semi-final against Waterford, but then after 20 minutes they brought on the experienced Ashling Thompson, who a few hours earlier had her one-match ban for verbal abuse of a referee lifted. Thompson is a brilliant player and used all her experience to help her Cork colleagues to come back from being five points down at half-time to eventually win the game by five points.

In the other semi-final Laura Murphy got the all-important goal that saw Kilkenny beat reigning champions Galway. The last final between the counties was in 2018 when Cork won by one point. Cork have won the senior final 28 times, while Kilkenny have won the O’Duffy Cup 14 times. The Cup is named after Mayo native Seán O’Duffy who was a tireless promoter for the game of Camogie and did his best to heal wounds caused by various disagreements in the association in the 1940s and ‘50s.

The semi-finals double header at Croke Park drew a very poor attendance of just over 3,000, but they were played on a Saturday. However, with three finals on Sunday the attendances should be much higher. Cork has also qualified for the Intermediate final where they will play Galway, while Antrim and Armagh will contest the Junior decider.

So who is going to replace Brian Cody as Kilkenny senior hurling manager? The short list appears to be: Henry Shefflin, Derek Lyng, Eddie Brennan and Michael Fennelly. Shefflin might not want to walk away from Galway after just one year, but as Liam Cahill said when taking the Tipperary job at the second offering, you can never be sure when the chance will come up again. Lyng was a selector under Cody for five years from 2014 before switching to manager of the county under 20 team. Eddie Brennan also managed the Cats under 20 team before moving to Laois for two years to manage their senior team. Fennelly recently quit as Offaly manager last week after three years in charge.

Colm O’Rourke is the surprise choice as the new Meath senior football manager. A few weeks back the former Meath full forward said he had no interest in the job, having been turned down several times in the past. He now replaces Gerry McEntee in the Royal hotseat and will have Stephen Bray and Barry Callaghan as his selectors.

The new boss is the first person to have managed his country in the Compromise Rules against Australia, before managing his own county. He says his targets are a win over Dublin and a return to Division One of the National Football League.

O’Rourke will have to leave his role as match analyst with RTE’s Sunday Game, but will probably continue to write  his sports column in the Sunday Independent.

Attendances at Irish racecourses for the first six months of 2022 were down 9 per cent on 2019 levels. While the number of horses in training and field sizes have increased since 2019, the last full year before the Covid-19 pandemic, the falling numbers of racegoers has to be regarded as a concern for the industry. However, Suzanne Eade CEO of Horse Racing Ireland is confident the trend can be reversed. She said: “After a challenging couple of years, the hard work and efforts across the industry has meant that Irish racing is in a strong position to face up to the combined challenges of the lingering effects of the Covid-19 pandemic, Brexit, and an increase in the general cost of living.’’

A scene from  the Galway Race Festival Day 4 last Thursday, but crowds are down generally on pre-pandemic figures. INPHO/TOM MAHER

James McCartan has stepped down as manager of the Down senior footballers. McCartan’s second term in charge of his native county lasted only one season as Down failed to win a game in 2022. They were relegated from Division 2 in the National Football League, before losing their Ulster championship opener to Monaghan. They followed that up with a first round Tailteann Cup loss to Cavan. An iconic figure who won two All-Ireland medals as a player and subsequently managed Down to reach the 2010 All-Ireland final during his first spell as manager, McCartan called time after an ill-starred campaign blighted by poor results and then player defections ahead of the Tailteann Cup campaign.

Cork senior football manager Keith Ricken has stepped down from the role on health grounds. John Cleary will be proposed for ratification as his replacement on a three-year term at Cork’s County Committee meeting this week. Ricken replaced Ronan McCarthy as Cork manager in October 2021, but temporarily stood down in April this year on health grounds. Cleary took over as interim manager and led the county to the All-Ireland quarter-final where they lost to Dublin.

The death occurred recently of racing driver Paddy Hopkirk, who famously won the 1964 Monte Carlo Rally in a Mini Cooper S. He was 89. Hopkirk was born in Belfast and educated by the Jesuits at Clongowes Wood College in Kildare before studying at Trinity College. Reminiscing about the win in Monte Carlo, Hopkirk, who was awarded an MBE in 2016, said: “Everybody wanted to win the Monte Carlo Rally, it was a very glamorous event, so when I joined the British Motor Corporation and the Mini came along it surprised the world. It became a David and Goliath with the might of the other car manufacturers spending a fortune to try and win the event.’’

Hopkirk, who won the Circuit of Ireland five times, remained a key figure in motor sport all through his life and became president of the influential British Racing Drivers’ Club, who own Silverstone.

Also the death has occurred of former Louth footballer Kevin Behan. The Ardee native died on Sunday July 24, the day of the All-Ireland football final, 65 years after he had helped Louth beat Cork to win the Sam Maguire Cup. Back in 1957 Kevin set-up the goal for Sean Cunningham that helped the Wee County win the final for the third time. Behan was renowned as an excellent place kicker and commentator Micheál O Muircheartaigh once described him as the most perfect kicker of a ball he had ever seen. Behan won five Louth senior football titles with St Mary’s of Ardee and four senior hurling championships with St Colmcilles and also won two Railway Cup football finals with Leinster.