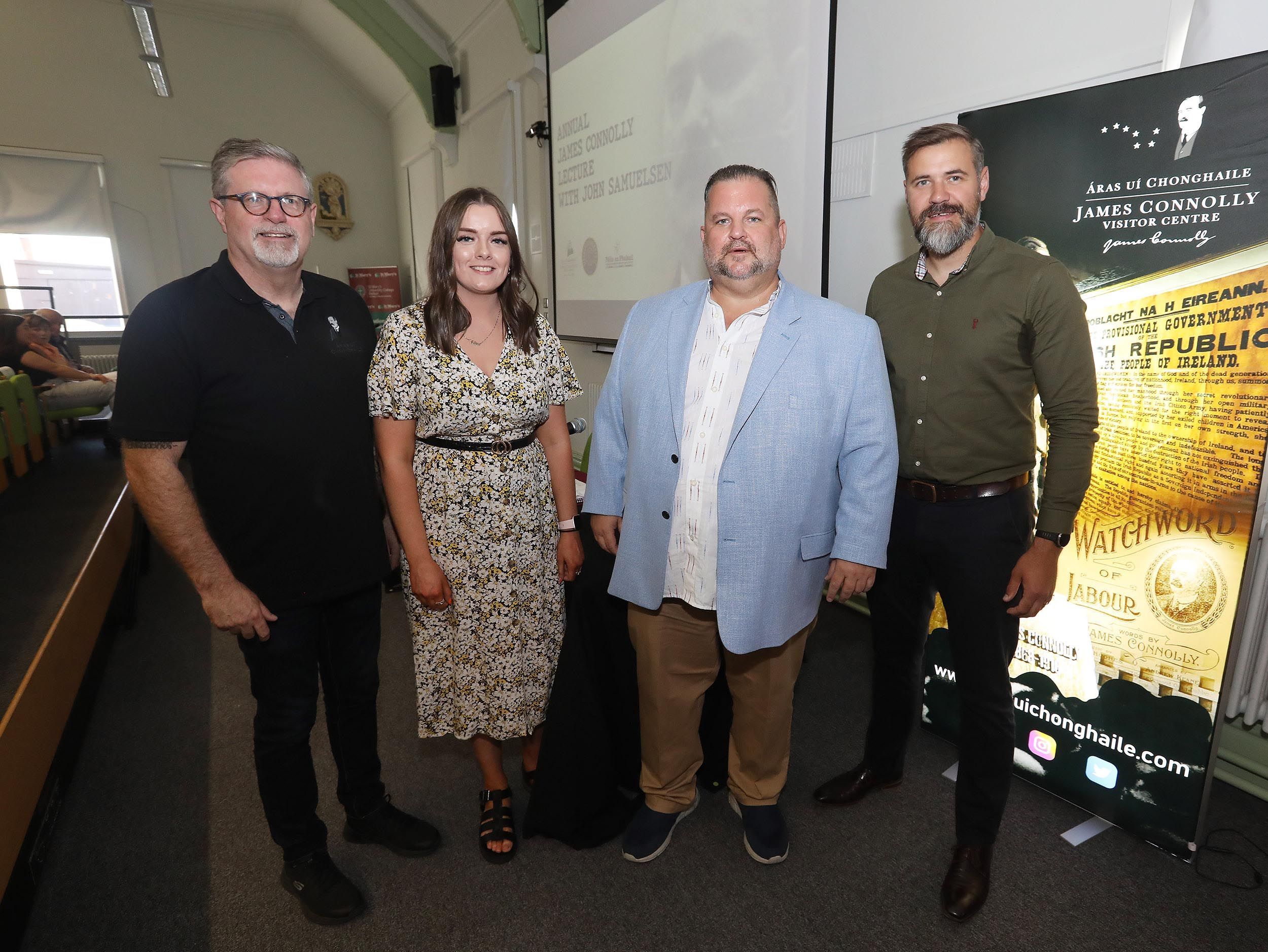 James Connolly’s legacy is hard to quantify, given how large his presence remains in both Irish politics and in the trade union movement. Connolly was a towering influence on his era whose writings promoted anti-imperialism, Irish freedom, feminism, trade unionism, worker solidarity and anti-capitalism.

In June 2016, a delegation from West Belfast visited John Samuelsen in New York, having met him a few months before at the unveiling of the James Connolly statue which now sits outside the Connolly visitor centre. John pledged the first $100,000 to the opening and transformation of the James Connolly Visitor Centre from a derelict and rundown building, into the modern, impressive interpretative centre it is today. Áras Uí Chonghaile houses information on the life and times of James Connolly (who lived on Glenalina Terrace off the Falls Road, near the centre and numerous works of progressive workers literature.

Speaking before John Samuelsen, Jim McVeigh, former Sinn Féin Councillor and one of the co-founders of the James Connolly Visitor Centre, drew attention to how the writings of Connolly were so relatable to ongoing struggles in the world today. He said the need for workers to organise to fight back against bosses was an ongoing battle.

“P&O sacked over 800 workers and they were able to do this because of Brexit and the Tories determination to deregulate and undermine workers conditions and pay," he said. "Up on the Springfield Road in Caterpillar, workers are on strike and the owners of the company have been bussing in scabs from across the water and putting them up in five-star hotels. This isn’t happening in 1913, it’s happening in our city today. Now more than ever capitalism is transnational and global and if we have any hope of fighting these huge global companies, it’s going to be through international solidarity between workers and unions. This is about fighting the same fight that Connolly fought for back in the day."

Taking to the podium, guest of honour John Samuelsen said that as President of the TWU, he represents over 155,000 workers in the US. His union was built on the basis of Connolly’s teachings and the work which he undertook when he lived in America from 1903-1910.

The TWU’s philosophy of being an anti-racist, anti-sectarian, broad union representing all workers involved in transport was brought to fruition by Michael Quill, an Irishman from Kerry and former IRA veteran of the Irish War of Independence and Irish Civil War. “He devoured the teachings of Connolly, in particular his teachings about representing all workers regardless of their job, race, gender, or creed," said Samuelsen. "Mike Quill adamantly kept to Connolly’s teachings that craft unions were unworkable, as they allow bosses to pit groups of workers against one another, and only by having one big union, encompassing jet engineers to porters and cleaners, could workers truly stand united against any attempts by bosses to reduce pay or conditions.”

It was our pleasure to welcome John Samuelsen, International President, and a delegation from @transportworker to Belfast City Hall this morning!

Continuing to foster transatlantic partnerships, following in the footsteps of Connolly 🙌🏼 pic.twitter.com/Ml86mGlZE0

Samuelsen, who earned his spurs as a trackworker for the New York Subway said the TWU remains a fighting union. "TWU aggressively fights on behalf of workers to ensure they get the best deals in terms of wages, and conditions," he said.

The origins of TWU came from Irish immigrants to New York who were often given the most dangerous and low paying work in the worst conditions in the New York subways. Bolstered by veterans of the Irish War of Independence and Civil War, many Irish Clan na Gael members used their experience of fighting the British and intelligence gathering (Mike Quill was himself a message runner for the Kerry IRA) to organise workers and achieve better pay and conditions. John Samuelsen said the Union was first named the Irish Transport and General Workers Union, after the Union founded by Jim Larkin and James Connolly in Ireland twenty years previous.

The TWU chief said the current crisis in inflation and the cost of living crisis has led to a renewed interest in trade union membership and resulted in the TWU becoming the fastest growing union in America.

Samuelsen is also President of the James Connolly Irish American Labor Coalition which was co-founded by Rock Streets native relocated to Troy, NY, Jim Devine of the Communication Workers Union. Coalition members were responsible for ensuring the 1981 hunger strikes were publicised in America and are now at the forefront for campaigning for a United Ireland.

Samuelsen said he felt great pride in having Mike Quill as his predecessor as TWU chief.  “Mike Quill was only 11 when James Connolly was executed but he was deeply influenced by Connolly’s belief in and sacrifice for a free and independent Ireland. Even to the day he died, he was planning on coming home for the 50th anniversary of the Easter Rising, but he passed away before [1966].”

Such was the Irish influence, through figures such as Mike Quill and numerous other veterans of the War of Independence, that the IRT workers (Interborough Rapid Transport Company) were nicknamed ‘Irish Republican Transit’.

John Samuelsen stressed his union's anti-racist roots. As Quill said in 1935:  “Our aim, is at all times, to protect, safeguard and improve the working conditions and living standards of all transport workers regardless of race, colour, creed, nationality or political views of affiliations.”

“This was in 1935," added Samuelsen. "There weren’t too many trade union leaders in New York or anywhere else in America talking about race or inclusivity in contracts and fight backs against bosses. Quill practiced what he preached, especially when it came to the issue of race. In 1935 he reached out to the IRT’s black workers, who were the lowest paid, and could only serve as porters, and denied promotions.

"He helped them form an all-black committee for IRT workers. Such was the effect of Quill, that the workers voted 1452 to 69 in favour of joining the Union.”

Samuelsen also turned his attention to the polarised political situation in the US with barbs for both big parties. "Arguments between the two parties only ever had one result, and that result is to the detriment of working people," he said.  He blasted the Democrat party for ignoring working people, for signing NAFTA, and through their neo-liberal economic policies, ensuring millions of workers switched their allegiance to the Republican Party and Donald Trump. "Both parties have been failures in improving the lives of working people," he said.

‘When I feel I need to recentre myself, I will always turn to Quill and Connolly. They were men of vision and courage. As we say in New York, they were stand up guys - the highest possible compliment.’

Concluding, John Samuelson said the TWU would continue to advocate strongly for workers rights and protections. "Joining a union was the one good chance working people have of being able to organise and fight back against poor pay and bad workplace practices," he said, stressing that the teachings of James Connolly and Mike Quill remained alive and relevant around the world to this very day.