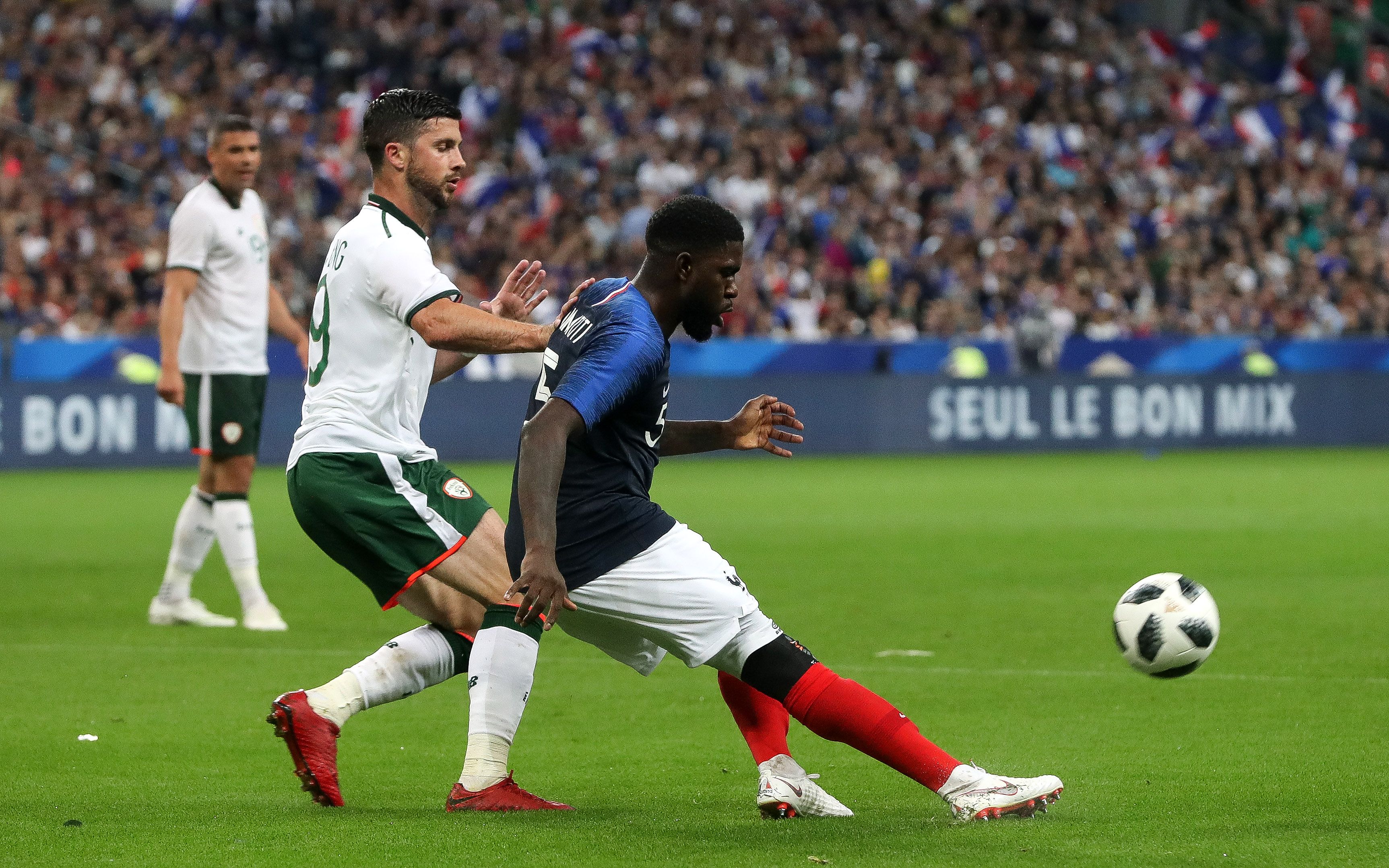 Republic of Ireland's Shane Long with Samuel Umtiti of France during a friendly international game at Stade de France in Paris in 2018. [Inpho/Ryan Byrne]

Shane Long, who was released by Southampton last week, could be on his way back to Reading. The 35-year-old Tipperary-born Irish international made 245 appearances for the Saints in all competitions over eight years, including 198 in the EPL. The club published a glowing tribute to the striker on Friday, highlighting among his 37 goals for the club and the 2017 stoppage-time winner at Liverpool in the EFL Cup semi-final. In April 2019, Long wrote his name into the EPL history books by scoring the competition’s fastest-ever goal, taking just 7.69 seconds to break the deadlock against Watford. His form in the run-in that season was integral to Saints maintaining their EPL status. Long joined Reading from Cork City in 2005 and also played for West Bromwich Albion and Hull City, before moving to Southampton in 2014. He won the last of his 88 Irish caps in a friendly against Qatar in March 2021 and while he was included in recent Stephen Kenny’s Irish squads, he didn’t play.

Meanwhile Robbie Brady, who was with Bournemouth last season, is now training with Preston North End and may sign for the Championship club.

And Ireland Under-21 international Gavin Kilkenny has signed a loan deal with Stoke City ahead of the new season. The 22-year-old Dubliner, who joined the Cherries from St Kevin’s Boys, helped Bournemouth secure promotion to the EPL last season. However, Kilkenny will now remain in the Championship having agreed the move to the team managed by former Northern Ireland international Michael O’Neill. Stoke’s first team coach Rory Delap, famous for his long throw-in, said: ‘‘We have been monitoring Gavin for a few years and we have taken the opportunity to bring him in.’’

Republic of Ireland Women’s manager Vera Pauw last week released a statement alleging that she was raped as a young player in the Netherlands. She said that she had suffered abuse and serious sexual assault during her time as a player and coach in Dutch football. Pauw said that to many she was seen as a brash and loud football coach, a tough woman who has risen to the top in a man’s world, adding that nothing could be further from the truth. Pauw detailed how she has tried to have her case heard by the football authorities in the Netherlands but has not received a satisfactory response. She has now decided to report her allegations to Dutch police The FAI also released a statement which said it has given its full support to Pauw at this difficult time in her life as she makes very brave revelations about her past. The association said it would make no further comment and asked that Pauw’s privacy be respected.

The FAI has published its accounts for 2021 ahead of its Centenary AGM, which will take place in the Mansion House, Dublin on July 23. The accounts confirm that the Association further strengthened its financial position in 2021, while continuing to manage legacy debt issues. A surplus of €6.7 million was recorded for the financial year 2021, based on turnover of €54.3m, up from a surplus of €1.6 million on turnover of €41.6 million in 2020. This surplus of €6.7 million has further improved the Association’s balance sheet position with the Association now having net assets of €2.7 million compared with a net liability position of €4 million in 2020. We probably won’t know the full details of the legacy debt until the AGM.

Ireland underage international goalkeeper Josh Keeley has left St Patrick’s Athletic and now joins EPL club Tottenham Hotspur. Keeley has represented Ireland from under 16 to under 19 level and made his first senior start for the Saints in the final game of last season against Finn Harps. The 19 year-old Dunboyne native was on the bench for St Pat’s FAI Cup final win over Bohemians last November. Spurs say that Keeley will join their development squad and link up with their under-21 team ahead of the new season. Keeley said: ‘‘I am absolutely over the moon to have signed for such a big club. It’s a very proud moment and a great achievement for me and my family. It’s every kid’s dream to sign for a team in England.’’

Sadio Mane recently left Liverpool for Bayern Munich, but the good news for Liverpool fans is that Mo Salah signed a new three-year contract last week that will keep him at the club until 2025. The Egypt international had entered the final year of his existing deal and negotiations over extending his stay had been taking place for most of last season. His new contract is reported to be worth £350,000 a week.

Irish international goalkeeper Matt Travers has agreed a new five-year deal with Bournemouth, a reward for his exceptional contribution to their Championship season. Travers, who hails from Maynooth, established himself as number one under Scott Parker at Bournemouth seeing off competition from new recruits to play a key role in the Cherries return to the EPL. He kept 20 clean sheets in 45 appearances and scooped the club’s player of the season award. As a consequence, he has signed a deal which keeps him at his first senior club until the summer of 2027.

When Aiden McGeady lines out for Hibernian against Clyde in the Scottish League Cup on Saturday next, it will be his first competitive game for a Scottish club since his £9.5 million move from Celtic to Spartak Moscow in August 2010. The Scottish-born winger, whose grandparents hailed from Donegal, was the first Irish international to sign for a Russian club. McGeady has been described as a marquee signing by Hibs manager Lee Johnson, but that’s not a label the player agrees with. He said: “How am I be a marquee signing at 36? I signed on a free transfer. I know what I’m capable of, but I didn’t think I would be a marquee signing. I would probably put that down to someone who cost £3million, or a younger player who has come in. It’s 12 years since I left Celtic. I’ve not played in the league for a long time. But I suppose it’s a compliment.” When he played for Celtic McGeady got abuse from away fans after declaring for The Republic. “At this stage I don’t think I have anything to prove really, except maybe to myself,’’ he added.

Cork-born David Meyler was not impressed with the news that a former England under-21 defender Jake Clarke-Salter saying he is “open” to switching international allegiances. Clarke-Salter, who won the under 20 World Cup with England in 2017, has opened the door for a move to the Boys in Green. Now 24, Clarke-Salter has played for a variety of Championship clubs on loan and is currently with QPR. Clarke-Salter qualifies for Ireland through his grandmother but has only represented England internationally in his career thus far. Meyler said on Twitter: ‘‘He is open to playing, this is not club football.’’

Derby County’s protracted purchase by new owners was officially confirmed last week, ensuring that the Rams have staved off the threat of extinction. Bought out by local businessman David Clowes, Derby can now begin their summer transfer business, with a number of Irish names linked to stay, depart and arrive at the club. Liam Rosenior has been appointed manager, replacing Wayne Rooney. Irish international Jason Knight was highly rated by Rooney and there is speculation that Conor Hourihane may join the club from Aston Villa.

Shamrock Rovers go into European action this week against Hibernians of Malta knowing that have a 10-point lead at the top of the League of Ireland Premier Division. Last Monday week The Hoops beat St Patrick’s Athletic 2-1 in a re-arranged game at Inchicore and on Friday night a goal from Rory Gaffney game them all three points in a 1-0 away win over Finn Harps. Dundalk, who beat UCD 3-0 at Oriel Park on Friday night, stay second, a point ahead of Derry City, who beat Bohemians 3-2 at Dalymount Park.