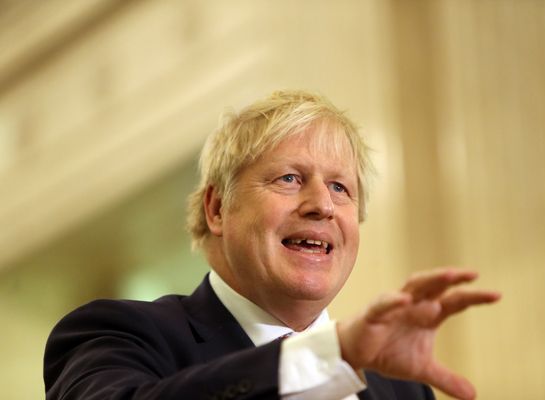 The fate of the Northern Ireland, power sharing politics and Anglo/Irish relations were collectively up in the air today with the announcement by Boris Johnson that he would resign as leader of the British Conservative Party and quit his job as prime minister in the autumn.

At time of writing there were strong indications that Johnson might not last nearly that long in Number 10.

A consequence of the chaos surrounding Johnson has been the resignation of Northern Ireand Secretary of State Brandon Lewis.

Lewis is getting a verbal sendoff from Sinn Féin Stormont leader Michelle O’Neill and it is not warm and complimentary.

O'Neill accused Lewis of “shamefully" placating the DUP during his time in office.

Lewis has joined the ranks of Conservative ministers leaving office in a mass move against Johnson.

O'Neill, according to a report in the Irish News, said that Lewis had “abandoned any pretense of acting with the ‘rigorous impartiality’ required of him under the Good Friday Agreement."

“He has shamefully placated the DUP by giving them political cover in denying the electorate the democratic representation they are entitled to,” she said.

O’Neill, according to the report, was also critical of Lewis over his proposed bill for dealing with Northern Ireland’s troubled past - the Northern Ireland Troubles (Legacy and Reconciliation) Bill which offers an effective amnesty for Troubles crimes for those who co-operate with an information body.

O'Neill said: “He has undermined the Good Friday Agreement and political stability, and his actions gave us a daily reminder why those with no mandate or votes here will only ever act in their own political interests, and not ours.

“The political stability of the North cannot be a hostage to the Tory-in fighting, Westminster chaos and continued DUP disruption.”

The Stormont Assembly remains moribund amid a row over the Northern Ireland Protocol which has been coming under assault in recent weeks from Johnson's government, this despite the fact that the same British government agreed to the Protcol in a deal with the European Union.

SDLP leader Colum Eastwood welcomed reports that Johnson is to resign as prime minister claiming he had “debased the office he holds."

“He has fundamentally and indelibly damaged public confidence in politics and public life and his death grip on power has prolonged a period of government that will be characterised by law-breaking, scandal and sleaze. He should now leave government immediately,” he said