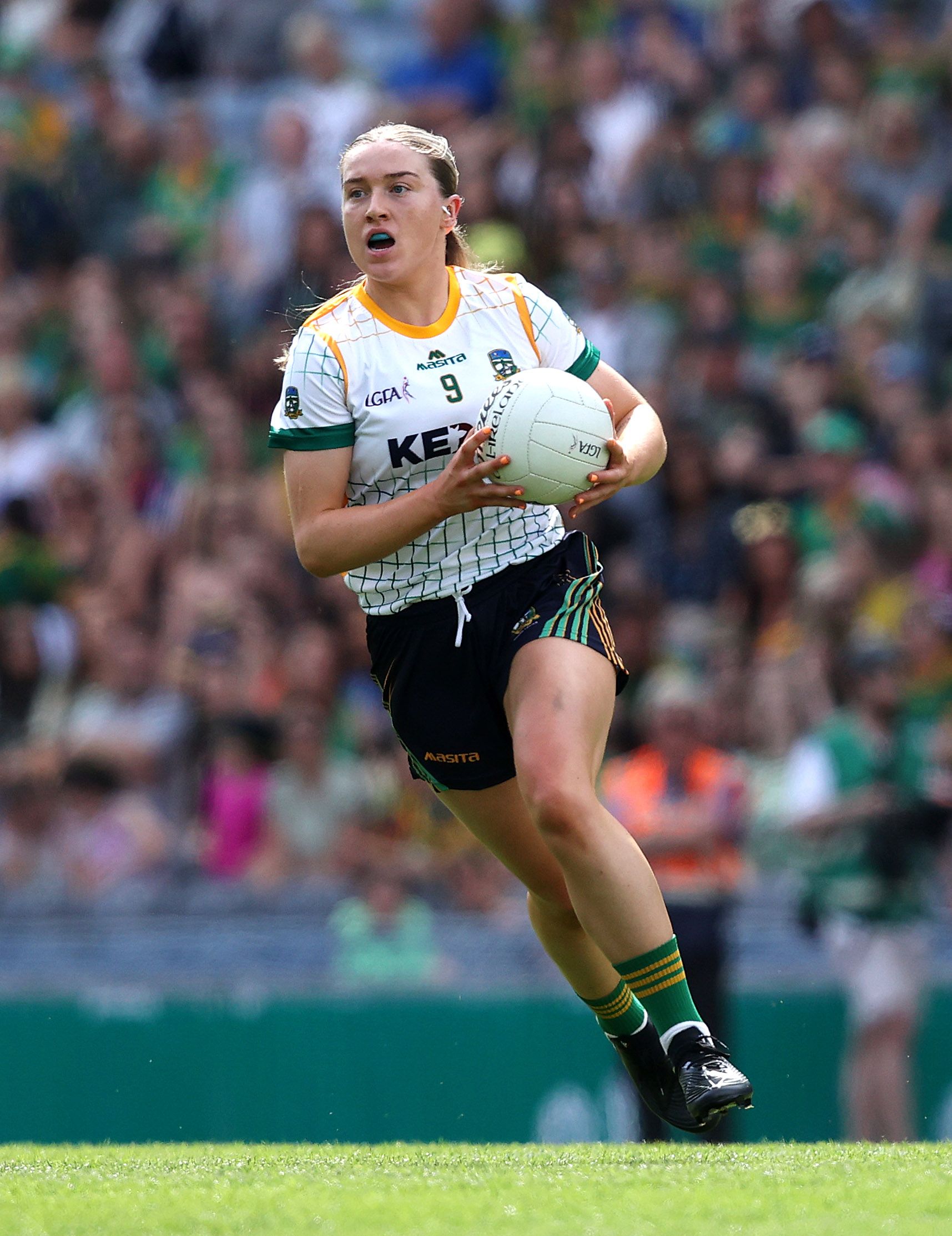 Orlagh Lally in action for Meath in the semifinal against Donegal. EVAN TREACY/INPHO

Next Sunday will be the first of two “ladies’ days” in Croke Park, with the finals of the senior, intermediate and junior football finals. The following Sunday it will be camogie’s turn to stage their three finals.

Meath, who won the Brendan Martin Cup for the first time last year and in doing so prevented Dublin from making it five in a row, are back in the football final where they will meet Kerry. It was a great achievement last year by Meath to win the senior final, as they had only been promoted to the senior ranks for the first time in 2020.

Meath have many stars and their two big names are Dunboyne clubmates Vicki Wall and Emma Duggan. Wall is set to join Aussie Rules club North Melbourne next month, but Duggan, who is still a student, says she has no immediate plans to try Aussie Rules. They had a narrow win over Donegal in their semi-final, while Kerry had an easy win over a young Mayo team in their semi-final.

Prior to the pandemic the Ladies finals were attracting huge attendances and in September 2019 a record crowd of 56,114 saw Dublin beat Galway to make it three in a row.

Maggie Farrelly from the Laragh club in Cavan is the referee for the big game. She is one of the top females referees in the country and has also taken charge of men’s inter-county games. This will be Farrelly’s second senior final, having refereed the 2014 final between Cork and Dublin. Laois will play Wexford in the Intermediate final, while the Junior final will be contested by Antrim and Fermanagh.

The Charity Shield, now renamed as the Community Shield, traditionally kicks-off the EPL season. This season’s Community Shield final between Liverpool and Manchester City will be played at Leicester’s Filbert Street ground on Saturday next. Wembley Stadium is not available as it will host the Women’s Euro 2022 final.

The Championship season gets under way on Friday night when Huddersfield play Burnley, where Irish international Josh Cullen is expected to make his debut for the Clarets.

There is a full series of Championship games on Saturday. As usual the Championship will be a tough division to win or get promoted from. Already the bookmakers are making Burnley, Norwich City and Watford, who were all relegated last season, joint favorites to be promoted thanks to the ‘parachute payments’ they get from the EPL. Hopefully the Irish internationals at Norwich, Andrew Obamidele and Adam Idah, who were both injured at the end of last season, will be back. The Canaries start away to Cardiff.

Just three days after stepping down as Waterford senior hurling manager, Liam Cahill was appointed manager of his native Tipperary. The Ballingarry native was been handed a three-year term four days after Colm Bonnar was ousted one year into what was also a three-season agreement. Cahill’s coach at Waterford, Michael Bevans of Toomevara, will be joining him in the Tipp backroom team. A former senior player with Tipperary, Cahill managed the Tipp minor and under 21 teams before getting the Waterford job in 2019.

Meanwhile Donegal are looking for a new football manager after Declan Bonner quit last week after five years in charge. And Shane Roche has stepped down as Wexford senior football manager. He took the reins on an interim basis after Paul Galvin’s abrupt resignation in September 2020. And in Longford Billy O’Loughlin has stepped down as senior football manager after just one season in charge. The Laois native cited work- related commitments which involves more travel to the US as the reason behind his resignation.

Eoin Kenny, the son of Republic of Ireland manager Stephen Kenny, has been called up to the Northern Ireland under18 squad. Kenny qualifies to play for Northern Ireland having been born in Derry during his father’s time as manager of Derry City. The midfielder plays for the Dundalk youth team, having come up the ranks at Oriel Park. Kenny is one of three new players in the Northern Ireland squad. Also included for the first time are Derry City defender Conor Barr and Accrington Stanley winger Lewis Trickett. They join the squad for two games against Manchester United’s under-18 side as part of the Super Cup NI tournament. Caps will not be awarded for this week’s game and if Kenny plays for Northern Ireland in one of the two games it does not affect his eligibility for the Republic. Northern Ireland under 18’s played Manchester United at the Coleraine Showgrounds on Monday night, and they meet again at the Ballymena Showgrounds tonight.

Cian Lynch who missed Limerick’s All-Ireland final win over Kilkenny, expects to miss the entire Limerick  county championship campaign for Patrickswell as a result of the damaged ligaments he suffered during a training game a week before the final. Lynch said: “It’s the ligaments down around the fibula and tibia ligaments that connect to the ankle, all of those ligaments are kind of gone. I think I am going to be out for another three months at least.’’ After working his way back from a serious hamstring tear that threatened his participation in this year’s championship, it was tough on Lynch to injure his ankle a week out from the final.

The death occurred recently of former Ireland and Lions hooker Ken Kennedy at the age of 81. He died while on holiday in Connemara.

Kennedy, a London-based medical doctor, was Ireland’s first-choice hooker for a decade, winning 45 caps between 1965 and 1975 which at the time was an Irish record for a player in his position. He was born in Kent, but his father, a Royal Navy doctor, moved the family back to Holywood, Co. Down.

Ken Kennedy, who qualified in medicine at Queen’s University Belfast, won four Test caps in Australia and New Zealand in 1966 and also played the unofficial role of medical officer in 1974 on the Lions tour of South Africa at a time when the Lions squad did not have a traveling doctor.

Kennedy worked as an orthopaedic physician at Guys and St Stephen’s Hospital, St Mary’s Abbots and held the position of Medical Director of Rehabilitation at the Royal Star and Garter Hospital until 2003 when he set up a successful sports injury clinic.