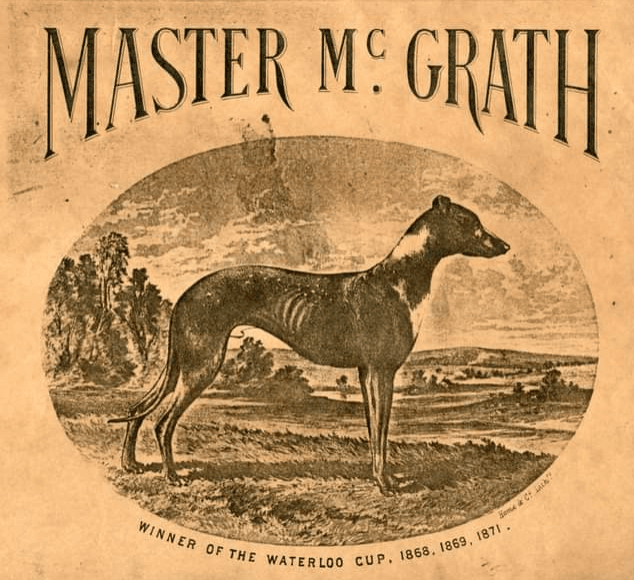 Arguably the most famous greyhound ever, Master McGrath was the first racing dog to win the prestigious Waterloo Cup three times. A massive celebrity in his own right with hundreds of thousands of fans, Master McGrath was so renowned that Queen Victoria requested he be brought to Windsor Palace so she could see with her own eyes the champion race hound. Known as “the immortal black',” he lost only once in 37 races he took part in. Though Master McGrath died a century and a half ago, his memory is preserved in poetry, song, paintings and sculptures both in Ireland and here in the United States. Perhaps what is even more amazing than the greyhound’s success is the fact that the dog was supposed to be put down, but somehow miraculously survived to gain immortality.

There are many conflicting accounts of the dog’s birth and earliest days. Some claim that he was whelped in County Waterford, at the home of James Galwey, but other versions, legends perhaps, claim that Master McGrath was born rather further north. In the early 1860s, Lord Lurgan, the richest man in the town of Lurgan, Co. Armagh and the owner of its most imposing building, the 36-room Brownlow House, began to breed greyhounds. In 1866, he bred his top bitch Lady Sarah to Devrock and a litter of three puppies was born. Lurgan considered three too many and ordered the smallest of the puppies drowned. Wilson, Brownlow’s servant, following his master’s orders, threw the tiny puppy into a stream behind Brownlow House and the dog, nearing death, floated a half mile up the stream to where a farmer named McGrath owned land. One of the farmer’s sons was fishing with a hand net when he spotted the puppy and fished him out of the stream. The boy brought the nearly drowned puppy into the house wrapped in a blanket and put him in front of the fire, which revived the greyhound.

The boy named the dog “Sailor” and the following year the McGraths entered the dog in the Visitor’s Cup, whose prize money was paid by Lord Lurgan, who had also entered his top  reyhounds in the race. Sailor defeated all the greyhounds in each race in the cup so easily that it attracted the attention of the lord who inquired about the animal’s pedigree. McGrath told him that the dog not only had no pedigree, but also the story of how the dog was fished out of the stream. After hearing the story Lurgan replied, “By Jove, I knew it. He is one of my puppies. No dog in the land could have performed so well, except a puppy of Lady Sarah.” Lurgan told McGrath that he wished to buy Sailor, but at first McGrath refused. Eventually, he sold the dog for £20 and gave McGrath his best cow too. Lord Lurgan renamed the dog Master McGrath in honor of the young boy who had fished him out of the stream.

A good story, but whatever the truth of his origins, the chroniclers are agreed that in 1868, Lord Lurgan entered the unknown black greyhound weighing only 54lbs in England’s Waterloo Cup, which was a grueling elimination tournament between 64 coursing greyhounds from England and Ireland. The diminutive Irish greyhound quickly won the adoration of 10 of thousands of spectators.  He sailed through the rounds and went on to win the Waterloo Cup in fine style - defeating the odds-on favorite Cock Robin in the final. Master McGrath returned the following year and repeated his victory.

A tragic accident nearly killed the greyhound and prevented him from winning the Waterloo Cup for the third time in a row. Lord Lurgan sent the Master with his trainer John Walsh from Ireland to England the following year. In sub-zero temperatures the course was declared fit for competition (although many disagreed) and 1870 cup final proceeded. The course was run on the Salt Marshes between the railway and the frozen river Alt. McGrath and several other dogs ran onto the river ice and fell through into the freezing cold river. Luckily an Irishman named  Michael Wilson saved the great dog from a watery grave by jumping   into the river and dragging the dying Master McGrath back to the riverbank. It was the only race Master McGrath would ever lose.

The greyhound returned to Ireland, but Lord Lurgan on account of the accident decided the great dog's racing days were over and retired him to stud. Lord Lurgan, however, would change his mind. The greyhound regained his fitness and Lurgan decided to enter Master McGrath in Ireland's premier greyhound event, the Brownlow Cup. Now known as "Mighty" McGrath by his huge fan base, Lord Lurgan decided to enter the greyhound in the Waterloo Cup in hopes of becoming the first dog ever to win the cup three times. This time the weather was fair, but the book makers labeled an English greyhound as the favorite to win the race. Nevertheless, Master McGrath defeated the English greyhound and registered his place forever in the greyhound history books and in Irish hearts.

And so the "Mighty" McGrath returned to Ireland in order to spend the rest of his years in retirement - but this was not to be. He died early in 1873 of pneumonia - a legacy perhaps of that terrible fall into the freezing water of the river Alt. All of Ireland mourned his passing. Lord Lurgan requested an autopsy, which revealed that the Master possessed a heart as big as a man's. It was twice the size of a normal greyhound of his weight and this probably accounts for his tremendous racing stamina. The Brownlow family had the Master incorporated in their family crest and the dog was also commemorated with a special edition Irish sixpenny coin.

A sculptor afterwards took a cast of the dog. He was buried in the grounds of a house called "Solitude" in Lurgan. Today a statue of the great greyhound occupies the high street in Lurgan and a Master McGrath in Dungarvan, the only public monument to any greyhound in the Republic but one of three to this special dog. Master McGrath’s memory lives on in poetry and song.  A ballad was composed by an unknown author in his honor, which became famous when Ronnie Drew and the Dubliners recorded it.

The Ballad of Master McGrath

Eighteen sixty-nine being the date and the year,
Those Waterloo sportsmen and more did appear;
For to gain the great prizes and bear them awa',
Never counting on Ireland and Master McGrath.

On the twelfth of December, that day of renown,
McGrath and his keeper they left Lurgan town;
A gale in the Channel, it soon drove them o'er,
On the thirteenth they landed on fair England's shore.

And when they arrived there in big London town,
Those great English sportsmen all gathered round -
And one of the gentlemen gave a "Ha! Ha!" Saying,
"Is that the great dog you call Master McGrath?"

And one of those gentlemen standing around
Says, "I don't care a damn for your Irish greyhound,"
And another he laughs with a scornful "Ha! Ha!
We'll soon humble the pride of your Master McGrath."

Then Lord Lurgan stepped forward and said, "Gentlemen,
If there's any among you has money to spend -
For your grand English nobles I don't care a straw -
Here's five thousand to one upon Master McGrath."

Then McGrath he looked up and he wagged his old tail,
Informing his lordship, "I know what you mane,
Don't fear, noble Brownlow, don't fear them, agra,
For I'll tarnish their laurels," says Master McGrath.

And Rose stood uncovered, the great English pride,
Her master and keeper were close by her side;
They have let her away and the crowd cried "Hurrah!"
For the pride of all England - and Master McGrath.

As Rose and the Master they both ran along,
"Now I wonder," says Rose, "what took you from your home;
You should have stayed there in your Irish domain,
And not come to gain laurels on Albion's plain."

"Well, I know," says McGrath, "we have wild heather bogs
But you'll find in old Ireland there's good men and dogs.
Lead on, bold Britannia, give none of your jaw,
Stuff that up your nostrils," says Master McGrath.

Then the hare she went on just as swift as the wind
He was sometimes before her and sometimes behind.
Rose gave the first turn according to law;
But the second was given by Master McGrath.

The hare she led on with a wonderful view.
And swift as the wind o'er the green field she flew.
But he jumped on her back and he held up his paw
"Three cheers for old Ireland," says Master McGrath.