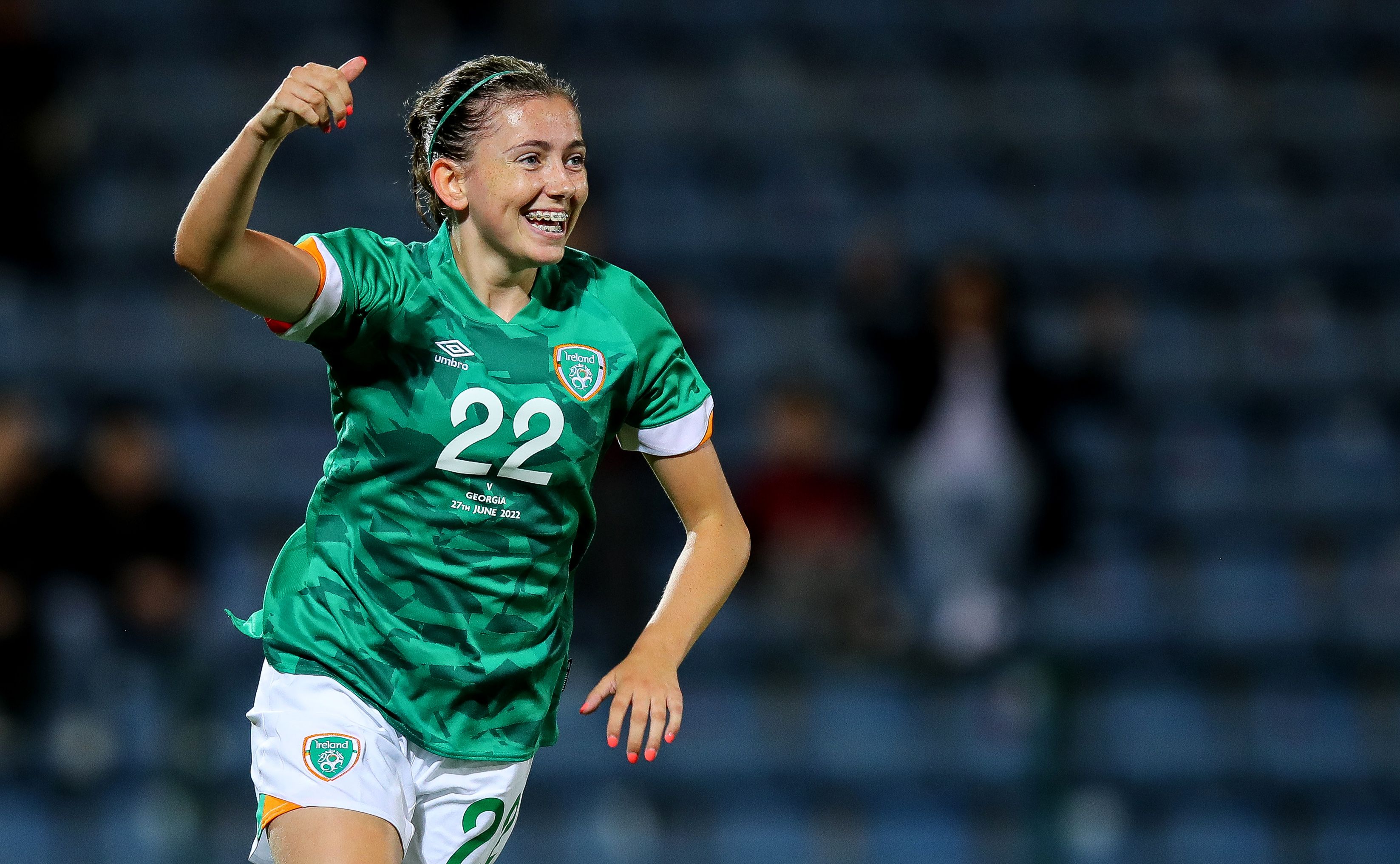 Equaling their best ever away win, the Republic of Ireland Women's National Team jumped up to second place in Group A on Monday night and are in good shape chasing a Play-Off spot to reach the 2023 FIFA Women's World Cup.

Vera Pauw's team were 9-0 victors in Gori - which matched the scoreline that Ireland recorded away to Malta in 2003.

Katie McCabe's hat-trick moved her up to second place in the WNT All-Time goalscoring charts - one behind Denise O'Sullivan whose goal moved her onto 18.

There was a first senior goal for 17-year-old Abbie Larkin and veteran defender Niamh Fahey also got her first goal on the evening of her 104th appearance. Megan Connolly - who was selected as Sky Player of the Match - got the other goal.

Republic of Ireland defender Darragh Lenihan has joined Middlesbrough from Blackburn Rovers. Lenihan, the first Meath man to play for Ireland, has agreed a four-year deal with Boro, who like Blackburn are also in the English Championship. A move was expected after the 28-year-old central defender turned down a new contract offer from Rovers, for whom he has played 200 times.

Boro manager Chris Wilder, who tried to sign Lenihan when he was manager of Sheffield United, is a big fan. “I have been a huge admirer of Darragh for a long time, in terms of his qualities he brings as a player, as a person, as a competitor, as a warrior, and a leader of men,” Wilder said. “He is a proper football player and I'm delighted. One of the things I looked at, at the end of the season, was the culture and personality of the team. Without dwelling too much, we put ourselves in a fantastic position for promotion to the EPL and didn't get over the line. For me, perhaps it was because of the personality of the team. We didn’t have enough players who really could dig in and grab that opportunity. Darragh plays under pressure. He is a difficult opponent. He wants to win.’’

Lenihan won two caps under Martin O’Neill in 2018 and won his first cap under Stephen Kenny in the 1-1 draw with Ukraine in Lodz two weeks ago.

Darragh Lenihan has agreed a four-year deal with Middlesbrough.

Liam Scales has joined Aberdeen on a season-long loan from Celtic. The 23-year-old, who can play at centre-back or left-back, joined Celtic in 2021 from Shamrock Rovers. He featured on nine occasions for Glasgow club, and scored two goals. Now Aberdeen’s Waterford-born manager Jim Goodwin is said of the Wicklow-born defender, ‘‘Liam is a player that I have been trying to get for the last couple of years. I watched him very closely during his time at Shamrock Rovers, unfortunately I couldn’t get a deal done. He is a strong character with a winning mentality, who will no doubt be a great addition to the squad.’’

Also in Scotland Hibernian have signed former Irish international Aiden McGeady. The Scottish-born winger, who qualified for Ireland via the grandparent rule, played under Hibs manager Lee Johnson at Sunderland.

Wayne Rooney has stepped down as manager of embattled Derby County on Friday last. The former Manchester United, Everton and England forward ended his playing career with the Rams before taking his first step in management with the club in November 2020. Derby were plunged into administration at the start of last season and were relegated from the Sky Bet Championship despite Rooney leading a valiant fight against the drop in the face of a combined 21-point deduction. Rooney said: ‘‘Over the course of the summer I have been closely following developments regarding the ownership of Derby County. My time at the club has been a rollercoaster of emotions, both highs and lows, but I have to say that I have enjoyed the challenge. I feel the club now needs to be led by someone with fresh energy and not affected by the events that have happened over the last 18 months.’’

Ryan Giggs resigned as Welsh manager last week. The former Manchester United player said that ‘‘he did not want the country’s preparations for the World Cup to be affected, destabilised or jeopardised in any way by the continued interest around his court case.’’ Giggs was suspended by the Welsh FA after Police were called to a disturbance at the Gigg’s home in the Worsley area of Greater Manchester in November 2020. Robert Page took temporary charge of the Welsh team and he has been in charge since then. Earlier this month Wales beat Ukraine in a play-off to qualify for the World Cup finals for the first time since 1958. Giggs has pleaded not guilty to controlling and coercive behaviour against his ex-girlfriend Kate Greville between August 2017 and November 2020.He has also pleaded not guilty to assaulting Ms Greville causing her actual bodily harm, and common assault of her younger sister, Emma Greville, at his home in Worsley, Greater Manchester,  in November 2020.

Meanwhile Welsh star Gareth Bale has agreed a one-year deal with Los Angeles FC. The 32 year-old was a free agent, having left Real Madrid after nine years in Spain, with a spell on loan back at Tottenham in 2022-21.

Irish League club Linfield beat World Cup hosts Qatar 1-0 in a friendly in Marbella last week. The Irish League champions are on a pre-season training camp in Spain and won 1-0 thanks to a goal from Chris McKee.

The Republic of Ireland remain in 47th place in the FIFA world rankings, after the hierarchy was updated and adjusted to reflect this month’s Uefa Nations League games. The Republic is nestled between Mali and Greece, their highest ranking since they were rated as 42nd in February 2021, prior to World Cup qualifying defeats to Serbia and Luxembourg. Northern Ireland have dropped four places to 58th. Brazil are in top spot, with Belgium second, Argentina third, and France fourth.