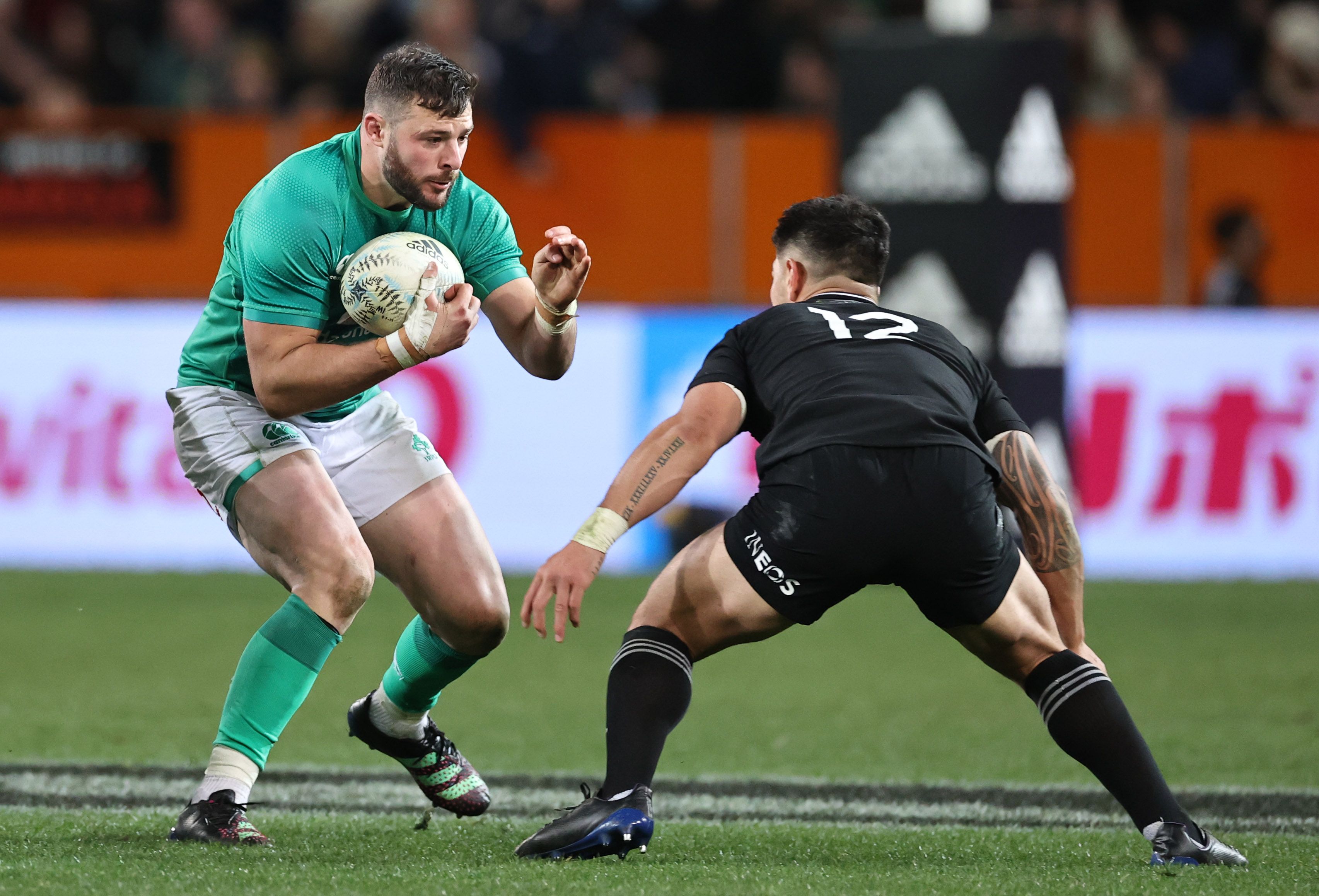 Ireland’s Robbie Henshaw is confronted by the All Blacks's Quinn Tupaea. [Inpho//Billy Stickland]

Oh ye of little faith! After the first test no one could see anything working out right for Head Coach Andy Farrell or his enlarged squad on this mini-New Zealand tour.

One week later and the faceless and cowardly keyboard warriors were forced into silence as Johnny Sexton – the chief target of many of these social media scrawls – proved himself a man apart in leading Ireland to a historic and memorable victory on Kiwi soil for the first time in Dunedin.

The win was all the more remarkable as it came one week after Ireland were blitzed 42-19 in Auckland. It means the three test series is perfectly poised for this Saturday’s denouement – and it will be interesting to see if Ireland can deliver a second straight reverse to their hosts and win the series.

A proud Farrell declared after the game: “We always get a response, don't we? Everyone knows that, history tells you that. We’re used to it by now. We’ll look forward to that. We've created a little bit of history for ourselves, little old Ireland, but we've earned the right to take it to the last weekend to see what we can do in the final week.

“The players back themselves against anyone and the more we can keep giving them these occasions of playing the best teams in the world, the better they're going to get.”

Ireland showed great self-belief by taking the game to their opponents from the kick off and had a try to show for this positivity within three minutes as Andrew Porter was set free by an expertly timed Sexton delivery to earn a 7-0 lead.

The All Blacks showed severe indiscipline in the opening quarter and while they saw a red and yellow card, referee Jaco Peyper should have shown two red cards and awarded a penalty try to Ireland.

Leicester Fainga'anuku was very, very late on Mac Hansen and collided in mid-air with the winger’s head. Peyper’s logic to talk that down to a yellow took  a bit of understanding as did the logic in not awarding a try for Garry Ringrose earlier when tackled without the ball. Such baffling decisions should see him officiate less and less if that is the sort of thinking is all he is capable of under pressure.

Angus Ta'ava's 31st-minute red card for a head butt of Ringrose, albeit not deliberate, meant Ireland should have kicked on with a series of penalties to establish more than a 10-0 lead by the break. Instead they were only 10-7 ahead as Beauden Barrett got in for a seven pointer under the post in one of the home team’s few forays into the Irish 22.

Farrell was frustrated that his team didn’t take advantage of two players being off the pitch, though James Ryan also saw yellow before the break when New Zealand got their points.

He said in retrospect: “I suppose the most impressive thing that we are doing pretty well at this moment in time is understanding where we're at, each moment at a time and staying calm and not getting too overawed or frustrated with errors or decisions or not executing.

“We're pretty good at trying to stay neutral and stay on task and it's helping us to play in these big games and compete.”

Two Porter tries converted by Sexton as well as three penalties by the out-half accounted for Ireland’s 23 points. All New Zealand could muster in the second half was a late consolation try by Will Jordan with time almost up.