Home Opinion EDITORIAL: We The People 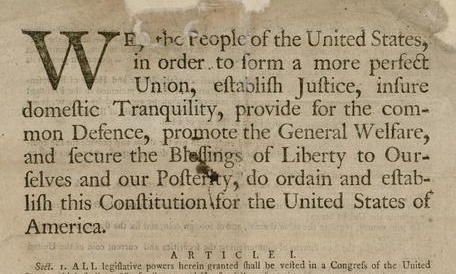 EDITORIAL: We The People

"We the People of the United States, in Order to form a more perfect Union, establish Justice, insure domestic Tranquility, provide for the common defence, promote the general Welfare, and secure the Blessings of Liberty to ourselves and our Posterity, do ordain and establish this Constitution for the United States of America."

The preamble to the Constitution is a simple statement, clear and to the point. It is a vision of a united country striving to promote peace within its own borders, and tranquility among its inhabitants.

It was, and remains, a very good idea.

Of late, however, peace and tranquility has been, to say the least, elusive. Or to look at it another way, citizens have distinctly different visions of what domestic tranquility actually looks like.

Nobody ever said that forming and maintaining a more perfect union was going to be easy. The history of the United States, the Civil War to the fore, clearly demonstrates the kind of difficulties that arise when "we the people" go about often diverging ways of doing things.

In recent years, in recent days, we have been all too aware of divergence, of sharply differing views of how America should conduct its internal life.

Thus far, thankfully, we have managed to provide for a common defense. When it comes to promoting the "general welfare" we appear to fall short in certain areas. Suffice to say, some Americans enjoy a very specific and abundant welfare, while all too many depend on a literal form in order to stave off poverty and indeed homelessness.

As Americans, we rightly take pride in the many extraordinary achievements of our country since its founding 246 years ago.

America had led mankind forward in an array of areas, fields, and achievements.

But past glories are just that. We much always be conscious of the present, aware of the future, and ambitious for it.

We are urged to keep striving, reaching, dreaming.

We read and hear much these days of a divided nation, of red and blue states. Recent decisions by the Supreme Court have served to underline this perception, indeed this reality.

It may well be the case that the future union that is the United States will be a relationship between states with significantly differing views on how to "establish Justice, insure domestic Tranquility, promote the general Welfare, and secure the Blessings of Liberty to ourselves and our Posterity, do ordain and establish this Constitution for the United States of America."

What is left out of that segment is the promotion of a common defense. Regardless of current argument and differences between the states there is no indication of any stepping back from the idea that the United States is a single entity and needs to be defended as such.

For that, at least, we can be thankful.

But what of the other requirements in the Preamble? Clearly there are differing views as to how they can be achieved and preserved.

The current state of political discourse would give little reason to believe that a collective tranquility is the order of the day. Quite the opposite.

We clearly need political leaders who can present a vision that all, or most of us, can at least partially relate to.

Such is the ultimate requirement of workable politics. We can argue and debate for sure, but at the end of it all we should be able to forge compromises and move on.

The fact that the United States has lasted for 246 years speaks to an ability to seek and secure compromise, even in the face of extraordinarily divisive viewpoints and tragic events.