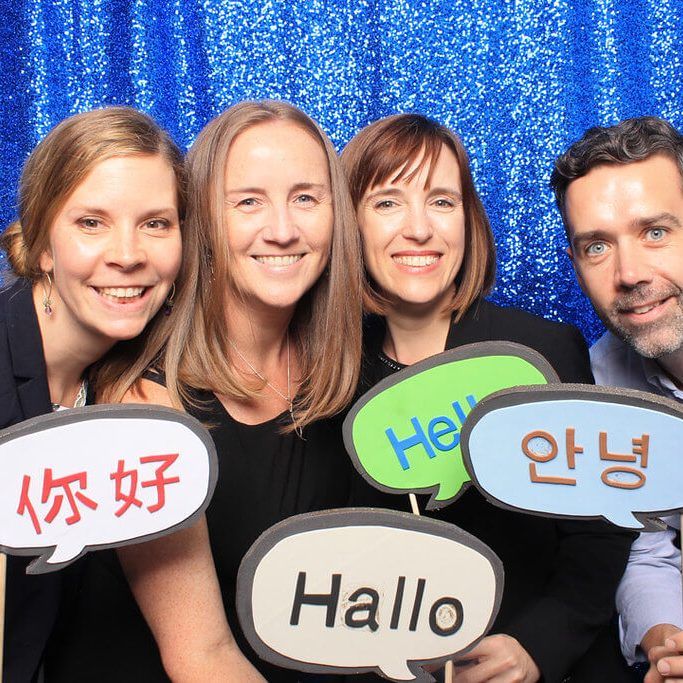 Siobhan Lyons, second from right, has long focused on immigrants and immigration.

“International relations is for everybody,” said Siobhan Lyons. “I’m so proud of the programs that we’ve developed during my time at Citizen Diplomacy International, particularly for the next generation. Exposing our young people to the world outside Philadelphia and real-life experiences that are different to theirs can completely change their perspective. For Philadelphia to thrive, it’s critical for the world to know about our city and that Philadelphians are exposed to the world.”

Lyons understands this as the daughter of a diplomat. She was born in Ireland but moved to Nairobi when she was 4 years old and has lived in the U.K, Germany, Kenya, Saudi Arabia, Egypt, Syria, Jordan, and Singapore, as well as the United States. “I first met Siobhan when I worked alongside her father to establish the first resident Irish Embassy in Kuala Lumpur, Malaysia in 1995,” said Irish diplomat Helena Nolan, currently Consul General of Ireland in New York.  “Since meeting Siobhan again in Philadelphia and New York, I can see how much she has benefited from the experience of living and working in a range of countries and cultures and how she continues to be a dynamic connector and an influencer, seeking to bring people together and to support cultural and business exchange for mutual benefit, including in her work on behalf of the Irish American communities here.”

Lyons joined Citizen Diplomacy International in 2016, overseeing the organization’s first leadership transition in nearly 30 years. She immediately set about building a robust diplomacy organization and growing Philadelphia’s international profile as a welcoming city and destination for international business and visitors. Under her leadership, Citizen Diplomacy International has welcomed over 5,000 overseas visitors to Philadelphia; created a diversified membership of local Citizen Diplomats; built a strong financial foundation so that the organization could weather the pandemic; and aligned the organization’s programs with the City’s economic and civic priorities - generating $2.3 million per year for the region. She also expanded the youth programs to bring international exchange to students who had never considered traveling abroad and launched the first teen virtual exchange program, the Citizen Diplomat Academy. “My favorite moment was when students from the Mayor’s Community Schools took part in an exchange with a culinary school in our Sister City Florence. The program opened their eyes to the vast opportunities that exist outside the United States and that their careers in culinary arts and hospitality have a global future.”

Lyons has focused on immigrants and immigration since arriving in Philadelphia in 2006. “Siobhan is a connector and a champion for the City of Philadelphia,” said Peter Gonzales, President and CEO of Philadelphia’s Welcoming Center. “She exemplifies how immigrants use their international experience to elevate our city. She has a vision for what Philadelphia can be on a global scale and has worked to make that a reality in every role she’s occupied.”

Prior to joining Citizen Diplomacy, Lyons served as the executive director of the Irish Diaspora Center (formerly known as the Irish Immigration Center) in Upper Darby outside of Philadelphia. The Center offers senior outreach, immigration, legal, and other services for the Irish and Irish-American communities in the Philadelphia region. “Siobhan turned the Center around,” said John O’Malley, Board Member of the Irish Diaspora Center, and Chair of Trademark/Copyright Practice Group at Volpe and Koenig. “She is an activator, someone who loves change, and who is comfortable with being uncomfortable. But most importantly, as an immigrant, she saw opportunities to do something different with the Center right when we needed it.”

She also established a partnership with the Brehon Law Society, organizing three international conferences to raise awareness of the business opportunities that exist between Ireland and Philadelphia. The Brehon Law Society is a professional association that fosters the work of law among individuals of Irish ancestry. It is comprised of judges, lawyers, law students, and provides a forum for educational, cultural, and social activities concerning Irish heritage and tradition. “Siobhan has a knack for seeing opportunities,” said Kevin Kent, Former Chairman of Philadelphia’s Irish American Business Chamber and Network. “Her ties with Ireland represent so many future possibilities for Philadelphia.”

Outside of her work, Lyons serves as the chair of Second-Generation Political Action Committee in Philadelphia. Second Generation promotes the political engagement of immigrant communities and supports emerging immigrant candidates. “Her leadership at Second Generation has been invaluable in shaping the organization,” said Ryan Alsayegh, Executive Director of Second Generation. In her four years with the PAC, Siobhan encouraged over 20 challengers to run and supported 10 candidates in winning in races across Pennsylvania. “As the child of immigrants from India, it was a great honor to have earned the endorsement of Second Generation,” said State Senator Nikil Saval. “Siobhan and I share the belief that America is stronger when immigrants are included in civic life. A society that works for immigrants, works better for everyone.”

“Every organization she’s touched since she arrived in Philadelphia, she’s made stronger and more robust because she’s so passionate about making things better for everyone,” said Steve Kelly, chair of Citizen Diplomacy International and Chairman and Co-Founder at Imagine360, a leading healthcare solution healthcare provider in Philadelphia. “Siobhan has been an extraordinary leader during a difficult time for Citizen Diplomacy. Her track record for leading through change, adapting, and innovating has engaged more Philadelphians than ever in international affairs and Citizen Diplomacy is a stronger organization because of Siobhan’s leadership. She cares deeply about an engaged and diverse community.”

Lyons will continue to serve as a consultant to support Citizen Diplomacy International’s programs. There will be a celebration of Siobhan’s departure on Wednesday, July 27, 2022 from 5:30-8 p.m. at ALOFT Philadelphia. RSVP at www.cdiphila.org; registration is free but a suggested donation to the Citizen Diplomat Academy Youth exchange program is recommended.