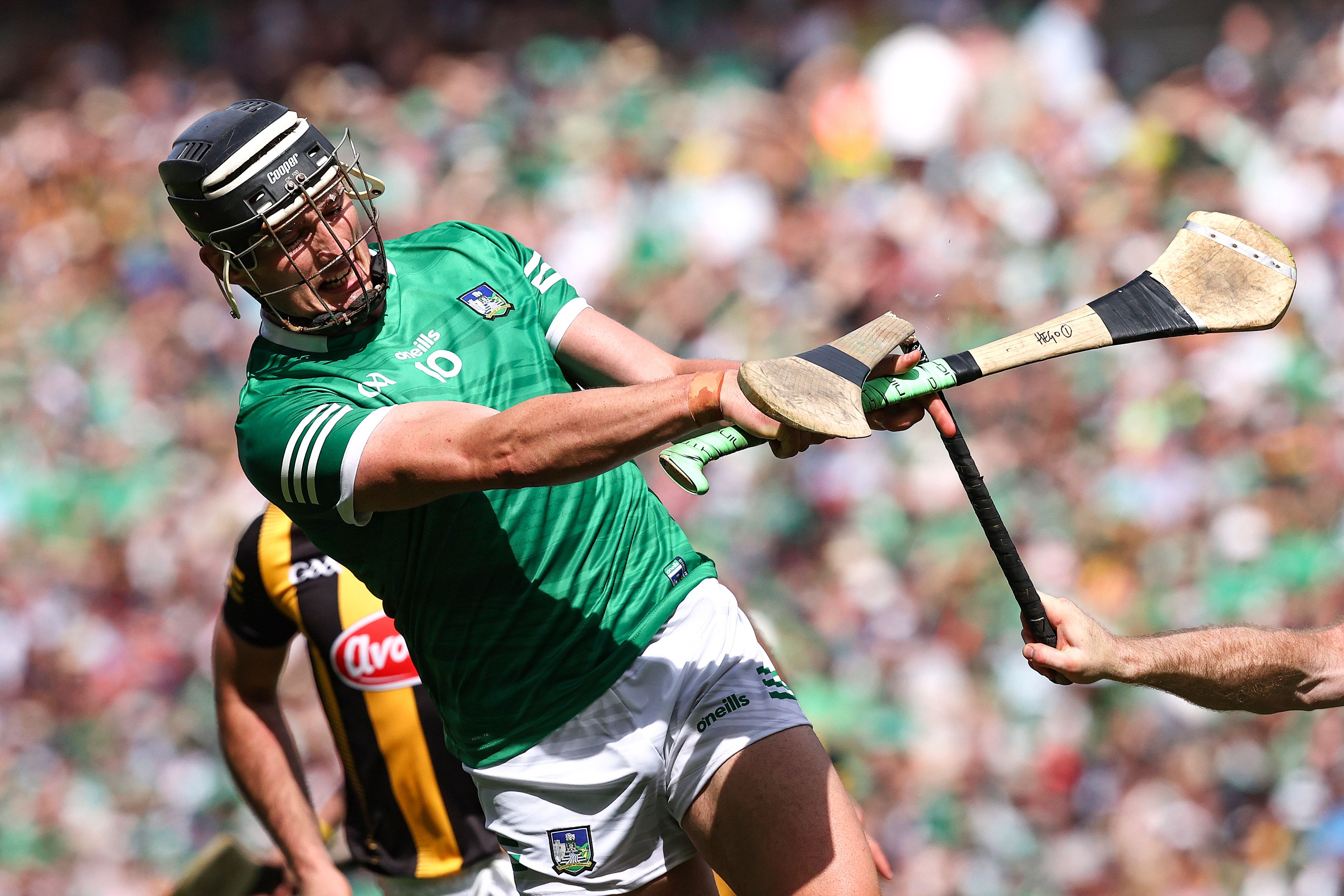 The hurl of Man of the Match Gearoid Hegarty survived this clash of the ash, but the one belonging to his Kilkenny opponent did not. INPHO/BRYAN KEANE

Cats make Limerick fight to the last for 3-in-row

Just like Brazil in soccer, the All Blacks in rugby and Kerry in Gaelic football, you need to beat Kilkenny if you really want to count your Celtic Cross as something special.

Limerick did this before a packed and sun-drenched Croke Park on Sunday after a titanic struggle between two brilliant side, and at the end of it all, the Shannonsiders became three-in-a-row winners in the best way possible -- by beating Brian Cody’s fired-up charges.

What a passion play we witnessed! John Kiely’s team got the perfect tonic at the start with Gearoid Hegarty’s green-flag rocket. It would have shook a lesser team, particularly as Limerick were landing missiles over the black spot from way off the normal radar.

Six points down at one time and blowing hard as they sought the oxygen of scores themselves, the men in the black and amber, ably led by the evergreen TJ Reid, clawed their way back into the game and when they got second-half goals from Billy Ryan and Mossy Keoghan and were level going down the final 10-minute strait, you wonderd would the magic of Cody rub off on them again?

In such a scenario, either a team buckles or gets back up off the canvas and goes again. And so it was with Limerick as their big names – and they were all over the pitch – got the points to ease them back five points ahead again as the minute hand rapidly approached the red zone of extra time.

True to form, three long-range Kilkenny points put the game back into the melting pot with everyone realizing that a two-point game can lead to a grandstand finish. Once again Limerick managed those last vital second deep in Kilkenny’s half, not allowing them down the field to do a Tipperary minor resurrection with a goal in the last seconds.

Quite rightly Gearóid Hegarty, who hit 1-5 from play but played a game of backs and forwards all through, was given the Man of the Match award but it could so easily have gone to Diarmaid Byrnes who hit five points from wing back or Kyle Hayes who scored four from play from the 40 and like Hegarty played all over the pitch. In a normal team, Tom Morrissey with four points and one that put Limerick back ahead again when Kilkenny drew level, would be a main contender as would skipper Declan Hannon, who  hopped up everything and whose physicality set down a market for the Kilkenny forwards who hoped to get on top in that aspect of the game.

Hannon  showed class off the field too when he insisted that injured two-time hurler of the year, Cian Lynch, lift the Liam MacCarthy cup alongside him at the presentation from GAA President Larry McCarthy.

And so Cody’s 17th final ends in his seventh defeat at this stage but a heroic failure if such a thing can ever be embraced.

He may have had his finest year because at least four of the starting 15 would not have got anywhere near his Kilkenny teams of the past. He had no choice but to mix and match and the fact that he could make such a patchwork side so competitive is arguably his finest triumph. He also showed great understanding of how to use his subs, with four coming on to score, including another former hurler of the year, Richie Hogan.

He also appeared to have produced a master stroke with his half time substitution which saw Walter Walsh arrive and make an immediate impact by initiating Ryan’s goal and then scoring a fine individualistic point himself.

With TJ Reid also drifting out to that right side of the Kilkenny attack, both big men became a way out for Eoin Murphy after many of his 17 puck outs were lost to the opposition in the first half.

It is a measure of the Limerick brains trust on the sideline that Kiely and coach Paul Kinnerk saw what Kilkenny had done and deployed Dan Morrissey, by inclination a full-back and man marker, to douse those flame. This he did to such an extent that it appeared as if Walsh had disappeared in front of 82,300 spectators for the rest of the game.

Limerick also played their own trump cards from the sideline and if Hawkeye ruled out a David Reidy point after his three from the semi-final, the arrival of Cathal O’Neill and Conor Boylan raised both spirits and white flags to help their team over the line.

Remember only for Kilkenny’s victory over Limerick in the 2019 All Ireland semi-final, there is a good chance that last Sunday’s win would have been a five-in-a-row for the Treaty men instead of a mere hat-trick. However, as was stated after the game, this isn’t the end of a story as the champions will be looking to make it four next year and who is to say that with Cian Lynch back and all still young in age and hurling terms, that they can’t make that happen?

Kiely has now led his county four wins out of five and savored this as the best of the lot so far. "It absolutely is,” he said. “Because look at the opposition we had to play. We played everybody in Munster. We had an incredible battle with Clare in the Munster final. Galway, a super side that we had huge battles with over the last five or six years as well. An incredible side and obviously then to meet Kilkenny in the final.

"The hallmark of their teams is always their hard work, they are tremendously skilful as well. They have it all in abundance. It was a proper battle. Some tremendous scores got by both sides. Just hugely relieved and delighted with what our lads did. Very proud,” Kiely added.