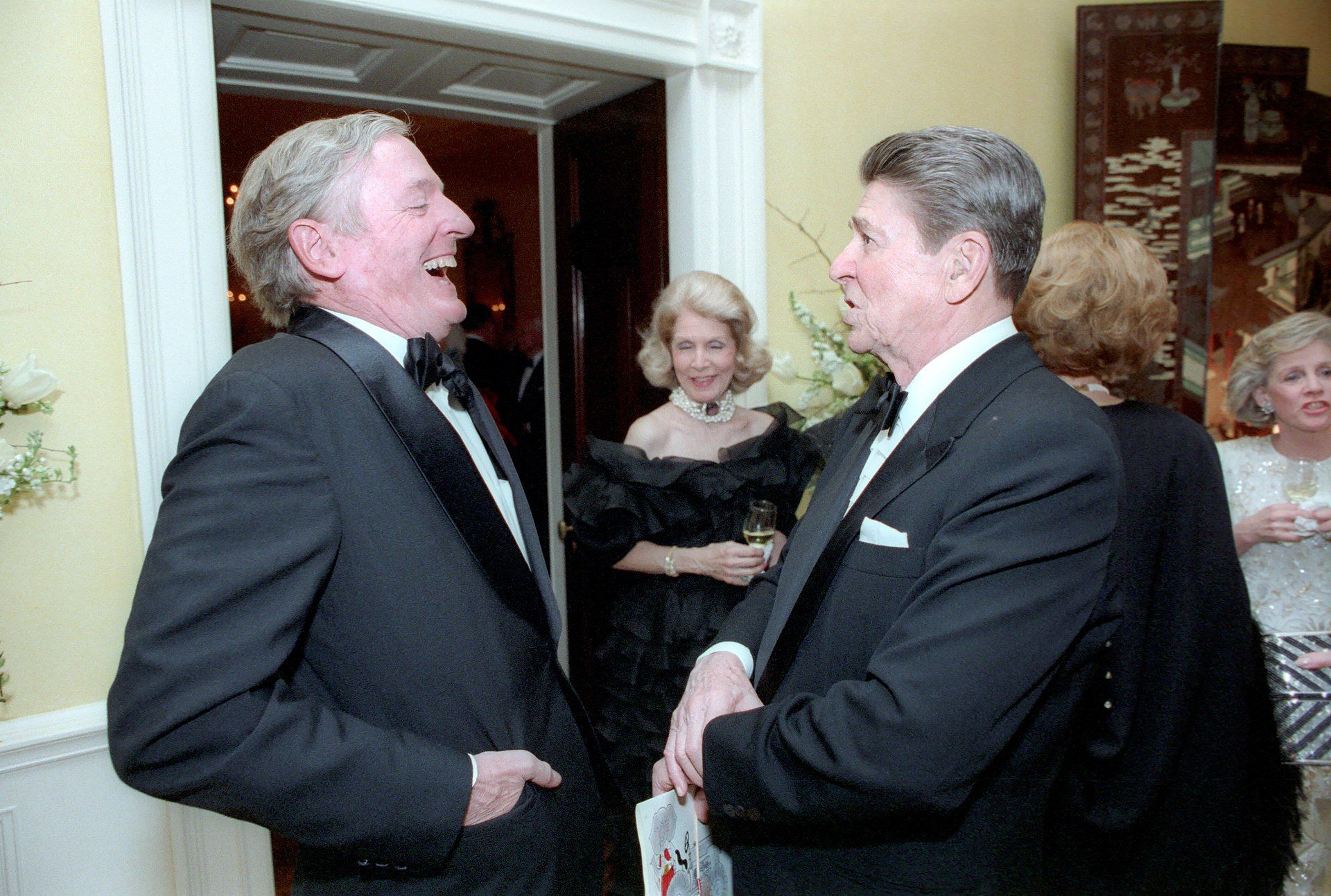 William F. Buckley Jr. sharing a joke with his friend President Ronald Reagan at a White House party in 1986.

The founder of Conservativism’s most important journal, the National Review, William Buckley made intellectual conservatism respectable for the first time in a generation, uniting the warring tribes of the American right and gave encouragement to an entire generation of conservatives.

On his television show “Firing Line” (1966-99), he became the most feared antagonist of American liberalism. Kind and generous in private, Buckley could be sarcastic and merciless on the air, skewering liberal beliefs and arguments with his brilliantly analytical mind. A man of culture, a gifted writer and brilliant debater, Buckley was also a sincere Catholic who defied many of the stereotypes of Irish-American Catholics.

Buckley had a unique upbringing which shaped his worldview. Born in Manhattan on Nov. 24, 1925, he was the sixth child of Will Buckley, a Texas Irishman who made in Mexican oil during the military dictatorship of Victoriano Huerta but then lost everything when he  was expelled by leftist general Alvaro Obregon. Subsequently Buckley Sr. made his fortune back in Venezuela. Buckley’s father rescued priests during the Mexican revolution and brought up his children to think of themselves as counter-revolutionaries.  Moving with his father to France, Buckley began his formal schooling in Paris, where he attended first grade. By age 7, he received his first formal lessons in English at a day school in London; his first and second languages were Spanish and French.

Buckley Sr. resembled his contemporary Joseph Kennedy in that he was a self-made Irish multi-millionaire, anti-communist and isolationist, who had a fierce determination that his children must succeed in competition with the Protestant elite. Buckley’s father, however, was an ugly bigot who sent his children (not including Bill) to burn a cross, the symbol of the Ku Klux Klan, on the lawn of a Jewish hotel. Like Kennedy, he was also an Anglophobe. William rejected his father's anti-semitism, but was also ambivalent  about the English, even if he spoke with a  slight English accent, acquired at the English Catholic public school he attended from 1938 to 1939. He had many English friends, especially the historian Alistair Horne, and was deeply influenced by his father's friend Albert Jay Nock, a defrocked Anglican clergyman who expressed contempt for the democracy and "economism" of the modern American world. For many years, Buckley, whose mother was from the American South, approved of racial segregation and continued to write pejoratively about Africans. Buckley was also openly homophobic, and when Aids first appeared, he suggested gay men should be tattooed on the buttocks. As a young man, when challenged on his beliefs, he replied: "I have God and my father, and that's all I need."

During World War II, Buckley served in the army and was part of the honor guard at Franklin Delano Roosevelt’s funeral. Buckley studied political science, economics and history at Yale, becoming  a member of the elite insiders' club, Skull and Bones and the star of the debating team, where he won a famous victory over Oxford’s team of future broadcast journalist Robin Day and future Labour politician Tony Benn. He also edited the Yale Daily News. After leaving Yale, he wrote a bruising attack in a book exposing the absence of religious faith at Yale, called God and Man at Yale (1951). The highly controversial book drew denunciations from the university,  making Buckley a young literary star.

He briefly served in the C.I.A’s Mexico City bureau before starting to edit The American Mercury magazine in 1951 and 1952, where he defended  Senator Joseph McCarthy, but left it because he perceived it to be Anti-Semitic.  In 1954, Buckley  co-authored a book, McCarthy and His Enemies which

Defended McCarthy’s blacklists and denunciations. Founding the National Review in 1955, Buckley employed many talented writers who were former leftists, uniting the authoritarian, often intolerant, strand of American conservatism with  libertarian, free-market conservatives under a banner of anti-communism. Many American conservatives claim that they drew their ideological beliefs from reading the National Review.

He ran a quixotic campaign for mayor of New York against John Lindsay in 1965. A reporter asked him, "conservatively speaking", how many votes he expected to get. "Conservatively speaking," he replied, "one". "What would you do if you were elected?" the reporter inquired. "Demand a recount." During a televised debate with Lindsay, Buckley declined to use his allotted rebuttal time and instead replied, "I am satisfied to sit back and contemplate my own former eloquence.”

Buckley grew tired of his publication and In 1966 he created the talk show “Firing Line,” which made him an instant celebrity and the intellectual guru of the conservative movement. His most famous TV moment came, however, in a face-off with author Gore Vidal in a series of moderated discussions at the RNC and DNC in 1968. When in one of them Vidal repeatedly claimed that his opponent’s views approached Fascism, Buckley exploded: "Now, listen, you queer. Stop calling me a crypto-Nazi, or I'll sock you in the goddam face and you’ll stay plastered.” (Their long-running feud and mutual distaste is recalled in the  2015 documentary “Best of Enemies.”)

He celebrated the 1980 election of his friend Ronald Reagan as president. The election restored his reputation and he triumphantly celebrated a vacation with the Reagans at Claudette Colbert's house in Barbados. George Will, whom he once hired as National Review's Washington correspondent, claimed that Buckley’s work had laid the groundwork for Reagan’s victory and that he had provided the Republican party with an "intellectually defensible modern conservatism."

In a New York Times  op-ed piece on March 18, 1986, Buckley caused a firestorm in writing about the AIDS epidemic. Calling it "a fact" that AIDS is "the special curse of the homosexual," Buckley said that infected people should only marry if they agreed to sterilization and that there should be mandatory universal testing. Most controversially, he advocated everyone who tested positive for AIDS should be tattooed on the upper forearm, to protect common-needle users, and on the buttocks, to prevent the victimization of other homosexuals. Buckley later tried to walk back some of the claims he made in the piece.

A bon vivant, Buckley increasingly retreated to estates in Connecticut and Switzerland, while enjoying attacking Manhattan liberals at dinner parties of New York’s elite. An avid sailor, Buckley often crossed the Atlantic and the Pacific in large yachts loaded with friends, vintage wine, hundreds of hours of taped Mozart and Motown, word processors and a piano for him to enjoy Bach. Besides being an accomplished pianist, Buckley wrote a series of popular novels involving CIA agent Blackford Oakes. In total,  he wrote more than 40 books and 5,600 of biweekly newspaper columns, entitled “On the Right.”

He died on Feb. 27, 2008. President George W. Bush eulogized Buckley stating, “He influenced a lot of people, including me. He captured the imagination of a lot of people." House Speaker Newt Gingrich added, "Bill Buckley became the indispensable intellectual advocate from whose energy, intelligence, wit, and enthusiasm the best of modern conservatism drew its inspiration and encouragement.”