Home Arts & Leisure BOOKS: When will unionists realise their fellow-British couldn't give a toss for them? 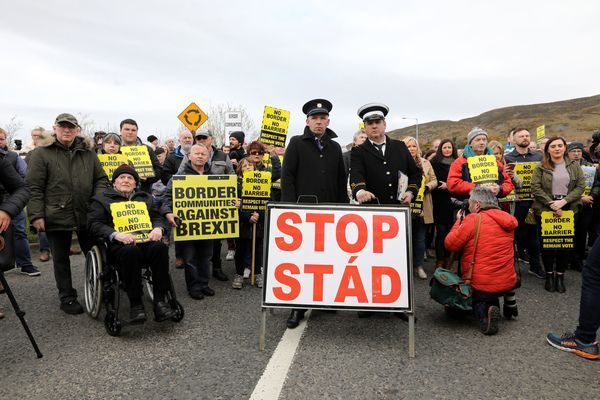 BREXIT HAS TUBROCHARGED UNITING IRELAND DEBATE: Communities protest Brexit on the border back in 2019 Rollingnews.ie

How do you solve a problem called Identity? It’s a state of mind. It isn’t rational. It isn’t amenable to argument. It isn’t based on either prosperity or penury (it’s not the economy, stupid). It simply is. And this is the overarching, seemingly intransigent, factor that bedevils all those who present a logical case for the island’s political unity.

Over time, starting with the plantations of course, and then, most crucially, since the failure of the United Irishmen uprising to forge lasting unity between Presbyterians and Catholics, the sectarian division has become entrenched. A division, incidentally, both endorsed and manipulated by the British state.

Yet, and here is the rub, the modern British state would now be only too delighted to jettison the Orange statelet it founded a century ago. The fact that it cannot do so is entirely down to it having fomented sectarianism and thereby created a large community of people who identify as British, and for whom successive British governments, and the overwhelming majority of the British people, could not give a toss.

Although the 883,768 people in the Six Counties who identify as Protestant (according to the 2011 census) know this, they stubbornly continue to see themselves as British. This situation, to quote Winston Churchill – that arch imperialist who helped to negotiate the Anglo-Irish treaty which divided Ireland – is truly "a riddle, wrapped in a mystery, inside an enigma.”

How then can Irish nationalists convince those 883,768 people that they will not be rejected in a united Ireland; that they will be free to follow their religious persuasion, and, if they so wish, to go on identifying with a culture that, in so many ways, is inimical to that of their fellow Irelanders?

It is a big question – in fact the big question – which haunts Frank Connolly’s book because his major assumption is that the reunification of Ireland is inevitable. He does not provide a definitive answer, indeed any answer, to the unionist population’s identity crisis, but the value of his survey lies in its deployment of a range of arguments by people who, in a variety of ways, point to the conditions in which identity might fracture. Or, in some respects, be already fracturing.

For Connolly, Brexit is the key component to effect change, a conviction which makes this the most optimistic of books. He is surely correct in arguing that the debate on Irish unity has intensified since Brexit. Reunification is on the news agenda as never before.

It is “no longer a question of whether, but when and how”, says Connolly. And, in support of his argument, he has linked together a score or so of interviews with a range of people of a like mind.

"Zoom out from the noise of the latest [Brexit] disagreements ... and the truth is that unionist disruption will one day have to bow to the inevitable: Irish unity. It’s time for Northern Ireland’s Protestants ... to talk about it," @JaneFerguson5 writes: https://t.co/33vik3b6Hl

Critics may well deride the exercise as little more than an idealistic echo chamber where a vocal minority foolishly convince themselves they are speaking for the silent majority, which has no time for their beliefs. But that view misses the point by a mile.

What Connolly and his chosen commentators understand is that Brexit – particularly its special Irish component, the Protocol – has rebounded on the DUP’s anti-EU stance by putting reunification centre stage.

Sinn Féin’s president Mary Lou McDonald may be exaggerating somewhat by saying that that unity “is being talked about in every town and city in Ireland as a realistic, achievable and necessary future”. But even if she is not correct in the literal sense, she is bang on the money in metaphorical terms because, again as she says, Brexit has “changed the conversation.”

That conversation shines through Connolly’s book, especially in interviews with progressive unionists, such as the former editor of Enniskillen’s Impartial Reporter. Denzil McDaniel recognises younger unionists are open to a united Ireland, as are unionists “who are very unsettled by Brexit.”

This evening at Áras an Uachtaráin, President and Sabina Higgins celebrated the many different groups, organisations and individuals who contribute so much to our rich music and arts scene across the country and particularly through the medium of Irish traditional music. pic.twitter.com/CTfGxu4ngG

His view was echoed, to an extent, by another unionist interviewee, Ian Marshall, who spent two years in the Seanad and campaigned against Brexit. In his interesting contribution, Connolly quotes him as saying: “When I’m talking to loyalists in east Belfast, they’re focusing on all the same things that republicans want: let’s improve the education of kids, let’s open up opportunities, let’s drive tourism and foreign direct investment, let’s encourage business.”

Of those factors, surely education is the most significant of all, and it is lack of education within loyalist communities that holds back young people’s wider social and cultural development. They are the ones who persistently treat Britishness not as a badge but as some sort of defensive (and occasionally, offensive) weapon. Identity for them is a manifestation of their siege mentality.

With that in mind, McDonald recognises that it is “civic society outside of the political bubble [that] has to be fully engaged”. If identity as a negative factor is not only to be challenged but also to be transformed then tackling the poor state of education in working class loyalist areas is of paramount importance.

When people talk of education, however, they think naturally enough about what schools youngsters attend. But there is a wider kind of education, the kind that takes places in public discourse, on radio and television, on social media, in which it is possible for the unyielding and the uninterested to open their minds to a new vision.

Sometimes, it has nothing to do with debate at all. People in the Six Counties have long been dismantling the border in ways that make a nonsense of a divided Ireland. As the poet Paula Meehan points out, artists have always viewed “the arts as a borderless zone”. The word “joint” has become a commonplace since the peace process – joint tourism promotion, joint business activities, joint farming enterprises.

These many acts of casual cross-border collaboration help to break down borders of the minds. More formally, we learn that farmers in the north exported an extra €1 billion of goods to the 26 Counties in the first 10 months of 2021. Trade is good. A unified economy would be better still.

In what amounts to the book’s theme, the actor Stephen Rea tells Connolly: “A partitioned island makes no sense. The waste of energy in maintaining it could be used for other things”. But it’s what he says next that hits the spot: “The British government is always going to stand by the unionists. They hate them but they’re going to use them to get one over on Sinn Féin.”

When will unionists boasting their “British identity” realise that harsh and realistic truth?

US readers can order United Nation direct from the publishers in Ireland at this link.