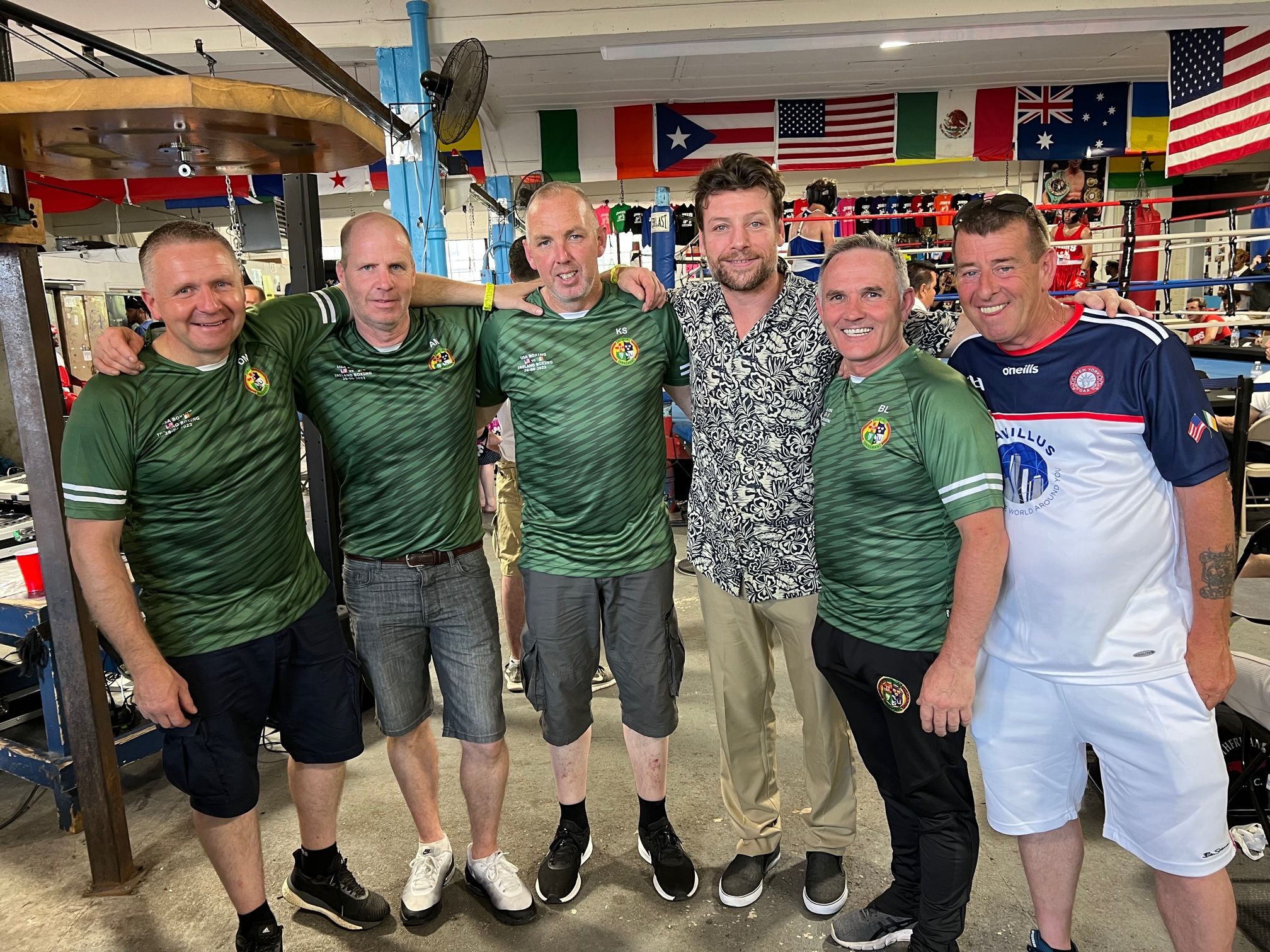 Eighteen-year-old Donagh Keary, All Irish champion at 125-pounds, and Leon McMahon, Antrim titlist at the same weight, were the only Irish winners in the visiting Rathfriland ABC team’s seven bouts against a US Metro Select side at John’s Gym in the Bronx last Sunday.

Keary put on a clinic against Juan Flores in their three-rounder. He danced around the ring skillfully, landing jabs, hooks and quick combinations while taking few punches in return.

Flores attempted a rally in the second stanza with a body attack that he could not sustain. Keary was back in control by the end of the round and cruised to an easy win.

He was followed in the ring at the well-attended show by Leon McMahon, who’s 17. An eye-popping talent, McMahon painted another Irish masterpiece against Nicholas Alexander with his sharp and quick fists.

He was outboxing his man so easily that the Alexander succumbed to frustration in the third and final round when he was disqualified for unsportsmanlike conduct.

The victory upped McMahon’s ledger to 20-4 after four years as a boxer.

A losing finalist in the All-Irish championships, the gifted McMahon told the Echo that he was shooting for an Irish title this year and plans on turning pro when he turns 18.

The other Irish fighters all came up short against their USA Metro opponents.

In the opening bout, Yaqub Kahlifa, who’s 15 and an Irish finalist at 119 pounds, found the shorter, compact Angel Ruiz a hard nut to crack.  They engaged in an early firefight before Kahlifa tried to control the relentless Ruiz with a steady jab. Ruiz was awarded a split points decision after three stanzas.

At 145-pounds, Rathfriland’s Liam Grant, who’s 16, appeared to have done enough against Ari Robinson, only for the latter to get the nod.

A group shot of the young Irish boxers, their trainers and John Duddy. [Photo by Jay Mwamba]

The Irish southpaw used his range and height while attempting to catch his shorter opponent coming in. Robinson, meanwhile, was trying to get inside with limited success.

It degenerated into a slugfest in the last minute of the final round, and when the judges’ cards were tallied, Robinson was awarded a split points decision.

Matthew McManus, a 132-pounder, also came up short via split points decision against the host gym’s Emmanuel Agramonte. The New Yorker fought like fury, pressing McManus from the first bell.

McManus fought back, scoring with some good jabs. But in the end, the judges gave it to Agramonte.

Bobby Lavery, Rathfriland ABC co-trainer, was delighted with the event and the exposure that his young fighters – not all of whom fought -- got.

“I would like to firstly thank Barney Moore, Donal Sullivan, and Navillus Construction New York for their kind sponsorship which has allowed us to bring 12 kids from different backgrounds in Ireland to the fantastic John’s Boxing Gym in the Bronx,” he said. “Also to USA Boxing Metro and Sonya Lamonakis who set up a super show and her great team of officials.”

Lavery also had props for Kaleim O’Hare, Hilltown Co. Down, who set the ball rolling for the show and got him in contact with Jimmy of John’s Boxing Gym; and for Gleason’s Gym proprietor Bruce Silverglade and Martin of the Trinity Boxing Gym.

Three Irish prospects -- Las Vegas-based Top Rank's brightest young talents – are lined up to fight in Belfast on Aug. 6, on the Michael Conlan-Miguel Marriaga undercard at The SSE Arena.

Welterweight Paddy “Real Deal” Donovan, featherweight Kurt Walker and junior middleweight Kieran Molloy will appear in separate fights on the card to be streamed live in the United States on ESPN+

Donovan will be in his first scheduled eight-rounder, while Walker and Molloy will see action in six-rounders. Their respective opponents will be announced later.

Promoted by Top Rank and Conlan Boxing, tickets are on sale now and can be purchased at Ticketmaster.co.uk.

The stylish southpaw last fought on the Josh Taylor-Jack Catterall undercard last February, knocking out Miroslav Serban in six rounds. He’s been out of action since, rehabbing a hand injury.

Walker [2-0, 1 KO], from Lisburn, Northern Ireland, turned pro with a first-round knockout on the Taylor-Catterall card, a highly anticipated debut following an amateur run that included a gold medal at the 2019 European Games.

He returned April 23 on the Tyson Fury-Dillian Whyte undercard at Wembley Stadium, where he won a four-round decision over Stefan Nicolae.

Molloy (1-0, 1 KO), a native of Galway, Ireland, also turned pro on the Taylor-Catterall bill and notched a second-round stoppage over Damian Esquisabel.

He was scheduled to fight June 18 on the Artur Beterbiev-Joe Smith Jr. undercard at Madison Square Garden, but his opponent tested positive for COVID-19 during fight week.