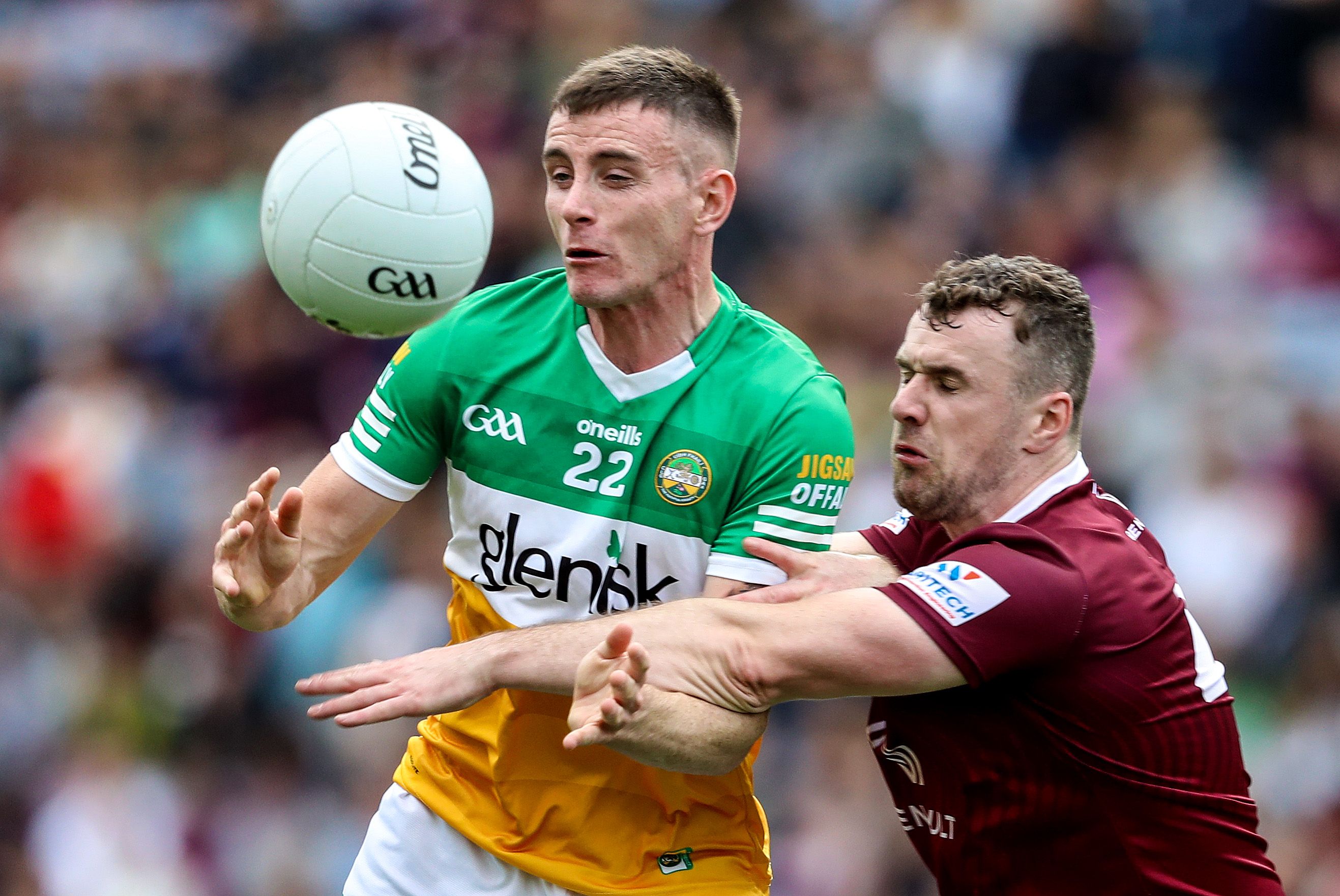 It’s a truism that goals win games as Sligo netted five against Donegal in this senior football clash. Indeed the Yeats County nearly had a few more but for the fact that the Donegal keeper brilliantly saved a penalty and the buzzer just sounded as the trigger was being pulled for another goal. The goals were well executed, but at least one was a tad fortuitous.

Meanwhile Sligo started smartly as Connell Malone scored on their first possession. However for the next quarter Donegal took over, monopolizing possession as Finn McElroy, Kyles Higgins, Conor Hynes, Rory Canavan and company were impressive, and Sligo looked to be in trouble. Soon they had three points on the board courtesy of Ronan Canavan(2) and Lanty Molloy. Then on a counter attack Danny Corridan set up the busy Dylan Rooney for a minor score, before Sligo struck two majors in a two-minute spell around midway in the period. Connell Malone netted the first, and Dylan Rooney added the second.

Donegal battled back to level up within the next five minutes. Ronan Canavan pointed a free and Sam McCabe raced in to punch a rebound to the net. McCabe also got the levelling point as he capitalized on a good delivery from Mark Keaney. Donegal appeared to be back on their game plan, but that soon unraveled as Sligo struck again. Harry O’Connor pointed and Danny Corridan blasted a shot to the net. Once again Donegal rallied and resorted to their strong-running as Ronan Canavan and Conor Hynes combined to add three points to reduce the deficit to the minimum with just two minutes left in the half.

Sligo, though, stymied Donegal’s recovery with a fine long range point from Tony Donnelly and a trade mark goal from Jonathon Glynn, leaving the score at 4-4 to 1-8 in Sligo’s favor at the break. On resumption Donegal picked up momentum with a brace from Conor Hynes, and Sligo nearly poached another goal, but the pass was overcooked.

Big Johnny Glynn was causing havoc for Donegal’s defense as he set up Connell Malone for a handy score. Brian Coughlan came off the bench to land a fine point. Midway it looked as if another goal was on the cards for Sligo as they were awarded a penalty. They opted to take the penalty and forgo the point that was scored after the infraction, but the spot kick was brilliantly saved.

However the ball was soon in the net after  Coughlan delivered a great diagonal ball to the inrushing Donnelly to knock it in, giving Sligo an eight points lead with just under a quarter to play. Donegal certainly tried hard to the end as some explosive runs by powerful midfielder Higgins set up chances, but stern defending by Kelly, Diskin, Rooney and company limited Donegal’s Hynes, McNeilis and Canavan to just three minors when majors were needed if Sligo were to be ousted from pole position. Also great to see that current players are taking up refereeing, though a thick skin is essential, as Barnabas’s Shane Hogan coolly and capably kept law and order in this senior encounter.

St. Barnabas, the all-American-born squad and the top team in New York for the last few years were supposed to meet their match against a Brooklyn outfit very much in the ascendency according to pre-game analyses. The Brooklyn lads are anchored with a formidable phalanx of established players among them, Mickey Cunningham, Alan Campbell, David Culhane, Adam George, Niall Madine and Shane Gillespie. Plus Barnabas’s cause didn’t appear to be helped by the absence of two formidable forwards, namely the Reilly cousins, Sean and Jack, and Shane Hogan still unavailable.  Well as the score line indicates a young, fit and skillful squad outplayed, outran and outscored their more seasoned opponents. When it comes to Barnabas, the whole is always more than the sum of the parts, and of course the starting squad is well augmented by a staunch bench.

Then there’s the contribution of keeper Cole, who, besides having the longest kick-out often landing on the opposing fifty yard line, is also a superb shot stopper, and he did well to deny Brooklyn’s most potent forward David Culhane on a few critical occasions.

This was a tough but fair physical battle as the referee let things flow, there were no handy frees for falls or feigns.  A decent wallop earned a free.

Meanwhile Brooklyn got the perfect start as Aaron McGoldrick goaled after three minutes after Niall Madine set him up. In fairness to Madine, he may not have been playing with a full tank as he was involved in a heavy battle with Kerry against Mayo in the prior game.  However, Barnabas replied in kind immediately Timmy Fitzmaurice netted after Mikey Brosnan delivered the pass.

Both sides swapped points, Mikey Brosnan for Barnabas and Kevin Connolly for Brooklyn. The Bronx Boys jumped ahead after Timmy Fitzmaurice curled over an exquisite point, but the lead looked set to be short-lived as David Culhane motored in like a six liter mustang, but Cole brilliantly repelled his blistering shot.

Around midway the Brosnan brothers, Mikey from a free and Shane with a fine long range effort, edged their team further ahead. At the other end good support play from Shane Gillespie and Kevin Connolly set up Brian O’Hanlon for a point. Barnabas were monopolizing the play but wasted  scoring chances before Mikey Brosnan pointed for a free after a powerful run by Brendan Martin, a nephew of “Spike”, was illegally impeded. Culhane landed a fine effort from distance, but Barnabas finished the period strongly as Fitzmaurice punched goal number two to the net after newcomer Eoghan O’Donnell did the preparatory work. Barnabas went in leading by 2-5 to 1-3 at the half.

Upon resumption Barnabas continued to advance the scoreboard as Tiernan Mathers(2), Gearoid Kennedy and Mikey Brosie tapped over points. Ten minutes elapsed before Aaron McGoldrick scored for Brooklyn, but Barnabas had a let off as a rasper hit the outside of the upright after Culhane had dodged and weaved his way through the defense. Barnabas might have been further ahead, but a penchant for attempting goals kept the scoreboard  temporarily static, when taking points would have been an easier and safer option. Once the last quarter arrived, the outcome was never in doubt as sweeper Hogan and last line defenders Boyle and Mathers made it hard to get a look at the goals, never mind get a goal.

Meanwhile Madine, CJ McLoughlin and Brian O’Hanlon added late points, plus the latter kept Cole on his toes with a fine effort. Eoghan O’Donnell certainly had a great debut for the Bronx Boys as he finished with a goal. I’m sure there’ll be closer battles between these New York named teams.

Though Hoboken’s Niall Cohen got the opening score in this match, Westmeath were in pulverizing form in the early exchanges. Luke Prendergast, Ger McPartland, David Mangan belted over points, and the latter blasted in a goal to be six points up after six minutes. Niall Cohen got a goal after a good pass from Cathal Egan. Then Johnny Glynn entered the game with immediate impact, he got a goal. Westmeath were still in pole position as they would lead by 1-9, courtesy of further points from McPartland, Prendergast, Simon Hickey and Gavan Curley to 2-4 at the break.

The second half belonged to Hoboken as they comfortably outplayed and outscored the Lakesiders. Coen started with a point before a Glynn catch set up Enda Fahey for a goal. Points began to rain over from Harry O’Connor, Glynn and Fahey before goal number four arrived.

Westmeath rallied, a goal from Prendergast, and points from McPartland and Mangan put a better gloss on the scoreboard. Hoboken finished with a flurry as Glynn, Coen, Walsh, Morrissey and Paul Killeen enhanced their stats