Home Offaly: a bridge too far for New York 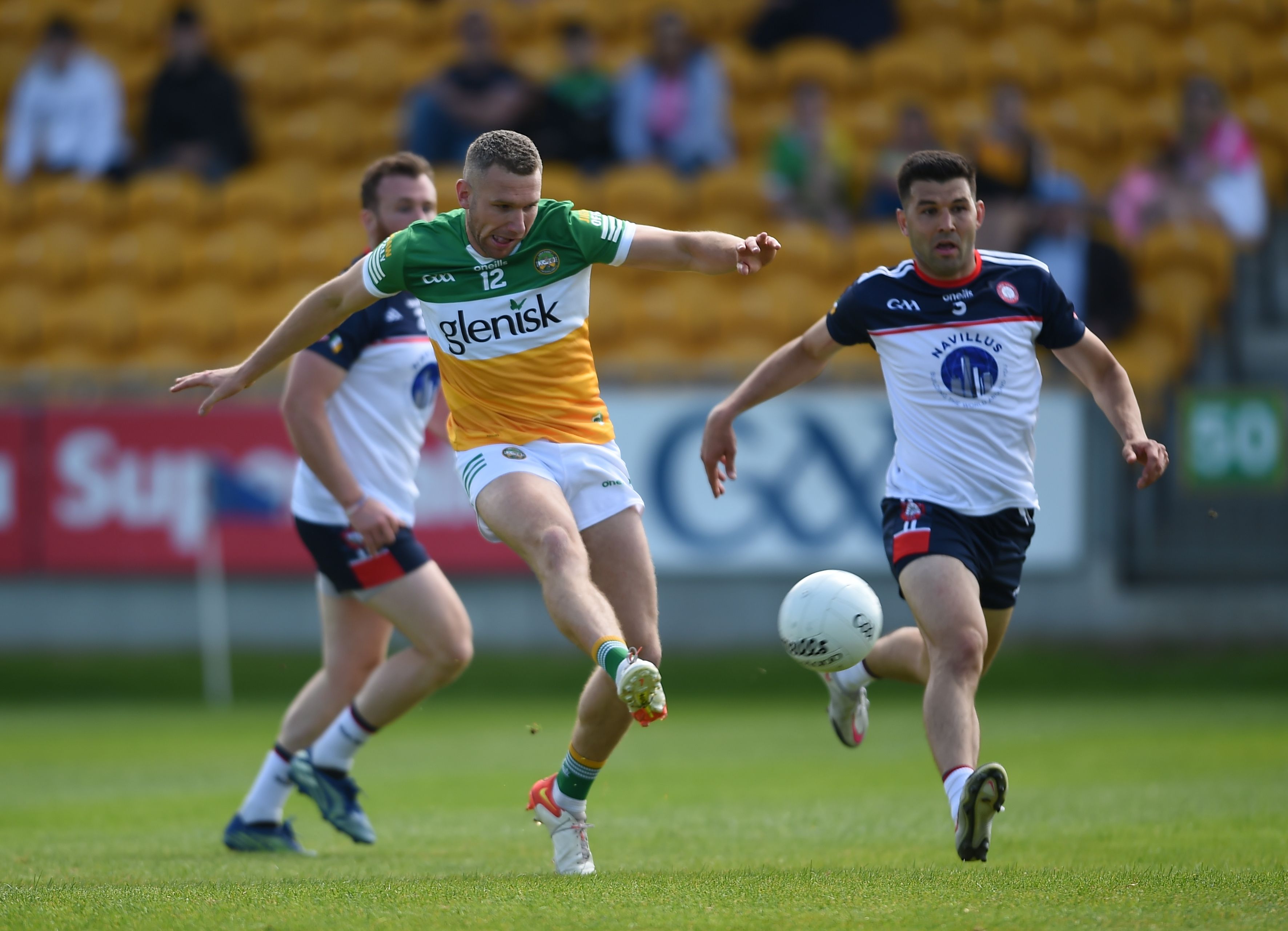 Offaly: a bridge too far for New York

Offaly cruised to the semifinal of the Tailteann Cup with a relatively easy victory over New York at Connor Park, Tullamore on Saturday afternoon. The Big Apple GAA folks were quite happy to see New York get a second game by competing in this inaugural competition. However even the most positive pundits would have to agree that this match up was a bridge too far on a number of accounts, but then of course you have to be wary of the admonition of US President Harry Truman, namely, if you can’t stand the heat, get out of the kitchen. Perhaps the ambience of the porch might have been more accommodating to New York footballers.

The reality was that New York was given a baptism by fire in this new competition. They entered at the quarter final stage, pitted against a team that had already won two games, plus Offaly were in division two of the National League. Indeed some would claim that they could be strong contenders to win the Tailteann Cup. Then compounding New York’s situation was the fact that they were forced to travel without a half dozen of the squad, with the omission of Mark Ellis and Niall Madine, being the most impactful. Granted accommodation in the competition was made regarding travel logistics, but the reality was that New York would have been much more comfortable playing against some of the other teams in the preliminary round. New York v London would have been an interesting match.

Meanwhile exchanges appeared balanced early on, though Jack Bryant opened the scoring, it was quickly answered as Mikey Brosnan and Adrian Varley combined well to set up Jack Reilly for a score. Indeed Reilly would go on to be New York’s most productive player. However, soon the more fleeted-footed Offaly boys began to confidently spray the ball into open spaces and thus splaying the New York defense. Frees from fouls duly ensued and Niall McNamee was on hand to pop them over.  New York was still very much in contention, and looked to be heading for a score, but a two consecutive hop indiscretion negated the promising build-up. The simple mistake was costly as the ball was then quickly sent to the other end as Keith O’Neill timed his run perfectly to fist a long delivery from Rory Egan to the net after ten minutes. Offaly were now in full attack mode and they would hit the woodwork twice, before McNamee added two more points.

Then, on 20 minutes Adrian Varley struck a fine point for his team, but Johnny Moloney responded with an equally spectacular score after soloing over half the field.  New York was becoming more involved in the last quarter as Jack Reilly pointed after good support play from Tiernan Mathers, Mikey Brosnan and Varley. Jack Reilly then landed his third point to culminate a good movement begun by Dan Sullivan. The mini scoring spree was interrupted as keeper Paddy Dunican landed a long-range effort from the ground. (Incidentally Saturday was alleged to be a busy day for the keeper, he left his sister’s wedding to line out for his team.)

When play switched to the other end, Johnny Glynn set up another chance for Jack Reilly. Things still seemed to be going Offaly’s way as a long ball from Niall Darby appeared destined for the goalmouth, but with an assist from the wind, it went over the crossbar. As the period wore down, Offaly displayed two vignettes of superb skill, namely two points from very acute angles, one by Rory McNamee and the other by Niall Darby respectively. Then just before the short whistle Anton Sullivan goaled, with Jack Bryant suppling the last pass to leave the score line 2-10 to 0-5 at the break.

Though Offaly was against the breeze in the second half little changed in the pattern of play. The home side landed four points in the first five minutes as Sullivan, O’Neill, Rory McNamee and Bryant all added minors. There could also have been a major, but keeper Cunningham saved superbly from Bryant. Now that victory was a sine qua non, manager John Maughan sportingly began to run his bench. However given that Maughan’s bench consisted of some of the All-Ireland under 20 squad, there would be little reprieve or respite for New York.

In fairness to New York, though the scoreboard looked dismal, they kept their composure and discipline to rally as hard as they were allowed. They put the next three points on the board, a “45” from Sean Reilly, while Connell Ahearne impressed after coming on with a fine long range effort, and Varley pointed from a mark.

A point from Niall McNamee and a goal from sub Cathal Flynn left no doubt that Offaly were still very much in charge. As the game petered out to its inevitable conclusion Offaly became quite sloppy, dropping several balls short plus hitting some bad wides. New York did land three late scores courtesy of Varley(2) and Aherne, while Jack McEvoy fisted over to complete a very impressive tally for his team, and secure a place in the semi-final in four weeks.

Overall the Faithful County had way too much firepower and pace for the overworked Yanks, whose defense was too often readily and regularly exposed by a highly functioning frontal sextet. Though up front, New York did well to get 11 scores from rather limited possession. It was also noteworthy that New York started six American-born players, plus there were another few on the panel.

In previewing the game the main media outlets stated that New York last played in Ireland against Roscommon in 2001, and that they had never played Offaly before. For the record the first statement is true, but the second is false. Records show that New York and Offaly, the defeated 1969 All-Ireland finalists, played in Tullamore in October of that year.   New York scored 0-11, to Offaly’s 1-9. New York led most of the way, but a very strong Offaly finish saw them edge through with a late winner from Nicholas Clavin, who was the man of the match. Sean Cooney was the only goal-scorer, while New York’s scorers were Dessie Ryan(0-3), Mick Gannon (0-3), Pat Diamond(0-2), Paddy Cummins(0-1), Joe O’Driscoll(0-1) and Mickey Niblock(0-1). Martin Furlong was Offaly’s goalkeeper, while among some of his notable team mates were Kevin Kilmurray, Larry Coughlan, Willie Bryant and Eugene Mulligan.

This senior hurling clash, between what were once regarded as close rivals, was very one-sided from the throw-in. Within the first two minutes Tipp had points from Henry Keyes and Declan McGrath as well as a goal-bound effort rebound off the upright.   Tipp seemed to be in command across the field as their tenacious defenders kept a tight rein of Hoboken’s front line as their efforts were quickly rebuffed, and thus setting the stage for Peters, McGrath, Butler and company to land points at the other end.

Tipp had six points on the board before Hoboken raised their first flag with a lovely point Paul Gordon and Declan Fahey quickly followed with another. Tommy Kavanagh landed a fine long range effort before David Pond, despite being well surrounded, released the ball to Henry Keyes, for him to lash it to the net. Tipp continued to dominate as further goals came from Joey Grace, David Pond and Henry Keyes and points were added by Mark Ellis and Declan McGrath.

Tipp coasted to the intermission on a score-line of 4-11 to 0-8, with Paul Gordon, Dara Walsh, Conor Sheedy and Declan Fahey chief flag-raisers for the Jersey Boys. Upon resumption Hoboken enjoyed a brief productive spell, to put 1-2- on the board, the goal came from Harry O’Connor and the points from Dara Walsh and Paul Gordon.

Then it was back to the Tipp scoring script as they would add another 2-9 to their impressive tally, with Liam Donovan and Daragh Peters the goal strikers. Granted the game was rather one-sided, but I’m sure Hoboken will be a more formidable force as the season progresses. Also very nice to see a few American-born players are quite adept at hurling.