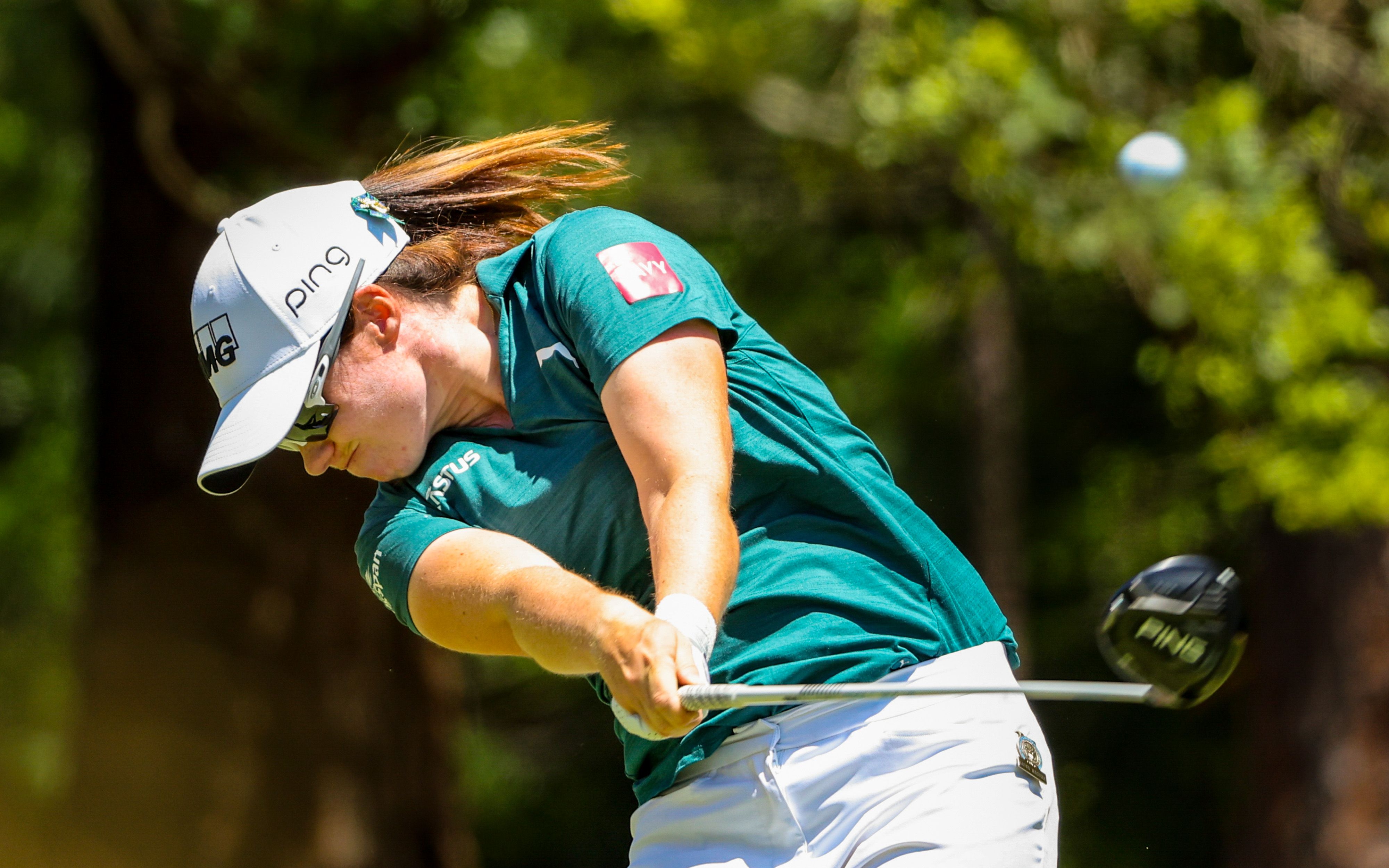 Leona Maguire in action on Saturday at the U.S. Women's Open at Pine Needles in Southern Pines, N.C. Photo by Jeff Haynes.

Ray Milland had his lost weekend. Leona Maguire has recently had several lost weekends, having nothing to do with imbibing of alcoholic beverages. She entered last week’s U.S. Women’s Open at Pine Needles in Southern Pines, N.C. off three missed cuts, hardly a boost to the ego. Yet, she produced her best finish – a tie for eighth place – since her maiden victory in February.

Maguire was at her best on Saturday, when she reeled off four birdies over a stretch of five holes midway through the round. Catching Lee on Sunday was a
low-percentage task and she put that out of the realm of possibility with bogey at three of the first seven holes.

Stephanie Meadow missed the cut by a stroke after posting rounds of 72 and 74.

The ladies move on to the ShopRite LPGA Classic at the Seaview Resort just outside of Atlantic City, N.J. this week.

A few weeks ago, Rory McIlroy commented on the extremes of weather to which he and his colleagues had been subjected this year. Wind, rain, cold; you name it, they played through it. He was looking forward to a spell of weather where he could just go out and play golf without having to factor in the elements.

So, what did he get on Saturday at Jack Nicklaus’ Memorial Tournament in Dublin, Ohio?

“It’s such a benign day,” McIlroy said. “It’s a perfect day to play golf. Like not much breeze. It was ideal.”

Did McIlroy capitalize on this good fortune? Nah, he played himself out of the tournament.

Opening rounds of 70 and 69 were only one stroke higher than those posted by eventual champion Billy Horschel.

While Horschel shot 65 on Saturday, McIlroy countered with 73. There really wasn’t anything awful about his play, at least through the first 16 holes. He was a stroke under par after birdies at 11 and 13. But bogeys at 16 and 17 changed the complexion of things.

And forget about a Sunday rally. That flew out the window with a double bogey-6 at the second hole. When he made the turn, he was coming off another double bogey, his tee shot having landed in water.

Three birdies over a four-hole stretch coming in got him back to 2-over for the round. The 74 he signed to dropped him into a share of 18th place at 2-under-par, 11 strokes behind Horschel.

But there would be no excuses about the weather or the course setup.

“It’s tough but it’s fair,” McIlroy said of Muirfield. “You see someone like Billy go out and you’re still able to [post a score] if you hit the shots and hole the putts.”

Shane Lowry had a somewhat similar experience. Opening rounds of 69 and 72 kept his hopes alive, although they slipped away with weekend rounds of 72 and 76. He took a share of 32nd place, 14 strokes behind Horschel.

Seamus Power missed the cut by two strokes after rounds of 72 and 76. A double bogey-5 at the par-3 16th hole on Thursday, brought on when his tee shot became waterborne, ultimately proved fatal.

Both McIlroy and Lowry will play this week’s Canadian Open in Toronto, an event that McIlroy won last year.

Darren Clarke took a share of 18th place in the Principal Charity Classic at the Wakonda Club in Des Moines. Rounds of 71, 67 and 69 left him nine strokes under par for the tournament and nine off the low scores posted by Jerry Kelly and Kirk Triplett (Kelly won the playoff on the first extra hole).

Graeme McDowell earned a share of 15th place in this circuit’s International Series event at Slaley Hall in England. Rounds of 70, 69, 70 and 72 left him three strokes under par for 72 holes and nine off the low score posted by Scott Vincent.

John-Ross Galbraith had the co-low aggregate score for the final 36 holes of the Ignis Management Championship in Telford, England. His second and third-round scores of 66 and 65, respectively, were matched by only one other rival. An opening 72, however, consigned him to a share of seventh place, four strokes off the winning score belonging to Josh Hilleard.