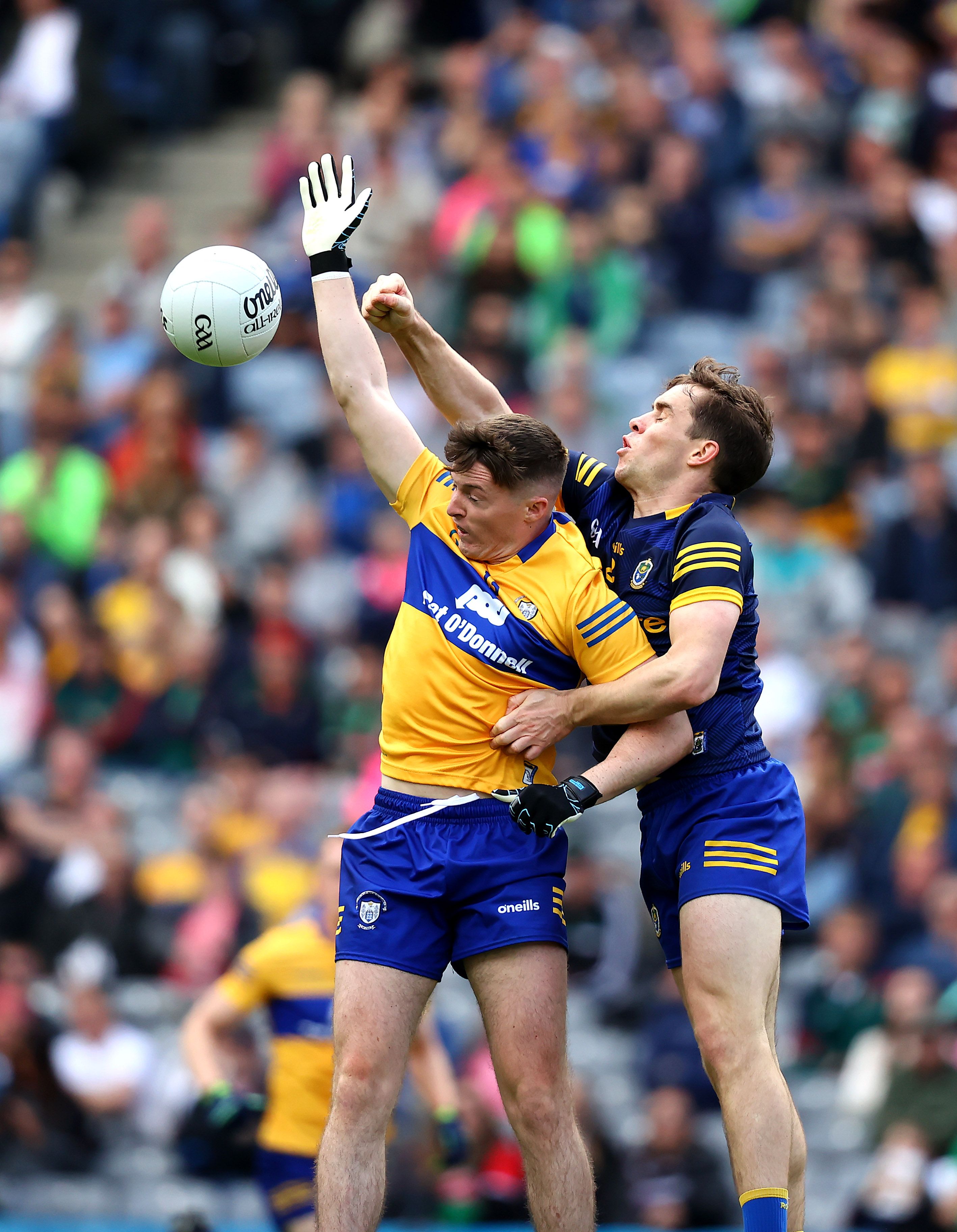 Kerry to meet Mayo in quarters

Now for some real action! Those of you who felt there was too much pussy-footing around with Dublin and Kerry remaining untested in their provinces must be licking your lips in anticipation of the number of big games coming down the line.

Not only has Kerry to meet Mayo following Monday’s quarter-final draw, but in all probability if they beat the Connacht county, they will face Dublin, who should account for Cork, in that side of the semi-final draw.

So no soft All-Irelands for anyone here this year folks. And the winners in that context is the huge GAA community across the globe.

In the other quarter final side, surprise package Armagh will fancy their chances against Connacht champions Galway knowing that if they win, they could possibly be back on the Ulster merry-go-round if Derry can beat outsiders Clare in the other quarter-final contest.

While Kerry will know their spanking of Mayo in the League Final will count for little in this quarter-final showdown, nevertheless they also are the form side, something James Horan’s outfit is still striving to find in their unconvincing victories over Monaghan and in particular Kildare on Saturday, when they were helped to a four-point turnaround by poor refereeing decisions.

Horan was first to put his hands up after the match by declaring: “Hugely satisfied with how we ground it out playing so poorly.”

Can they find form in a few weeks to go toe-to-toe with the Kingdom? It’s doubtful but having said that, they must be credited for coming from six points down 10 minutes into the second half to kick on for victory against the naïve Lilywhites.

The one minus facing Jack O’Connor’s Kerry is the fact that they haven’t been tested in Munster and Mayo will be the first Division One team they will confront in the 2022 campaign.

Should as expected, they progress, they will almost certainly face a real test against Dublin, who have had a Jeykll and Hyde season as they left the nadir of league form behind to become the Dubs of old in the championship.

Beating Wexford, Meath and Kildare in winning a 61st Leinster football title was nothing to write home about, but it was the manner of the clinical way Dessie Farrell’s side put other teams to the sword, most especially those five first-half goals against Kildare, that has many people fancying them to go all the way again this summer.

You can easily find the reason for the transformation in blue – it coincided with the return of Con O’Callaghan who, after missing the entire league campaign, has transformed the forward line with his link play and ability to terrorise opposing defences.

Cork are not near the standard they should be performing at but they are improving and will provide a different type of opposition to Dublin because of their running game. But Dublin have too many big guns to deflect the best arsenal the Rebels can throw at them.

Armagh will not fear Galway, particularly after the way they have disposed of reigning All Ireland champions, Tyrone and again against Donegal on Sunday where they had 10-points to spare against a very fancied side.

Galway have accounted for the other big two in Connacht but with Clare beating Roscommon at the weekend and Mayo struggling to get back Kildare, the form line isn’t exactly at the upper end of the scale.

Padraic Joyce would have preferred to avoid Kieran McGeeney's side but now that it is a reality, he will want his big names like Shane Walsh, Padraig Conroy and co to stand up and be counted.

With all the noise around Dublin and Kerry, the Ulster champions Derry have again hardly been mentioned as they now face the weakest team left in the series – Clare.

Rory Gallagher showed great leadership in bringing the Oak Leaf county to their first provincial title in 24 years after dismantling Tyrone and then showing consistency with good wins over Monaghan and Donegal. So they will think they have the measure of Clare, though Colm Collins side have to be lauded for the way they have continued to punch above their weight over the past three years.

They showed great heart on Saturday by coming from five points down after 66 minutes, to edge past Anthony Cunningham’s Roscommon in one of the great Croke Park finishes by any team.

The only thing missing from Jamie Malone’s late winning score was a bigger crowd to herald the achievement of the Banner.

The quarter-final games are set to place on the weekend of June 25-26. The fact that Dublin, Cork, Kerry and Mayo are in the one side of the draw means we will see a new county on All-Ireland final day for the first time in nearly two decades.

Armagh haven’t appeared since losing to Tyrone in 2003 while Galway last appearance was their successful run through 2001. You have to gone back to 1993 to find  Derry in the final, when they beat Cork while it is all the way back to 1917 since the Banner reached a final.

Is the “force” with Armagh this year in the same way you felt it was pushing Tyrone to great heights in 2021?

Anyone who saw the manner of their wins against Donegal on Sunday and previously against the Red Hand county must concede that when  the Orchard County bring intensity and a great hunger into their play, they are a real handful for anyone.

Armagh Coach Kieran Donaghy has experienced years when you feel your name is on a vessel and others when a team struggles to get out of a malaise.

“Yeah we have momentum now, it's a valuable asset. It's very hard to get momentum so when you get it you've got to protect it, honor it, and keep your work-rate high. You've got to keep going to the well, harder and harder. If you don't then the momentum will slip away from you and you can't get it back. So while we have it we've got to mind it and continue to work the way we have been, and hopefully it will stay on our side.”

He was speaking after Armagh had turned around a big loss to Donegal in the first round into a 11-point win at St Tiernach's Park.

“Huge credit to the players. We asked a lot out of them, to dig really deep in those six weeks. I think the players are getting their just rewards for just how hard they've worked, so I'm delighted for them as a group.

“You couldn't envisage that winning margin, because Donegal are a really good side. We got a fantastic start with Rory's goal, a top quality goal.

“Donegal then showed their teeth, and kicked on with five or six points, and we were thinking that this is going to be tough to deal with. But we responded well just before half time and kicked some massive scores.

“I'm delighted for Rian O'Neill. He had a tough day in Ballybofey, just one of those games. I'm a full-forward myself, so when they don't go your way it can be a tough day inside there. I just hope the Armagh fans show up in Croke Park because they were a huge factor in us getting over the line.”

Armagh had a dream start after 10 seconds when Rory Grugan’s caught and despatched a brilliant shot into the Donegal net. The omens appeared to be dressed in orange but for the following 20 minutes Donegal played the brand of quick inter-passing game that had their opponents chasing shadows as they turned around the early setback to lead by 0-8 to 1-2.

However the game had another major twist, one from which the loser subsequently didn’t recover when Shaun Patton delivered two poor kick outs which were both intercepted. They got away with the first one – more or less – when Caolan Ward made a great save on the line as Stefan Campbell chose to place rather than blast his shot into the net. Rian O’Neill’s point from the resultant 45 was a little consolation for a glaring goal miss.

However with the very next restart Patton was again intercepted forcing him to haul down Aidan Nugent inside the area. This led to a penalty and a black card for the custodian as O’Neill sent stand-in 'keeper Caolan McGonagle the wrong way from the spot.

This meant Donegal had to sacrifice ace attacker Paddy McBrearty for the remainder of the half  to allow  sub goalkeeper Michael Lynch go between the posts until Patton’s time in the sin-bin had elapsed.

However the horse had bolted as the Orchard men led by 0-8 to 0-10 at the break and there was no way back for Donegal when the winners shot the first five scores of the second half without reply.

The game was over long before the final whistle with Donegal getting consolation scores from the barely effective Michael Murphy with two frees  and  the gallnt Jason McGee from play.

Armagh were on the crest of a wave and when big midfielder Stephen Sheridan slid in for a third major from Ben Crealey’s assist, it put the icing on the cake for McGeeney’s maestros.

In the other Round Two qualifier, Clare were the toast of  Croke Park when they showed remarkable endurance to turn a five-point deficit with four minutes remaining into a one point victory against Roscommon, who will almost certainly see Anthony Cunningham replaced following the unexpected  2-15 to 1-17 defeat.

Cork were made fight all the way by Limerick before emerging 2-18 to 1-16 winners, thanks to a fine display by full-forward Brian Hurley.

Mayo huffed and puffed against Kildare before goals from Oisin Mullin and Jordan Flynn saw them flattering to win by 2-13 to 0-14.

In hurling’s preliminary quarter-final  games,  Wexford had too much skill for a game Kerry team in Austin Stack Park, Tralee, where they emerged victorious by 3-30 to 0-18 while Cork had to work hard in Corrigan Park before finally putting Antrim to the sword by 3-27 to 2-19.