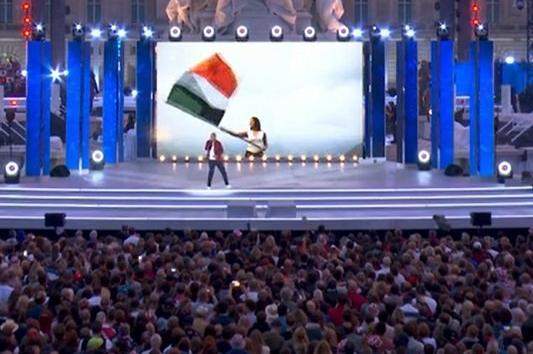 The Irish tricolor flies during the platinum jubilee celebrations

The BBC has apologized and said that it will re-edit footage on its iPlayer service after flashing up a tricolor to represent Northern Ireland during the Queen’s Jubilee celebrations outside Buckingham Palace.

Four days of events took place in Britain to celebrate Queen Elizabeth II’s 70 years on the throne with many events taking place outside Buckingham Place in front of large crowds.

The tricolor incident happened during a poem by London comedian Doc Brown in front of 20,000 spectators. The first image to appear was English flags and a Three Lion England badge; then a Welsh flag featuring a dragon; then a person waving the Irish tricolor followed by a Scottish flag.

“The incorrect flag appeared in a brief montage during Doc Brown’s appearance last night,” a spokesperson said: “We apologize for the error and the sequence will be edited on iPlayer.”

DUP East Derry MP Gregory Campbell said: “It was unfortunate in a very short video clip during the event when the four nations that make up the United Kingdom were visually represented by logos or flags that the Irish tricolor was used instead of the Ulster banner.

“Hopefully those responsible will have realized their mistake and will ensure that in the event of any future occasion where the four countries of the UK are to be visually represented, more care is taken to ensure a mistake like this one is not repeated.”

On social media one person joked: “The Brits are trying to tell us something!”

Another replied: “There is no mistake, Northern Ireland has no official flag. Until then, as part of Ireland, the Tricolour is most appropriate."