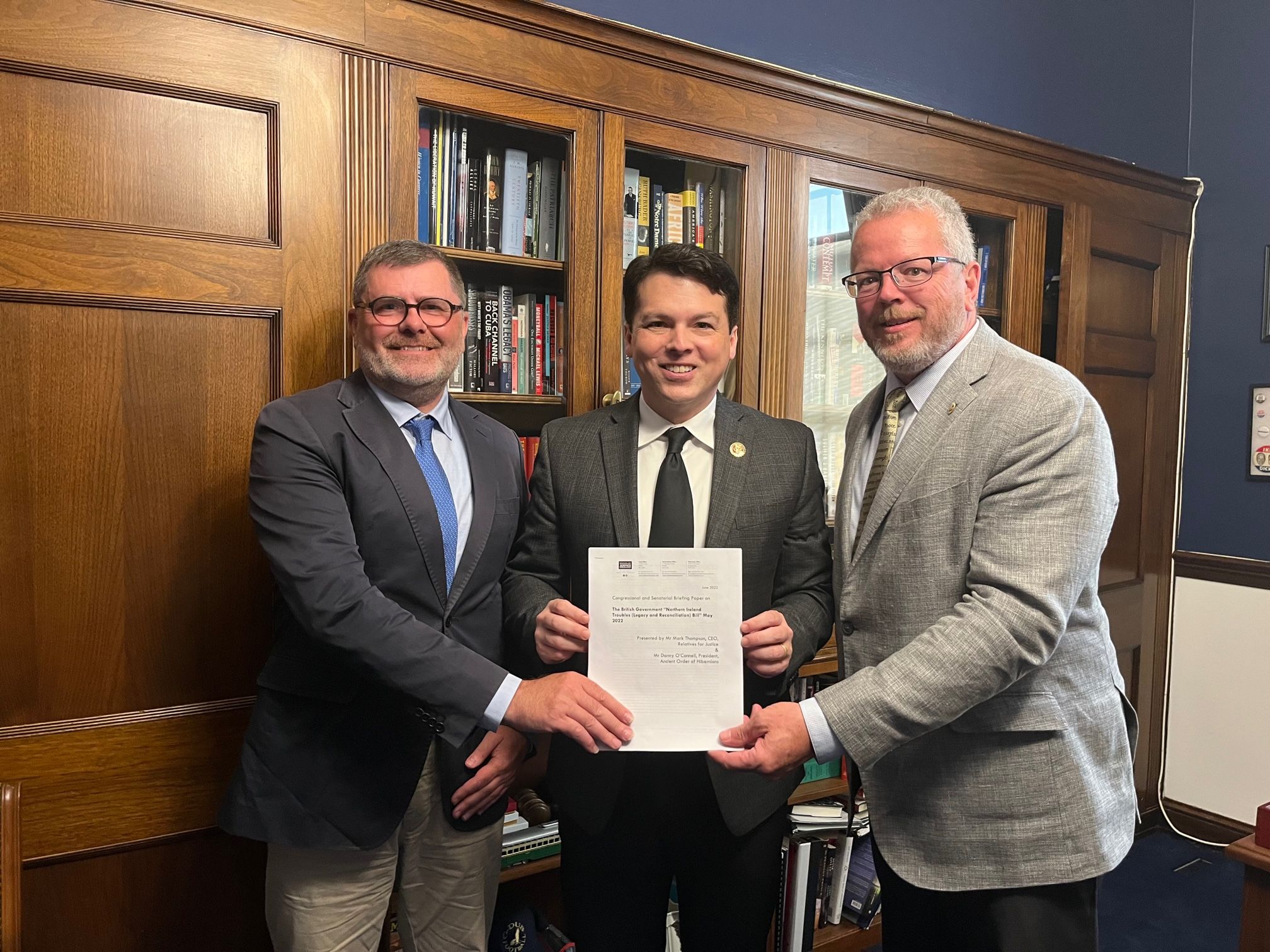 Members of the National Board of the Ancient Order of Hibernians traveled to Washington, D.C. last week to meet with leading Capitol Hill legislators.

The letter requested bipartisan condemnation of the United Kingdom's plans to breach the Northern Ireland Protocol.

The Hibernians also requested that the United States not consider any future trade agreement with the United Kingdom if it continues its practice of unilateral action aimed at renouncing its commitments under international treaties.

The letter stated: "On 13 June 2022, the United Kingdom introduced the "The Northern Ireland Protocol Bill" designed to unilaterally scrap the Northern Ireland protocol of the Brexit agreement which Prime Minister Johnson signed only three years ago; a move they admit breeches the U.K.'s obligations under international law.  Once again, Britain has shown that its commitments under signed international treaty are meaningless; the U.K. believes that they can be redefined at will to fit the exigency of British politics. The Ancient Order of Hibernians questions how serious consideration can be given to signing a trade deal with such a partner.

"As offensive as Britain's breach of faith is, their justifications for doing so are an insult to the world's intelligence. Britain claims they are doing so to protect the Good Friday Agreement from the Northern Ireland Protocol, a protocol only necessitated by the Brexit that they, and only they, created.

"Throughout the run-up to the Brexit referendum, anyone who mentioned that Brexit posed great difficulties to Britain's commitments under the Good Friday Agreement was dubbed a 'scaremonger,' that opponents were using the Good Friday Agreement as a 'shibboleth.'  Current Foreign Secretary Liz Truss trivialized the impact of Brexit on Ireland as 'affecting a few farmers with turnips in the back of their trucks'; oblivious to the fact that thanks to the Good Friday Agreement, over 50,000 people cross the invisible border today to work, attend school, or seek medical treatment in the other community, forging invaluable bonds of trust between the two communities.

"It is Brexit that has always been the threat to the Good Friday Agreement, it is the Irish Protocol that mitigates that threat.

"Perhaps the most hypocritical argument against the Irish Protocol is that it violates the Good Friday Agreement of Consent.  Brexit was imposed on the community of Northern Ireland, who rejected it in the Brexit referendum by 56%, without their consent. The absurdity and duplicity of claiming to be defending 'consensus' by engaging in unilateral action beggars belief.

"The United Kingdom has tried to make the case that the Irish Protocol is having a devastating impact on the Northern Irish Economy, from 'Sausage Wars' to 'the Christmas Cracker Crisis.' This does not hold up to close examination of reality. A study from the London-based National Institute of Economic and Social Research shows that the Northern Ireland economy is outperforming the U.K. average, "an outcome of the Northern Irish protocol and its special status in the Brexit arrangements." The true threat to Northern Ireland's economy is the perpetual uncertainty the Johnson government is injecting by threatening to scrap the protocol.

"Any effective relationship must be built on honesty and trust; the U.S. cannot ignore duplicity and equivocation simply on the nostalgia of an alleged "Special relationship." How can the United States possibly consider entering into any new treaties or trade agreements with a nation that has shown complete contempt for the concept of commitment that is the foundation of such deals?

"The Hibernians respectfully ask that the Senate make clear that the United States will not negotiate future trade deals with a Britain that continues to use unilateral action rather than negotiation as a means to resolve issues with its current international commitments."