Home Galway vs. Armagh is one to watch 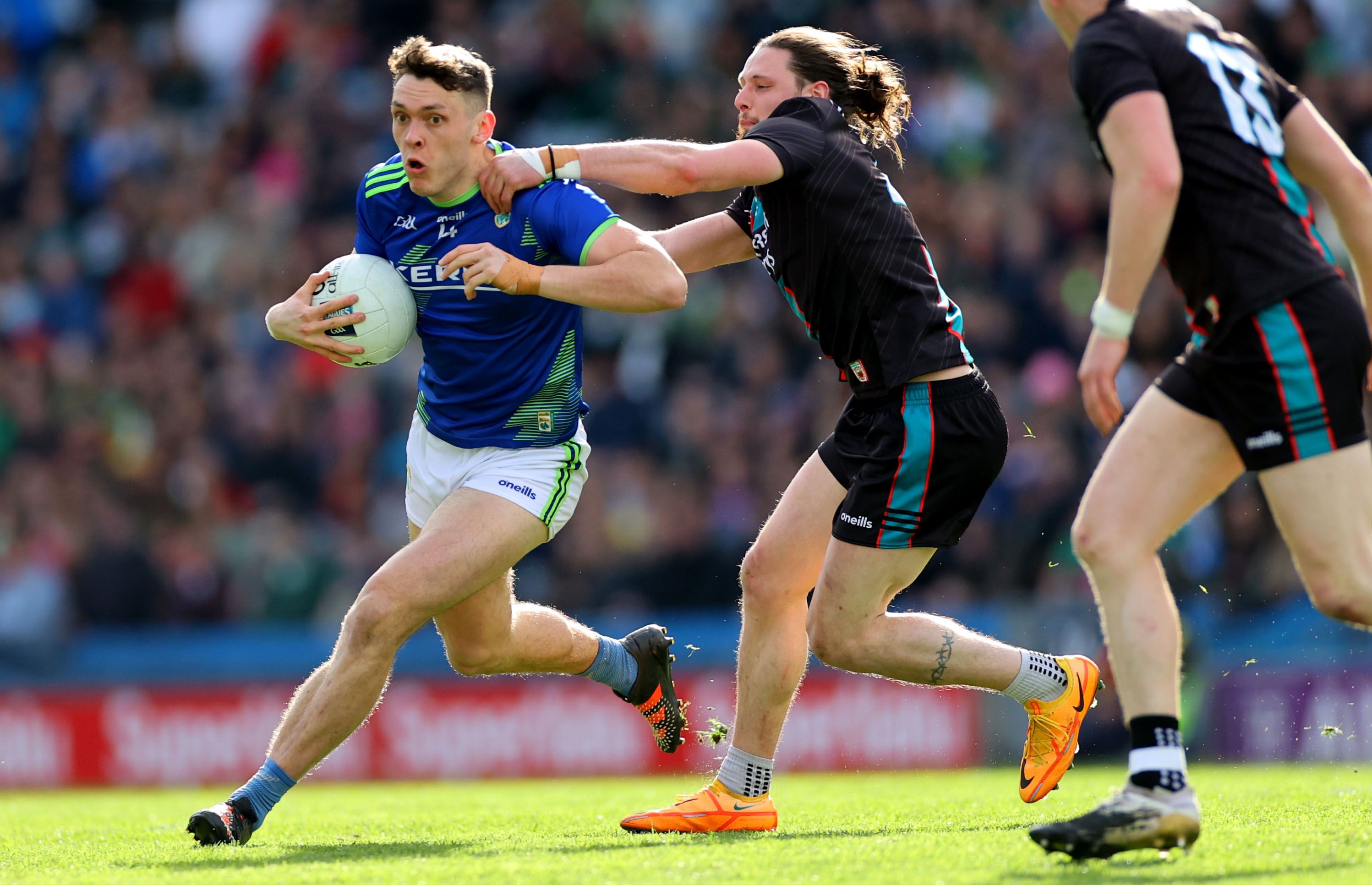 Kerry’s David Clifford won the personal battle against Padraig O'Hora of Mayo in the League final in April. INPHO/JAMES CROMBIE

Galway vs. Armagh is one to watch

This year’s All-Ireland football championship is down to the last eight and this weekend we have the quarter-finals at Croke Park. But only one of the four games looks like it will be a close contest, and that is the meeting of Galway and Armagh on Sunday.

The Orchard County are on a roll with back-door wins over Ulster rivals Derry and Donegal and I think they will probably be too strong for Galway, who haven’t played since May 29 when they beat Roscommon in the Connacht final. Right now, it looks like Connacht is the weakest province for football and I am going for Armagh to reach the semi-final where they could meet Derry.

On Saturday afternoon Derry should be too strong for Clare; meanwhile the other game on Saturday sees Dublin play Cork at 6 p.m., a very late throw-in for Cork supporters, who may want to travel home on Saturday night, but the feeling is that there won’t be much Cork support for their footballers against Dublin who are looking like they are back to their form of a few years ago.

No doubt the most attractive of the four games is on Sunday afternoon when Kerry play Mayo. It’s three years since the counties met in the Super 8’s in Killarney when Kerry won by 10 points. But more important Kerry hammered Mayo 3-19 to 0-13 in the National League final at Croke Park on April 3. A feature of that game was the duel between Kerry’s star man David Clifford and Mayo’s Padraig O’Hora, which Clifford easily won.

Clifford missed Kerry’s easy Munster final win over Limerick with a slight injury, but should be fit on Sunday. Mayo showed a bit of character when they came back to beat Kildare in the qualifiers two weeks ago. But I don’t think this current Mayo team are as good as the team that reached and lost four finals in the last six years. So that 71-year-old wait for another Sam Maguire Cup is likely to continue and my semi-final predictions are: Dublin v Kerry and Derry v Armagh. The semi-finals will be played on July 9 and 10.

Ireland coach Andy Farrell has included five uncapped players in his 40-man squad for the upcoming tour of New Zealand. Leinster trio Ciaran Frawley, Joe McCarthy and Jimmy O’Brien have secured places on the plane, alongside Munster’s Jeremy Loughman and Connacht’s Cian Prendergast. Robert Baloucoune, Andrew Conway, Chris Farrell and Ronan Kelleher have been ruled out of the three-match Test series through injury. Ireland will play New Zealand on July 2, 9 and 16 in Auckland, Dunedin and Wellington respectively, with midweek games against the Maori All Blacks scheduled for June 29 and July 12. Several of the five uncapped players and the dozen with less than 10 caps in the squad are expected to feature in the opening tour game against the Maori All Blacks in Hamilton on June 29.

Stephanie Roche has been recalled by the Republic of Ireland for their Women's World Cup qualifier against Georgia on June 27. Roche, who won the last of her 55 caps in 2019, has been in great form with Peamount United and has earned a recall from manager Vera Pauw. ‘‘Stephanie is a fantastic person and a fantastic athlete. I had to disappoint her many times. We have always kept very good contact, I have always explained to her where she stands. I was always honest and she was always honest with me, said Pauw. The manager  has handed a first call-up to Durham goalkeeper Naoisha McAloon while defender Diane Caldwell returns after missing the draw away to Sweden in April. Wexford Youths pair Aoibheann Clancy and Ellen Molloy are unavailable due to sitting their Leaving Certificate exams while Pauw is also without Savannah McCarthy, Megan Campbell, Aoife Colvill, Rianna Jarrett, Leanne Kiernan and Kyra Carusa due to injury. The Irish women travelled to Turkey for a training camp last week and on Friday they fly to Tbilisi on Friday next ahead of the game against Georgia. The last two qualifying games will against Finland in Dublin non Sept. 1 and away to Slovakia on Sept 6.

Stephanie Roche in squad training with the Republic of Ireland. INPHO/EVAN TREACY

The All-Ireland Junior Football semi-finals will be played at the GAA’s National Games Development Centre in Abbottstown on Friday, July 8 when Warwickshire play New York at 5pm and that will be followed by London versus Kilkenny at 7pm. The Junior final will be played at Croke Park two days later as a curtain raiser to the second All-Ireland senior football semi-final.

Former Meath star Colm O’Rourke, who now works as a pundit with
RTE television, has ruled himself out of the running for the vacant Meath football manager’s job to replace Andy McEntee, who stepped down after six years in charge last week.

O’Rourke said: ‘‘My wife has a very negative view toward managing the county team and with good reason when you see the upshot of Andy McEntee going and the social media abuse than has taken place.’’ McEntee’s son Shane revealed that his father received hate mail and was abused on social media during his time as manager.

The death occurred last week for former Irish international Noel Campbell at the age of 72. Noel was the last senior international to be capped whilst playing for St Patrick’s Athletic and the first mainland Europe-based player to represent Ireland during his time in Cologne. He also managed Shamrock Rovers on his return to Ireland.

The Dubliner played for the Saints from 1966 until 1971 when he was transferred to Fortuna Koln who were then playing in the Regionalliga West in Germany. He helped Fortuna win promotion to the Bundesliga in 1973.

Prior to leaving Inchicore Noel won the first of his 11 caps against Austria at Dalymount in May 1971. When he retired from football, Noel worked as golf manager in the K Club in Kildare.