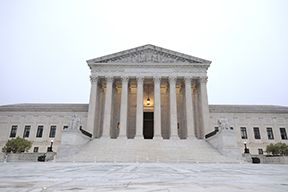 Astronomers see the universe as an array of galaxies flying apart, though not so far or so fast that we can't see them with space-based telescopes.

When it comes to certain flashpoint issues, the states that make up our United States seem to be flying apart though, by virtue of our relative confinement on planet earth, we can still each other.

And see each other up close and personal.

Two of the biggest flashpoint issues, abortion and guns, were the subject of Supreme Court decisions last week.

At a time when Congress seems incapable of doing much of anything - the bipartisan gun measure being a welcome exception - and at a time when President Biden seems more like a hostage to grim fortune rather than a director of collective fortune, it is the Supreme Court, most specifically its ultra conservative majority, that has the bit between its teeth.

And for sure it was racing for the finish line in recent days as the current term came to a resounding end.

If anyone wants to complain about "big government" they only have to turn their eyes on the five members of the court who are currently steering its direction with zeal and purpose. Justice Roberts, though he may join the other five in decisions, still, arguably, deserves to be recognized as a mere conservative.

The issue of abortion is a fundamental and emotive one no matter what way you approach it. The same applies to guns. There appears to be little or no middle ground when it comes to either.

The country was already morphing into a patchwork quilt of states with regard to guns and women's reproductive rights. As with the speeding galaxies, that morphing process has just been given a jolt and is accelerating the patchwork process.

We have the accept the bona fides of most people who feel so strongly about guns and abortion. That would be the majority of us who don't rate as violent gun nuts or outright misogynists, though, heaven help us, the United States seems to have all too many of both.

But with guns there is a clearly recognizable paranoia when it comes to government. A recent BBC interview of gun owners presented to the world a dystopian picture of an America populated by people armed to the teeth and on their guard against home invasion by faceless individuals (fill in the blanks yourselves) and the agents of a tyrannical government.

The interviewees presented this appalling vista in the most matter of fact manner, one which only served to make their view of their American world all the more frightening and depressing.

With regard to abortion and reproductive rights, the agent at the door of every home in the land is not a tyrannical government, but an imbalanced Supreme Court, one that appears to be more political and ideological than strictly judicial in its decision making.

Roe V Wade was not to everyone's liking. Far from it. But it was "settled law" as Justices Kavanaugh and Gorsuch indicated when being interviewed, prior to confirmation, by senators, both Republican and Democrat.

Clearly it wasn't; so now a great unsettling.

So where do we go from here? Well, we simply go on.

The demise of Roe has unleashed a firestorm of anguish and protest on both sides of the abortion issue.

The sweeping aside of a New York State law on gun carrying by the Supreme Court has raised questions about the court's majority being consistent when it comes to the supposedly sacrosanct rights of self-regulation on the part of the states.

As things stand, the current makeup of the Supreme Court seems set for years to come. If it continues to be an agent of inconsistency and divisiveness it will further erode its aura of legitimacy - an aura already so dim in the court of public opinion that it resembles a galaxy beyond the range of even our most powerful telescopes.