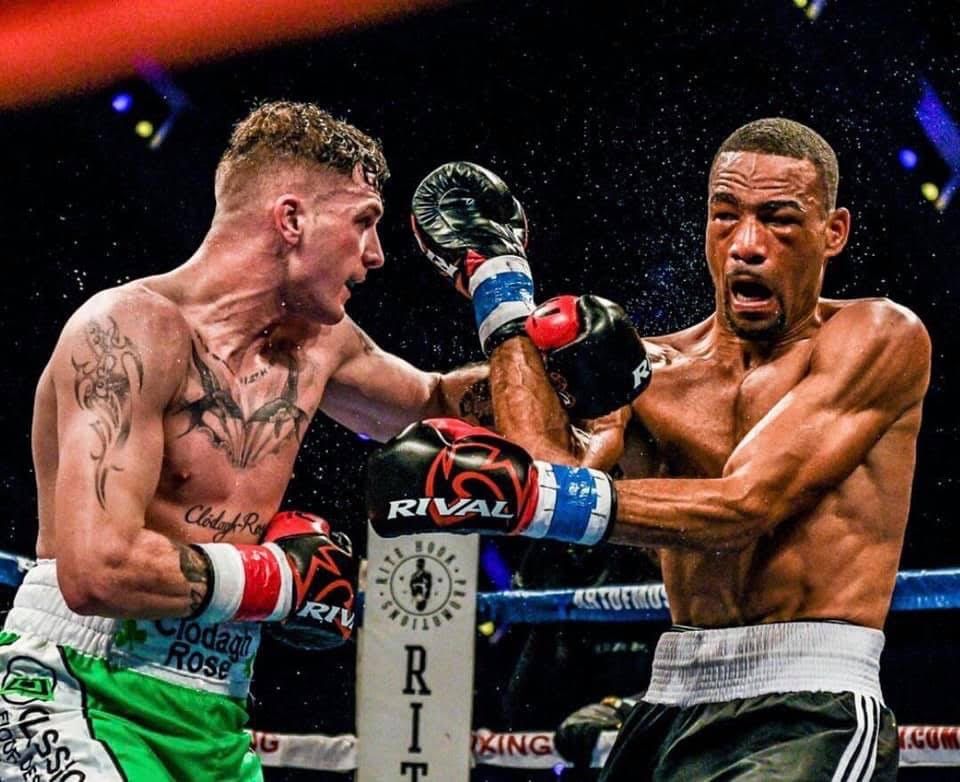 Connor "The Kid" Coyle, left, in action in a fight a couple of years ago.

A split points winner over the tenacious Antonio Todd in Orlando on May 21, Coyle is now ranked #13 in the 160-pound division by the World Boxing Association [WBA].  The Todd victory upped his ledger to 16-0 with seven KOs.

“We’re extremely proud of Connor,” said Jody Caliguire of Fire Fist Boxing Promotions. “Todd was a really difficult style and a great test for Connor. There’s still work to be done but we anticipate him being in a big fight in the near future.”

Five months removed from his gallant losing effort against WBA featherweight champion Leigh Wood, Michael “Mick” Conlan returns to action in Belfast.He faces Colombian puncher Miguel Marriaga at The SSE Arena on Aug. 6.  The 10-rounder will be part of Belfast’s annual Féile an Phobail festival. Conlan-Marriaga and undercard bouts will stream live and exclusively in the U.S. on ESPN+.

“There is no place like home, and we are thrilled that Mick will get another chance to perform in front of the tremendous Belfast fans,” said Top Rank chairman Bob Arum. “With a win over a solid opponent like Marriaga, he’ll once again be contending for a featherweight world title in short order.”

“I’m very excited to be back fighting in my beloved Belfast,” said Conlan. "Miguel is a great fighter, and together we'll give the fans a memorable night at The SSE Arena. This bout will get me straight back in the mix for world titles, and I’m relishing the task at hand.”

Added brother Jamie Conlan, CEO of Conlan Boxing: “The road back for Michael starts with Miguel Marriaga. Miguel is a dangerous man and one of the biggest punchers in the division who has mixed it up at the very top. August 6 will be another electric night in the city in what is becoming an annual Irish boxing tradition with Michael's fight night at the Féile festival. The goal remains the same. Michael Conlan will be Ireland’s next world champion.”

A two-time Irish Olympian, this marks Conlan's fourth professional outing in Belfast and third time headlining during Féile an Phobail. In August 2019, he knocked out Diego Alberto Ruiz in front of a sold-out crowd at Falls Park. Last summer, another sold-out crowd packed Falls Park as Conlan (16-1, 8 KOs) bested former junior featherweight world champion TJ Doheny over 12 rounds. The Doheny victory earned Conlan the mandatory position to fight Wood. In an epic Fight of the Year battle, Conlan, who was ahead on the scorecards, lost via 12th-round stoppage.