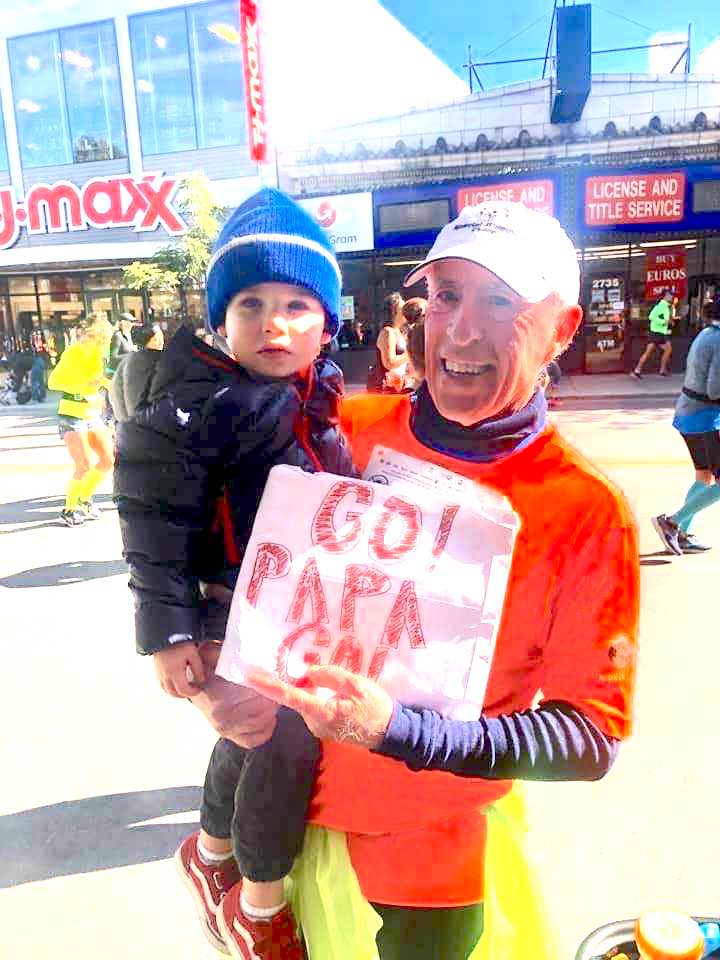 He’s known by many names in the toddlin’ town: Jim, Skinny, Skin, Doctor, or The Thin Man.

A native of that southside of Chicago duchy of Irish Catholicism known as the 19th Ward, he continues to wheel and deal his way into the hearts and pockets of Chicago politicians.

“My father was a Chicago policeman for 30 years.” His dad emigrated from Limerick. “My mother’s mother was one of 22!”

Skinny has been known to swing elections with just the vote of his many cousins.

James Sheahan was the “runt of the family” of nine kids; hence the name Skinny.

“All my brothers were a lot bigger than me. Three of them played college football. They’re all tough guys. I wasn’t tough. I’m very good at making fun of people, I’ve always been a little wiseass. But I could run fast, so they had a tough time chasing me.”

Maybe that’s what got him started. “I’ve run 49 marathons, including Dublin and Boston a dozen times.”

Was honored to spend time with Skinny Sheahan and the Sheahan family @SSIrishParade #TraditionMarchesOn pic.twitter.com/PnkXRhBVGg

And Chicago of course. But the legend of Skinny Sheahan took hold while working for Richard M. Daley in the halcyon days of Chicago Irish politics, while Director of the Mayor’s Office of Special Events.

Skinny was Daley’s guy, the glue in almost every major undertaking of the City and County for over 30 years, including the Chicago Marathon, Taste of Chicago, hundreds of street festivals, ethnic fests, concerts, movie shoots, conventions, Super Bowl Champion celebrations, World Series parades, all of it.

The mythology of Skinny has followed him throughout his careers as a teacher, with Daley, as convention center honcho, and more recently with Special Olympics, where his talents currently shine raising dough for this worthy charity.

When the late Jane Byrne was Mayor, the 19th Ward Democratic Organization hated her, and she was quite vocal in her disdain for them. Skinny’s brother Mike was Alderman and there was a huge fundraiser scheduled for the ward.

A local actress was performing her one-woman Mayoral comedy, BRYNE BABY BRYNE.  Skinny hired her to show up in a limo, dressed as Mayor Byrne, escorted her to the stage and told her, “Just make sure you get your hands on the microphone.”

That she did, and produced a map of the city, took out a scissors and proposed cutting the 19th Ward entirely out of Chicago. The audience, 90 per cent of whom believed it to be the real Jane Byrne, were apoplectic.

“She said all this outrageous, crazy stuff, and then I was like ‘Shit, I’m gettin’ outta here!’”

Give it up for this guy, running his 49th and FINAL #ChicagoMarathon ! Age 73. Go Skinny! pic.twitter.com/BHD4zlZoFt

In 1996, Chicago hosted the World Congress of Religions with the Dalai Lama, the spiritual leader of 50 million Tibetan Buddhists worldwide. Skinny hired his old Southside pal Tommy McGlynn to drive the limo for airport pick-up. Mayor Daley and his late wife Maggie were in the car as well. On the drive into town Mrs. Daley remarked that it was getting warm in the back seat, so Tommy leaned over and said, “Hey Dolly, there’s a switch right above your head dere, just give ‘dat a flick Dolly and it should cool you off!”

When Skinny met them at their destination Mrs. Daley had smoke coming out of her ears. Somebody called it an “international incident” because Tommy McGlynn had called the holy man, “Dolly” at least ten times!

Some say Skinny’s greatest triumph came after the venerable Southside Irish St. Patrick’s Day Parade was canceled for two years due to bawdy behavior and drunkenness by “outsiders”. Skinny led a faction to bring the parade back under more family friendly terms after Daley, (who was now out of office), called Skinny, and told him, “You better fix that parade!”

After a very contentious deadline meeting at City Hall with brass and bureaucrats, Skinny was sternly told the city would NOT be issuing a parade permit this year.

Outside the meeting was a bank of microphones and cameras set up for a press conference, with every news outlet in town waiting to hear the verdict. One reporter shouted, “How did it go, Skinny?”

Big congratulations to Skinny Sheahan for being awarded the Anne M. Burke Award for his dedication to our athletes! pic.twitter.com/Fp2UqQ6Q2v

Skinny grabbed the mic, “Oh it was tremendous. But before I go any further, I’d like to thank Mayor Rahm Emanuel and Police Superintendent McCarthy…because today the city has agreed to issue the permit for the Southside Irish Parade. The Parade is back on!”

The place went nuts and Skinny laughs about it now. “What could they do? It was in all the papers; it was all over every news station!”