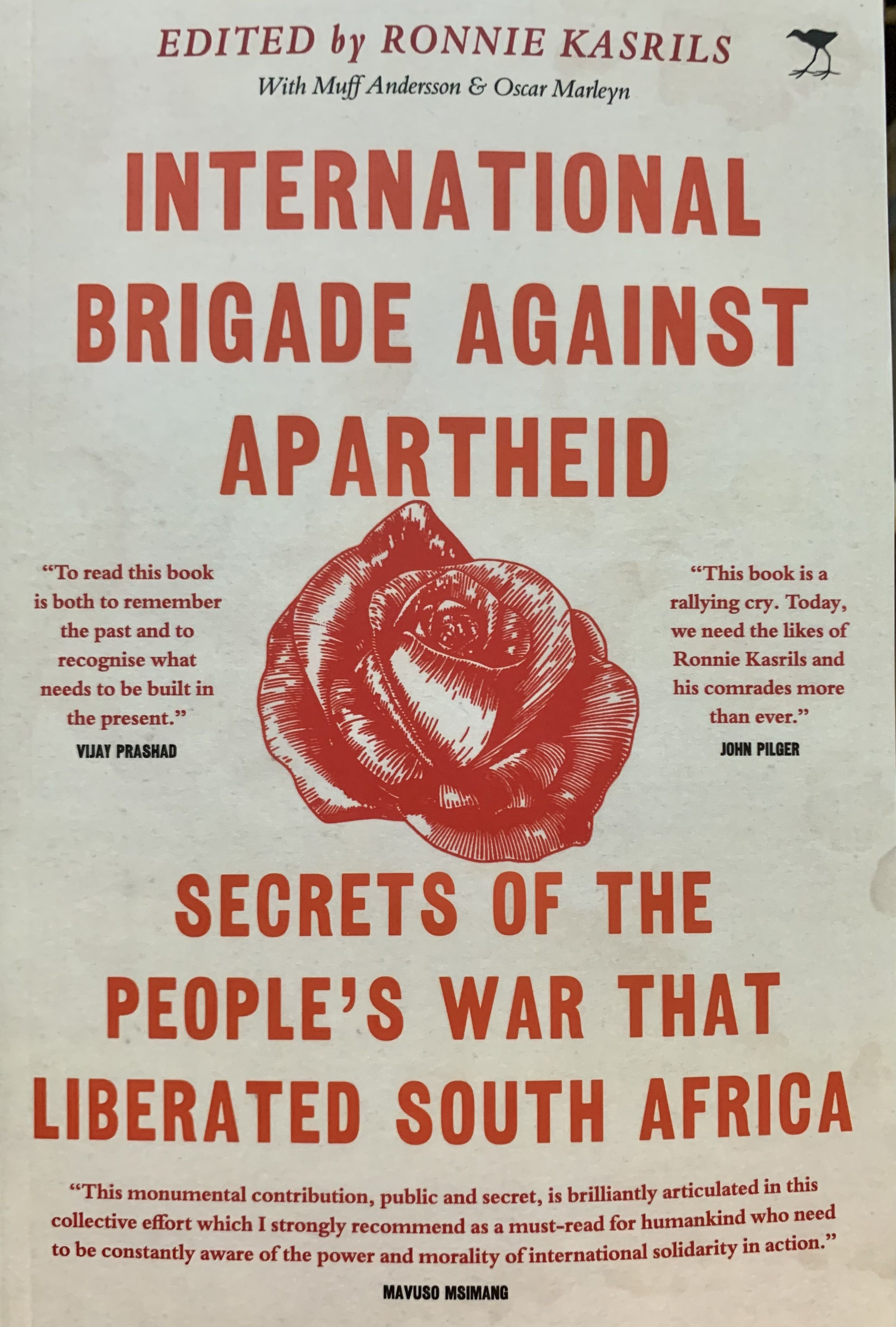 I thought it would be a good idea to dedicate an occasional column to books. We can return to Brexit, the Protocol, and other such matters at another time.

So in this column I am reviewing three books: "United Nation" by Frank Connolly, "On The Blanket" by Eoghan Mac Cormaic, and "International Brigade against Apartheid: Secrets of the People’s War that Liberated South Africa," By Ronnie Kasrils.

These are clearly political books, which may not surprise any of you. I am also conscious that these three are written by men. So lest I give you the wrong impression let me make it clear that my reading activity is not limited to political books, or to male authors. I binge read, so Sebastian Barry’s "The Sacred Scripture," Billy Connolly’s "Windswept and Interesting" are also on the go, along with "I’m Your Man" by Sylvie Simmons. I prefer real books to Kindle or other electronic models. Richard is a Kindleman. But a book is a book and for me there is no substitute. I am also always taken by a nicely presented tome. Imelda May’s "A Lick And A Promise" is a great example. I wholeheartedly recommend it.

"International Brigade against Apartheid: Secrets of the People’s War that Liberated South Africa."

I have known Ronnie Kasrils for many years. He is a friend of Ireland and a champion of those struggling around the world for freedom and justice. In 1961 he was a founding member, along with Nelson Mandela and others, of Umkhonto we Siswe – MK for short – the armed wing of the African National Congress. In the post-apartheid South Africa he was the Minister for Intelligence and Minister for Water.

Ronnie is currently in Ireland promoting "International Brigade against Apartheid: Secrets of the People’s War that Liberated South Africa." It provides a remarkable insight into the international solidarity that was crucial in achieving a free South Africa. Last week I had the honor and pleasure of launching the book with Ronnie at an event in Áras Uí Chonghaile.

During his long years of service to MK and the ANC, Ronnie spent much of his time in exile organizing those outside of South Africa who were part of the anti-apartheid campaign, as well as those who assisted MK. The International Brigade, Ronnie writes, “served a just cause for freedom against tyranny, and were composed of volunteers motivated by the spirit of international solidarity.”

Irish citizens were hugely supportive of the struggle against apartheid. The stand taken by the Dunnes Store workers remains a shining example of the solidarity of workers in one country for workers in another.

Irish republicans, too, have long and close fraternal links with the ANC and MK. Kadar Asmal, who founded the Irish Anti-Apartheid Movement and was later a minister in post-apartheid South Africa revealed in his book "Politics in My Blood" that the MK attack in June 1980 on the Sasolburg oil refinery – South Africa’s most important – involved the IRA.

In the introduction to his book, Ronnie refers to the concept of Ubuntu. It is a recognition that we are all connected together in our humanity. This is the essence of international solidarity. Where we see injustice, either in our own place or in Palestine or South Africa, we have a responsibility to help end it. Ar scath a cheile a maireann na daoine.

Ronnie’s book is a must read for anyone interested in national liberation struggle. His remarks at the Belfast launch were inspirational and insightful.

Eoghan Mac Cormaic is one of our most willing, cheerful, modest, and clever writers. He is part of that growing band of republicans, particularly former political prisoners, who have produced an account of their experiences. This new book by Eoghan is based on his Pluid-Scéal na mBlocanna H 1976-81. Published by Coiscéim in 2021 it tells the story of Eoghan’s life On the Blanket, mostly in H Block 5.

In this English language version he takes us through the A to Z of prison resistance. Very clever. And funny as well. Eoghan always had a way with words. He used to produce crosswords in English and Irish for the entertainment of the other blanket men. In 1989 and 1990, Sinn Féin’s POW Department published two books of Irish crosswords Eoghan compiled and years later he published another one himself. He still produces a crossword puzzle for Éire Nua, the quarterly online United Ireland magazine.

Eoghan brings the same quirkiness with words to "On The Blanket." His A - the first chapter - gives us A for Arrival, Agóid, Aire, Authorities, Administration and AGs, Aifreann, Achs. And so on through the alphabet.

But what of Z or X I wondered to myself? No problem to Eoghan. X gives us X-rays and Xenophobia. Z gives us ZZ Top, a popular band of musicians of that era with long wild beards much like many of the blanket men. Zinc, part of soft metal tooth paste tubes which were used to write on the cell walls.

Eoghan describes the culture which underpinned the blanket protest, " …confined by the prison but not compliant to the prison. Although locked up twenty four hours a day this community was free from and rejected prison rules. For a period of five years or so they, we, became a people apart with our own rules, our own customs. We showed no respect for the prison, its screws, its governors, its rules, or its buildings because the only respect we had in that place was for ourselves. Degraded and terrorised, we prized and maintained our self respect always."

One of the most moving letters in Eoghan’s alphabet is C for Comradeship. In a page and a half he spells out what this meant in the H Blocks and Armagh Women’s’ Prison. It should continue to guide us today, as should the generosity, bravery, of our hunger strikers. I was also shocked to read that a third of those who served their time on the blanket are now dead. I don’t know if this is attributable to their prison experience, or a sign of the age our generation is at. Eoghan has ensured that they will not be forgotten.

It took Frank Connolly two years to write "United Nation." When he started, Brexit negotiations were meandering towards a "no deal." It was just before the arrival of the Covid pandemic. In this very readable book, Frank has opted for a narrative style which spells out events as they developed instead of a more formal set up dealing with questions on the economy, agriculture, education, health, the environment, constitutional law and the other pertinent issues.

This approach works well. Frank is a very good writer and an accomplished journalist. He has published best sellers including "NAMA-LAND" and "Tom Gilmartin." "United Nation" is a very accessible and compelling read, and an important and timely contribution to the growing debate on the future of Ireland.

Frank also interviews scores of people. These include senior political players from all quarters and experts on various aspects of social, economic, constitutional matters. But he also has a representative sample of opinion from the arts community with singers, writers, actors and poets, as well as grassroots community activists, particularly from the North.

As he said at the Belfast launch in the historic Linen Hall, he also sought the contributions of those with wisdom and experience on the key areas that required research …. "Brendan O’Leary and Colin Harvey on the constitutional questions and future political structures, David McWilliams and Seamus McGuinness on the potential of the all island economy, Dr Gabriel Scally on health and Tony Gallagher, Jarlath Burns and Áine Hyland on education, Mike Tomlinson on social welfare, John Sweeney on the environment, agriculture, transport, Dermot Walsh on the legal system and policing, Patricia King and Orla O’Connor on the rights of workers, of women, migrants and of other cultural and ethnic minorities in a new Ireland…….."

He sought advice and knowledge on the future relationship with Britain, the role of the EU and the U.S. and of wider global relations, along with influential figures from a unionist and loyalist cultural background who were willing to discuss the question of Irish unity. He also spoke to a number of academic researchers, historians, political representatives and activists.

Frank Connolly is a longstanding and active United Irelander, but this book is not about his opinion on what a new, unified Ireland would look like. Instead, "United Nation" is based on factual and informed research and the views of a wide range of interesting people, their representative organizations, and communities.

There are a number of core themes running through "United Nation." They include the reality that the type of independent, inclusive, integrated and united Ireland cannot happen without radical transformation in the delivery of basic needs for all our citizens on the island. It has never been about merely joining six and twenty six counties.

Most of those interviewed are agreed, no matter about their different opinions, that the future most be planned.

I will give the last word to Frank Connolly. He says: "It is perhaps an irony of history that it will require a strong left wing and radical government to make such a deep and profound transformation."

The three books reviewed here are available at the An Fhuiseog bookstore. Go to info@thelarkstore.ie: https://www.facebook.com/AnFhuiseog/