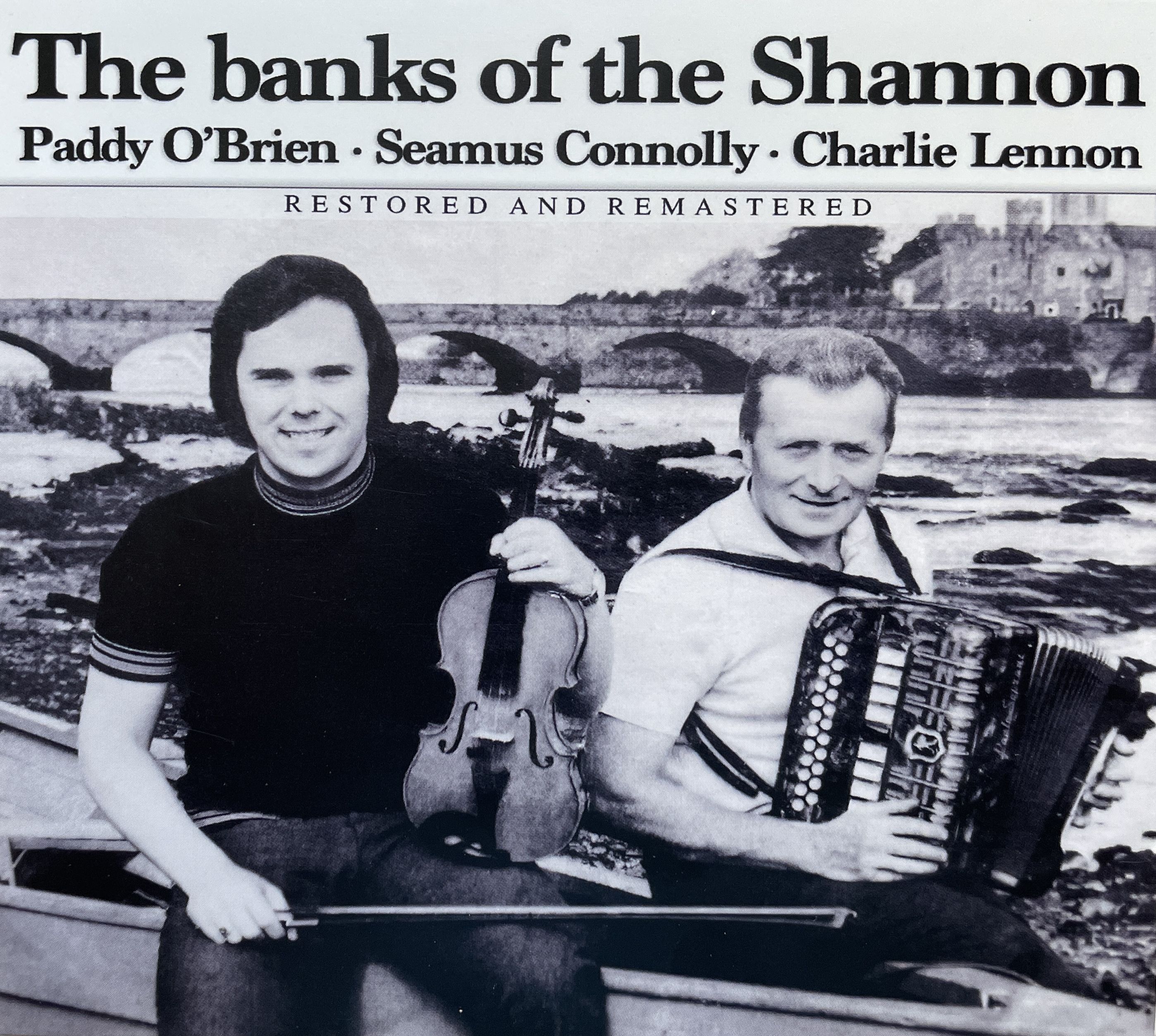 There are a fair few legendary recordings of Irish music out there and one of them is “The Banks of the Shannon,” by Paddy O’Brien (button accordion), Seamus Connolly (fiddle), and Charlie Lennon (piano).  If you’ve listened to it, you’ve doubtlessly felt the electric chemistry these three players share and understand why the recording is so highly rated by musicians and fans alike.  It is fabulous news, then, that Comhaltas Ceoltóirí Éireann, who gave it its original release in 1973, has elected to restore and reissue this highly influential recording, improved by the fact that they’ve done it in such outstanding style.

There’s not much for me to say about this classic release that hasn’t been said already.  The three play at a perfect pace, with impeccable expression and they do it with historically good musicianship.  The selections are as tasteful as can be and if you’re a young musician today who, after a quick glance at the track listing, recognizes particular tune pairings from your local sessions, it’s because of this album.  Despite its lack of length (its six tracks run a mere 16 minutes and 29), “The Banks” is the real deal and packs the mightiest of punches.

But the EP itself has a slightly vexed history.  After its original 1973 release, Green Linnet gave it a 1993 reissue, two years after O’Brien’s passing.  The CD’s 15 tracks included the original six from the 1973 Comhaltas issue, five solo tracks O’Brien made for Columbia Records before leaving for America in 1954 (two of which were edited to be shorter, and four of which Lennon was asked to add piano accompaniment to, a revisionist notion that is never a good idea no matter how well done), and four new Connolly tracks, three accompanied by Lennon and one purely solo.

The reissue was received warmly and gave the original album renewed accessibility.  However, in listening to the current restoration it becomes apparent that the collateral material added in the early 1990s, although excellent, diminished somewhat the impact of “The Banks” for first-time listeners. There, the Original Six were not only presented out of sequence but interleaved with the additional tracks, leaving it harder to hear what made “The Banks” so powerful on its initial release.  Further, presenting the 1973 tracks against modern recordings and remastered tracks originally issued on 78rpm resulted in a whole that was thin and somewhat uneven sounding.

This new six-track reissue, taken from the original analog tapes, changes the way we hear the album.  This is a restoration, meaning that modern studio technique has been employed to attune the recording to contemporary ears.  The result is an overall sound that is bold and full, with more low end and a bit better balance.  The instrumental blend “pops” differently.  Seasoned listeners will come away with a renewed appreciation for the album’s brilliance and a fresh sense of how powerful and really magical Connolly and O’Brien sounded together.  Those hearing it for the first time will wonder if it was recently recorded.

If you’re a fan of traditional Irish music, this new reissue of “The Banks of the Shannon” is a must-have, simply put.  The presentation is excellent, the sound is fabulous, and once again, the music is magnificent.  It’s a legendary release that belongs in every collection.  Visit comhaltas.ie for release details and availability.