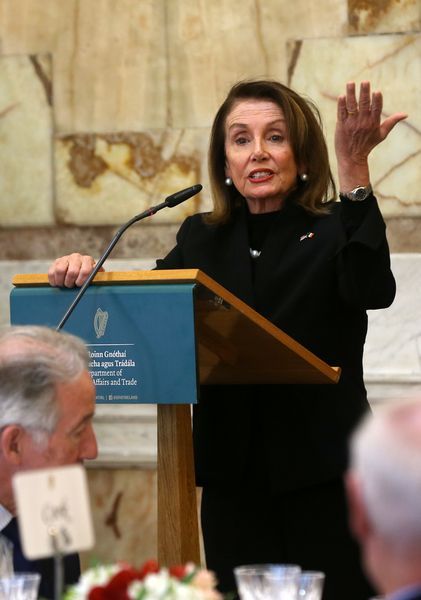 Speaker Nancy Pelosi during a 2020 visit to Ireland RollingNews.ie photo

House Speaker Nancy Pelosi has warned the British government not to meddle with the Irish Sea Protocol.

And in a verbal broadside aimed across the Atlantic Pelosi has warned that British plans to nullify parts of the Protocol could endanger any future U.S./UK trade deal.

Pelosi has spoken along these lines in the past but her latest warnings, in a series of Tweets, comes as British Foreign Secretary Liz Truss seems intent on shredding the agreement that sees Northern Ireland remain in the EU's common trade area and no hard border on the island of Ireland as a result.

Here are Pelosi's Tweets posted Thursday: "The Good Friday Accords are the bedrock of peace in Northern Ireland and a beacon of hope for the world. Ensuring there is no physical border between the Irish Republic and Northern Ireland is necessary for upholding this landmark agreement, which transformed Northern Ireland."

"As I have stated in my conversations with the Prime Minister, the Foreign Secretary & Members of the House of Commons, if the United Kingdom chooses to undermine the Good Friday Accords, the Congress cannot & will not support a bilateral free trade agreement with the U.K."

"Respectful of the will of the British people and of Brexit, I urge constructive, collaborative and good-faith negotiations to implement an agreement that upholds peace."

"The children of Northern Ireland, who have never known the bloody conflict and do not want to go back, deserve a future free of the violence where all may reach their fulfillment."

The Speaker's words have been widely reported in British media, including the BBC.

The Guardian newspaper reported that "Pelosi’s bluntly worded intervention came two days after the UK foreign secretary, Liz Truss, confirmed that the government was planning to table legislation that would nullify parts of the protocol by exempting some goods moving between Great Britain and Ireland from EU customs checks.

"Pelosi made clear that she viewed the protocol as essential to maintaining the 1998 Good Friday peace agreement which minimized border controls between Northern Ireland and the Republic of Ireland.

"The Northern Ireland protocol was the outcome of negotiations with the EU on how to keep the frictionless border between the Irelands and maintain EU customs boundaries after Brexit."

The report added that Pelosi's warning follows a visit to Washington by the prime minister’s newly appointed special envoy for the Northern Ireland protocol in the U.S., Conor Burns, to explain the UK position to the Biden administration and to Congress, which is to blame the EU for inflexibility.

The report stated: "U.S. officials were irritated however that Burns, having emphasized his close personal relationship with Boris Johnson, had not warned them that Johnson was about to visit Northern Ireland. Burns assured them that no decisions had been made on whether to pursue new legislation, days before Truss made her announcement."

As it stands, the EU opposes change to the Protocol as does the Irish government and a significant number of newly elected members of the Northern Ireland Assembly.

There have been warnings that British insistence on significantly amending the Protocol could trigger a trade war between the EU and UK.