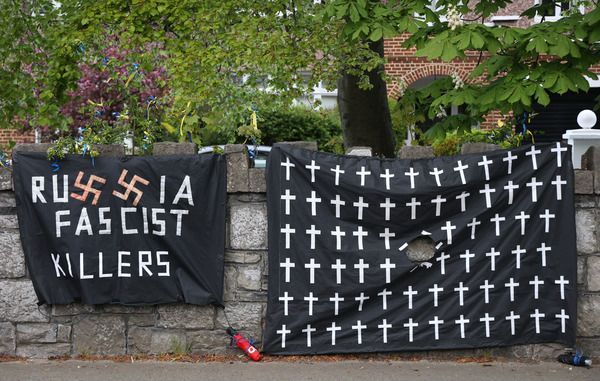 Opinions such as this will not be quickly reconsidered after a Russian State TV broadcast. RollingNews.ie photo

There has been astonishment and anger.

But perhaps not total surprise.

A broadcast on Russian state television - an entity that has been spoon feeding propaganda to tens of millions of deluded Russian citizens for quite some time now - has shown a mock nuclear attack that essentially wipes Ireland off the face of the earth.

Taoiseach Micheál Martin has condemned the broadcast  describing it as “very sinister" and an "intimidatory-type tactic by the Russian Federation."

And Martin has demanded an apology from Russia, its government and state broadcaster, a combination which, these times, amounts to pretty much one and the same.

Said Martin: "I don’t think anybody is going to be intimidated by it. I think it reflects a mindset that is worrying and not in touch with reality. I think there should be an apology forthcoming in relation to that.”

According to the Irish Times, the Russian Embassy responded to Mr. Martin’s remarks about the broadcast with a statement reiterating its stance that “the views and presentations in the TV show are that of the editors." It said Russia’s official position is “that there can be no winners in a nuclear war and that it must never be unleashed."

Fianna Fáil MEP for Ireland South Billy Kelleher said the government should summon Russia’s ambassador, Yury Filatov, to inform him about “our absolute disgust about the broadcast."

He said: “There can be no justification for threatening use of nuclear weapons. Ireland has long argued that nuclear weapons offer no security, and their use would result in devastating humanitarian consequences.

“There is no free speech in Russia so these statements are being made with Putin’s approval."

Added the Times report: The Russian state television broadcast included mocked-up clips of nuclear weapons destroying Ireland in response to the UK’s support for Ukraine amid the ongoing war.

The clips were introduced by Dmitry Kiselyov, a close associate of Russian president Vladimir Putin who is perceived as a propagandist for the Kremlin. Russia-1 is the most widely watched television channel in Russia.

Ireland is not mentioned directly in either of the two clips. In one segment, Mr. Kiselyov speaks of an attack on the “British Isles” as footage plays of the islands of Ireland and Britain being wiped off the map by a nuclear weapon.

Said Kiselyov: “Why threaten horizonless Russia with nuclear weapons when you sit on a small island? The island is so small that just one Sarmat missile is sufficient to sink it once and for all. Everything has been calculated already.

As he says this a graphic shows a blast erasing Ireland and Britain from the map by means of a nuclear trtorpedo that would create a wave 500 meters high.

The Washington Post reported that Kiselyov appeared to be accusing British Prime Minister Boris Johnson of threatening Moscow with a nuclear strike — "a baseless assertion that nonetheless plays well with Russia’s base and its false narrative that the country faces existential threats and is under attack."

As it happens, neither Britain or any of the western allies nuclear powers, the U.S. and France, have threatened Russia with nuclear weapons at any point Moscow's war against Ukraine.

The Post report concluded: "In early 2014, as Russia faced international fallout over its seizure of Crimea, Kiselyov threatened to turn the United States into 'radioactive dust' with a nuclear strike. The Russian arsenal was so menacing, he said in March 2014, that it had turned 52-year-old President Barack Obama’s hair gray."