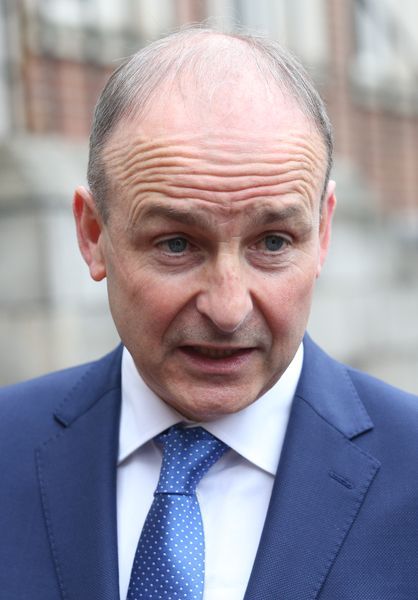 175 years after An Gorta Mór, famine still haunts millions of people around the world, the taoiseach has told the National Famine Commemoration.

Speaking in Strokestown Park, County Roscommon, Micheál Martin also restated Ireland’s solidarity with the people of Ukraine and the refugees from the country who have fled to Ireland.

The ceremony included a wreath-laying ceremony by ambassadors to Ireland.

Looking back at the events of the 1840s the taoiseach said that it was poorer communities that felt the full force of the famine.

“Places which had been filled by unique stories, music and dialects were pushed to or beyond the edge of extinction. In the face of dispossession and pushed to the margins of colonial society, they had survived and retained a spirit and energy which shines through when you look at the collections of poetry, music and tales gathered in the century before the Famine.

“It was a spirit and energy which was increasingly challenging the elite effort to dismiss popular culture and ignore the creativity of a people who bore many burdens but showed incredible strength.”

He said after those dark years of famine Ireland’s national language entered a "rapid decline.'

“Both because of lost speakers and the desperate desire of survivors to leave behind what they felt were marks of the poverty which had exposed them. So, while in the rest of Europe national language revivals were built on a foundation of expanding communities, we lacked that here.

“The clearance of large areas continued at a pace, justified by the stated objective of having more sustainable holdings. What was missing was any attempt to build manufacturing or processing employment which would have provided an alternative to emigration.”

The taoiseach said that the rising nationalist and then republican politics which followed the famine led to independence.

“It was their belief that a self-governing Ireland would have acted to save lives and address the core issue of access to sustainable food supplies.

He added: “One of the greatest economists of the last fifty years is the Nobel prize winner Amartya Sen. He devoted his early career to studying why famines happen. Looking at evidence in all parts of the world and through history he reached a conclusion we should always remember: Famines do not happen in democracies. In fact, there is no recorded account of a famine in a country where the government is freely elected and there is free speech.

“I think if you want to know why Ireland never again had a famine, you will find it in our commitment to self-determination and building a democratic state. Our refusal to follow the extreme ideologies of the 20th century was driven by this commitment.”

The taoiseach went on to say that Ireland stands “steadfast in solidarity” with the people of Ukraine.

“One of the many reasons why the people of Ukraine prize their freedom so dearly is that they too bear deep scars from a famine which destroyed millions of lives. The Holodomor of 1932-33 was a crime against humanity – a famine imposed on what is one of the largest food producing countries in the world.”

He added: “Ireland has opened its doors to the people of Ukraine at their time of need and that crisis has brought home the importance of those who can help others, doing whatever they can to aid those in dire straits.”