Home Dublin should get past Meath 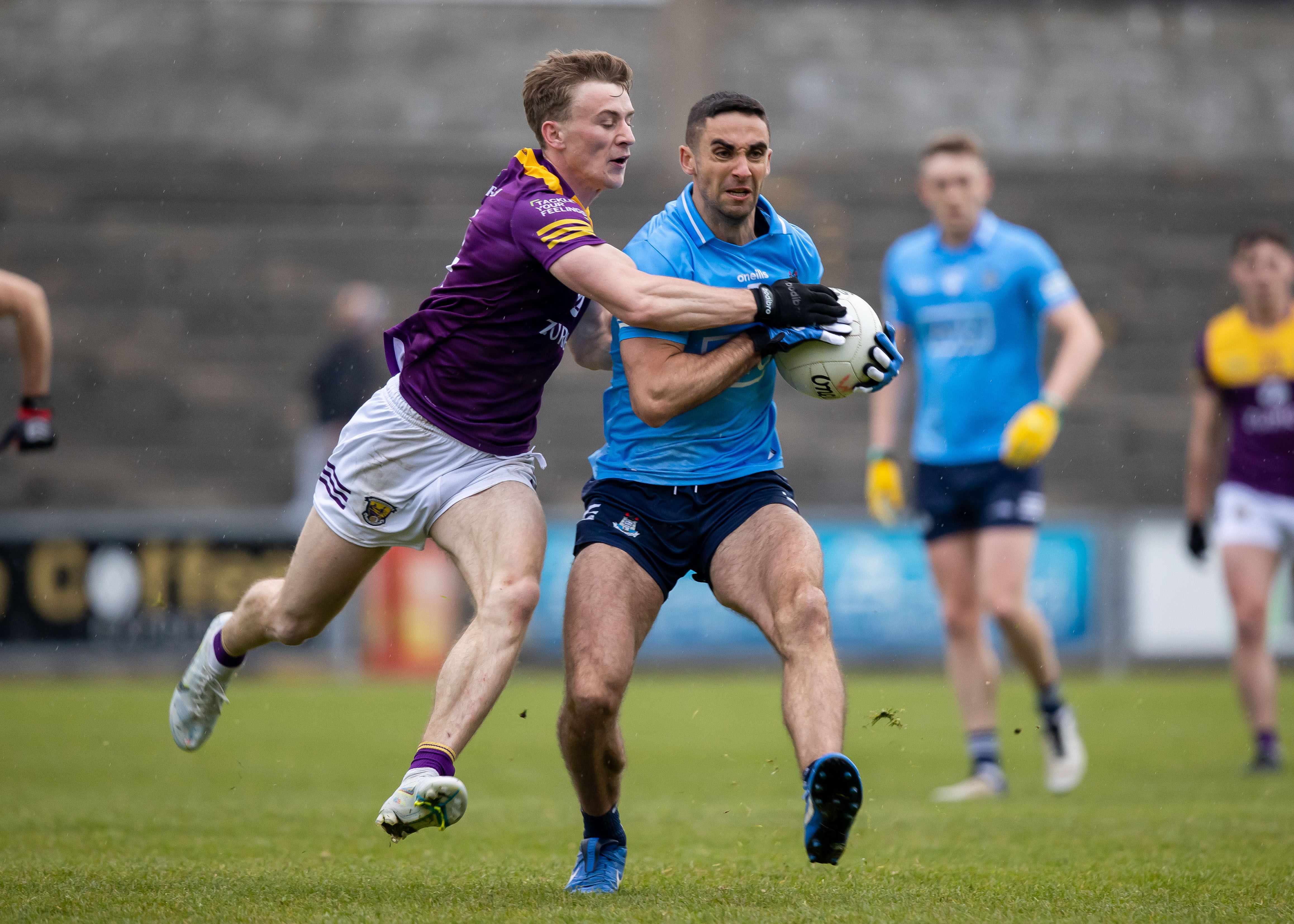 Dublin’s James McCarthy is tackled by Martin O’Connor of Wexford during the Leinster quarterfinal. INPHO/MORGAN TREACY

Dublin should get past Meath

Following Dublin’s impressive win over Wexford in the Leinster quarter-final, the Leinster GAA will be hoping that the Dubs can bring the crowds back to Croke Park. A few weeks back when Dublin were relegated from Division One of the National Football League, Leinster GAA Chairman Pat Teehan suggested that they might play the football semi-finals at provincial venues. Teehan said: ‘‘It would be better to have 20,000 in Portlaoise or Tullamore or Nowlan Park than 30,000 in Croke Park.’’ But with Kildare’s popularity growing and Dublin drawn against old rivals Meath, the semi-finals will be played as a double-header at GAA headquarters on Sunday next.

Kildare had an impressive win over Louth in their quarter-final in Tullamore and Lilywhites supporters will be confident that they can beat Westmeath in the opening game at Croke Park on Sunday. Then it will be like old times when Dublin and Meath clash at 4pm. The Royals were well able for Dublin in the late 1980s and early ‘90s, and nobody can forget the four meetings between the counties in the first round in 1991. The Royals eventually won thanks to a dramatic well-worked goal by Kevin Foley that had them level and then David Beggy kicked the winning point. But Meath haven’t beaten Dublin in the Leinster Championship since 2010 when they scored five goals against them in the first round. That was the last time Dublin had to go on the “back-door” route in the football championship, but if they continue to kick the ball and not over do the hand-passing, I think the Dubs should qualify for yet another Leinster final on Sunday.

There is plenty of football action this week and a big game at the Athletic Ground in Armagh where Derry, conquerors of reigning All-Ireland champions Tyrone in the quarter-finals, play Monaghan. I fancy the Farney County in this one. Meanwhile Tipperary and Limerick meet in the second of the Munster semi-finals in Thurles on Saturday evening. Limerick surprised Clare in the quarter-finals when they showed their skills form the penalty spot after extra time failed to separate the teams in Cusack Park. Tipp will be favorites, but this will be close.

Bernard Dunne has left his role as the Irish Amateur Boxing Association's high performance director. Dunne a former professional boxer, has been on extended leave from the role since the Tokyo Olympics. Dunne lodged a complaint with IABA CEO Fergal Carruth in November after an unsigned SWOT analysis, a strategic planning and management technique used to identify strengths, weaknesses, opportunities, and threats, critical of his performance was circulated at board level prior to Tokyo. Dunne, who was also part of Jim Gavin’s Dublin backroom team, took the job in 2017 and oversaw a difficult period in Irish amateur boxing, with Katie Taylor, Michael Conlan and Paddy Barnes having turned pro after failing to medal at the Rio Olympics. He is the third  IABA High Performance Director lost since Wexford-born Billy Walsh left in 2016 to become head coach at Boxing USA.

St. Patrick’s Athletic are the first League of Ireland club to benefit from Russia’s exclusion from European competition, with the Saints upgraded to the second round of the Europa Conference League qualifying. St Pat’s co-efficient had been set to see them in the first round of qualifying, but the ban on Russia clubs now sees the Saints move into round two. They will be guaranteed €450,000, even if they lose in round two, and would net a ringfenced €850,000 should they progress. The second qualifying round games are scheduled for July 21 and 28. Derry City and Sligo Rovers are still set for round one. Sligo could benefit if Ukrainian clubs are unable to take part with their position unclear as it stands. Shamrock Rovers are set to represent Ireland in the Champions League and are on the verge of being seeded in round one, which would increase their chances of qualifying for group stages. The Hoops are awaiting the outcome of this season’s European competitions and all leagues to be concluded to learn of their fate, with the Russian expulsion also impacting. Elsewhere Scotland will also benefit with champions-elect Celtic going directly into the Champions’ League group stages, bypassing the qualifying play-off.

It looks like Shelbourne will not be sharing the new-look Dalymount Park with Bohemians. The plan was for Bohs to temporarily move to Tolka Park while a new stadium was being built in Phibsboro and then both clubs to share the new Dalyer.  Last week Dublin City Council CEO Eoin Keegan said he would be would be recommending keeping Tolka Park, Shelbourne’s current home ground, for the purpose of sport and not housing development. The City Council may also help St Patrick’s Athletic develop their stadium on the banks of the Camac in Inchicore. There is going to be much discussions among City Council officials in the coming months. Apart from the demolition of the old stand at the School End in Dalymount, no building work has been done at the Phibsboro venue, which has been beset with planning issues since the City Council bought Dalymount Park in 2016.

Republic of Ireland midfielder Jayson Molumby has now joined West Bromwich Albion on a permanent deal after spending the last season on loan there from Brighton. Molumby, who has won 12 Irish caps, had an option in his loan move for the permanent deal to be triggered once he played 25 times for West Brom.  He has clocked up 30 championship appearances for the Baggies this season. And has now signed a three year deal that will keep him at the club until 2025. West Brom manager Steve Bruce said: “Jayson is a young player full of energy and passion and we see plenty of potential in him to grow and develop further. He is only 22 and he has already played more than 75 games in the Championship.’’

Cork Ladies footballer Erika O’Shea is set to become the youngest Irish female player to join an Aussie Rules club. The 19 year-old from Macroom was recently linked with several different Australian clubs and has now confirmed to the that she has accepted an offer and will make the move to Australia before the end of the month. She did not wish to reveal the identity of the club before they make the official announcement. The new Aussie Rules women’s season is poised to start in August and with O’Shea’s club wanting her in Australia for pre-season next month, it left the 19-year-old facing a decision between remaining at home to play with Cork in the All-Ireland championship or taking the opportunity to play a professional sport. She said: “The idea of being able to play a professional sport at 19 and be the youngest girl to ever go over from Ireland, it really excited me and is something I want to give a go.’’

The death occurred recently of  Tom Cunningham, one of the last survivors of Waterford’s 1959 All-Ireland winning hurling team. The Dungarvan native won three Munster senior hurling titles with the Déise. He also won an All-Ireland minor title with the county in 1948, one of three on the ’59 team to do so. Cunningham was a dual star who won Railway Cup football medals with Munster and was a member of the Waterford team that shocked Kerry in the 1957 Munster football semi-final in Walsh Park. Cunningham was also a part of one of hurling’s most famous images, shot by Louis MacMonagle for The Cork Examiner. The photo, taken in July 1962, during a Munster semi-final between Cork and Waterford captured Déise goalkeeper Ned Power jumping high to fetch a ball as Christy Ring pulls hard. The third hurler in the picture, taking the brunt of Ring’s stick across his face, was Cunningham.