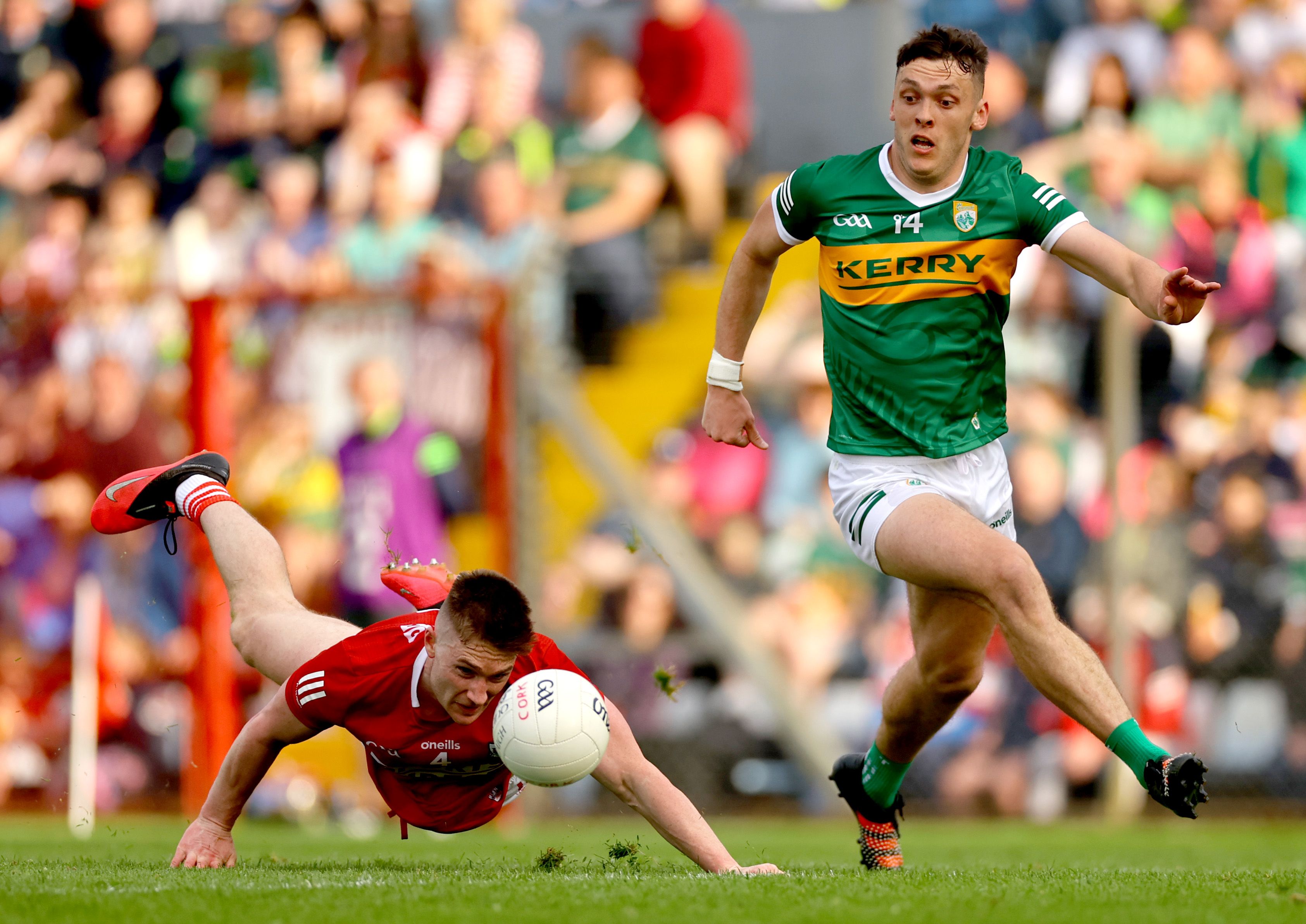 Cork’s Kevin Flahive and David Clifford of Kerry in action during the Munster semifinal. INPHO/JAMES CROMBIE

The GAA are certainly cramming all their games this year. Not everybody is happy with a truncated championship season which will see the All-Ireland hurling and football finals being played in July, but the way the dates are set there is no alternative but get all the games played early and no replays. So for the first time in my memory, we will have all four provincial football finals on the same weekend.

Dublin may not be as good as they were in the Jim Gavin era, but they haven’t lost a championship game in Leinster since 2010 and on Saturday next they will be bidding to win the Delaney Cup for the 12th time in a row when they play Kildare in the final at Croke Park. The Dubs didn’t really get a serious test from Meath in the semi-final, while Kildare were well tested by Westmeath. Kildare did beat Dublin in a National League game in Newbridge at the end of February, but in the wide open spaces of Croke Park I expect the Dubs to make it a dozen Leinster titles on the spin.

Also on Saturday Kerry will be favorites to beat Limerick in the Munster final in Killarney. It will be Limerick’s first appearance in a Munster final since 2012; in the early part of this century Limerick were a match for Kerry, drawing with the Kingdom in the 2004 final and going close on a few other occasions.

David Clifford had a quiet game against Cork in the semi-final in Pairc Ui Rinn, but I expect he will get more sparce in Fitzgerald Stadium on Saturday and it should be an easy win for Kerry. The Limerick hurlers are also through to the Munster final which will be played on June 5; this is the first time since 1934 that the Limerick hurlers and footballers have both qualified for the Munster finals in the same year.

CAN DO IT AGAIN

On Sunday the football championship action is in Salthill and Clones. Ulster GAA supporters love a final in Clones and my old Donegal friend Owen McCann used to tell me that he used to enjoy the short walk from the town up the hill to St Tiernach’s Park on a sunny Sunday afternoon. Sadly Owen, a great GAA man, is no longer with us but his native county are in action on Sunday when they meet old rivals Derry. It’s 11 years since they met in an Ulster final when a young Michael Murphy captained Donegal to lift the Anglo Celtic Cup in 2011. Donegal have won the Ulster final five times this century, but it’s 24 years since Derry triumphed. That was in 1998 when a late goal by Joe Brolly gave the Oak Leaf county a two-point win. Michael Murphy is now the veteran in the Donegal team and still a great leader. Derry have a young team and they are managed by former Donegal footballer Jim McGuinness. So the back room teams will know all about each other’s style of play. I’m going for Donegal.

I would be a bit more confident having a bet on the result of the Connacht final where I expect Galway to be too strong for Roscommon in Pearse Stadium. However, if you were to go on recent form maybe I shouldn’t be that confident as when the counties met in the National League Division 2 final in Croke Park last month Roscommon won by a point. I was at that game and I think Galway will have learned from their mistakes and after wins already in Connacht over Mayo and Leitrim I fancy Galway to lift the Nestor Cup.

Leinster will be favourites to win a fifth Heineken Champions Cup when they meet La Rochelle in the Stade Velodrome in Marseille on Saturday evening, (kick off 4.45) After beating another French club, Toulouse, in the semi-final, Leinster will be aiming to equal Toulouse’s record of five wins. La Rochelle have never won the trophy; their only final appearance was last year when they beat Leinster in the semi-final and then lost the final to Toulouse. But as their head coach is former Munster and Ireland out-half Ronan O’Gara, there is added Irish interest and spice in this decider. O’Gara, then with Munster, and current Leinster out-half Johnny Sexton were great rivals during O’Gara’s playing career. (Sexton missed last year’s semi-final defeat to La Rochelle through injury.) La Rochelle beat another French club Racing 92 in their semi-final. Also last week Leinster confirmed that assistant coach and former player Felipe Contepomi will leave the province at the end of the season to become assistant to former Leinster coach Michael Cheika with the Argentinian national team. ‘Dr. Phil’ won a Heineken Cup medal with Leinster in 2009, but he didn’t play in the final as he suffered a bad knee injury in the semi-final against Munster in Croke Park.

Liverpool will play Real Madrid in Paris in this year’s final on Saturday night. When it comes to the Champions League or European Cup as it known up until 1992, then Real Madrid are the experts. The Spanish club won the first five finals from 1956 to 1960. Real now have 13 wins to their credit, the last in 2018 when they beat Liverpool 3-1 in Kyiv. Celtic were the first British club to win the European Cup in 1967 and Liverpool are the top British club with six wins, in: 1977, 1978, 1981, 1984, 2005 and 2019. It’s a fairly exclusive club with only 22 winners since 1956, with the other English winners being Manchester United, Chelsea, Nottingham Forest and Aston Villa.