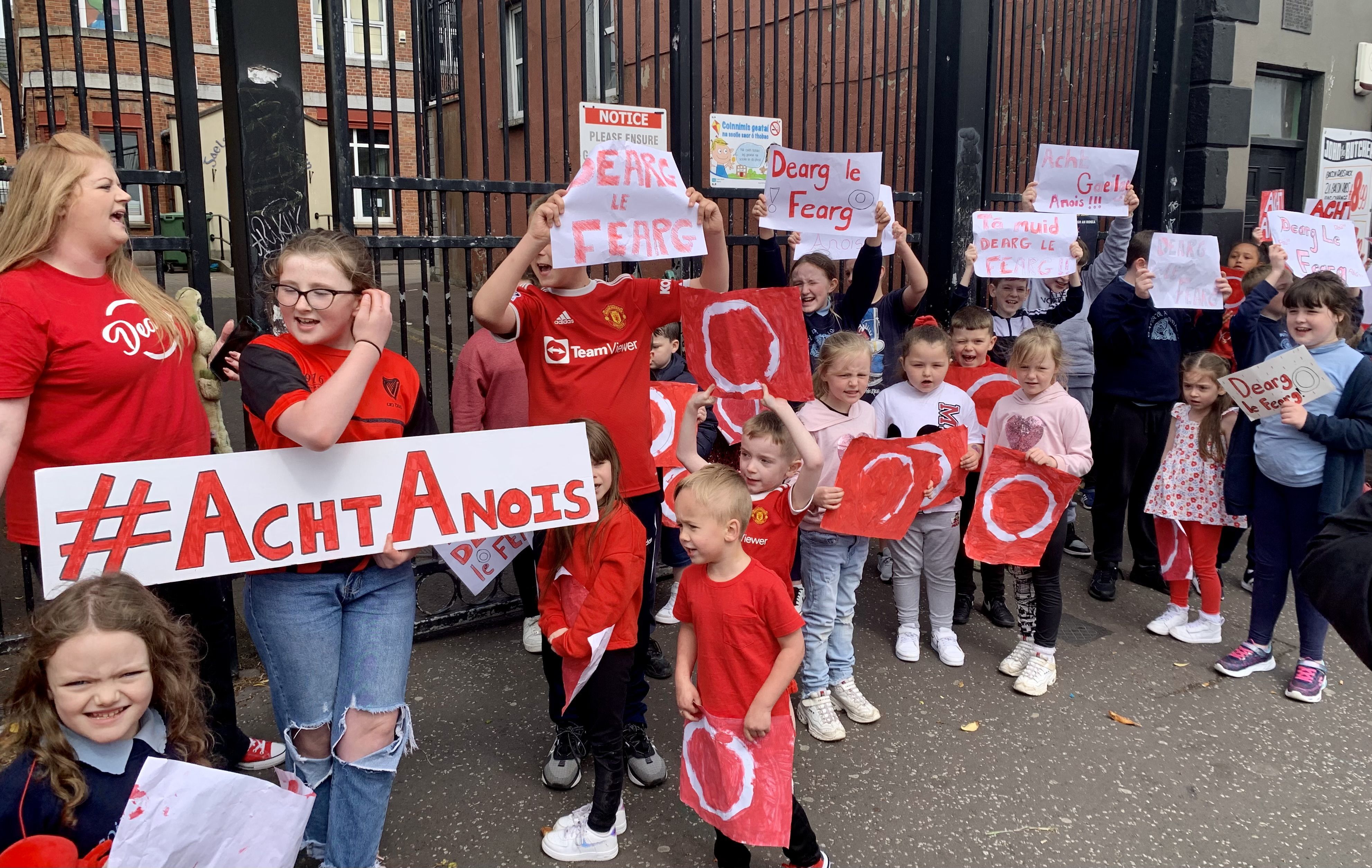 A loud and lively call for Irish language legislation.

As this column goes to print Boris Johnson comes to visit our political leaders in Hillsborough. Whatever he may say or not say one thing is clear. We do not need him to govern us. But more of that anon.

For now, let’s deal with something much more positive. Every day I learn a little bit more Irish. An extra word or two. For me there is a great joy in being able to speak and to read Irish. And to write a wee bit. I especially take great pleasure in speaking in Irish to the growing number of young people I meet every day. They use Gaeilge fluently and naturally. And they correct me when necessary.

Last Friday, scores of children, parents and staff from Gaelscoil an Lonnáin on the Falls Road held a noisy and joyful protest outside their school in support of Lá Mór Dearg and an Acht na Gaeilge. We heard them from the office. Full of craic and fun. And Gaeilge.

This Saturday, May 21, thousands more will join with An Dream Dearg for a march and rally in Belfast in support of Acht na Gaeilge and for the rights of Irish language speakers.

The event will commence at 1 p.m. at Cultúrlann McAdam Ó Fiaich on the Falls Road and make its way to Belfast City Hall. There will be family events and music outside the Cultúrlann from 11 a.m.

The growth in the Irish language and in Irish medium education has been phenomenal over recent years. Despite significant efforts by past British and Unionist governments to suppress the language and indifference by successive Irish governments, the revival of Irish in recent years has gone from strength to strength. Thousands of young Gaels are being educated every day through the medium of Irish.

Nothing surprising about that. Mr Johnson won’t be here at the weekend but I appeal to everyone who supports the right of citizens to respect and equality to join with us. March in support of the rights of Irish speakers. See you on Saturday. And remember use whatever Irish you have whenever you can.

Several trade unions are involved in industrial action in the public and private sectors in an effort to get employers to increase wages and improve conditions for workers. With inflation heading toward 10% some current pay rates are clearly inadequate, especially given the cost of living crisis and  huge increases  in fuel, food and energy costs.

Inevitably, trade union action can have a negative impact on those who rely on their services, and there has been a particular adverse affect on parents with children at special schools. There is an onus therefore on the employers to acknowledge the challenges facing workers and to do all within their power to ensure a sufficient outcome for their employees. They should talk to the workers.

The 51-year-old veteran journalist was wearing a clearly visible press vest and helmet. She was in the Jenin refugee camp covering an attack by Israeli forces when she was shot in the face by a single shot from an Israeli sniper. A second Palestinian journalist, Ali al-Samoudi, was wounded.

A video covering the minutes around Shireen Abu Akleh’s murder was widely broadcast. The Israeli authorities then published a video which they claimed showed a Palestinian fighter firing at Israeli troops. Their claim is that it was he who killed Shireen. This claim was quickly rubbished by other media outlets.

In addition, a researcher for B'Tselem - the Israeli Information Center for Human Rights in the Occupied Territories - filmed the locality and “documented the exact locations in which the Palestinian gunman depicted in a video distributed by the Israeli army, fired, as well as the exact location in which Journalist Shireen Abu Akleh was killed.” Their video is available at: https://twitter.com/i/status/1524346246743396355. It proved that the Israeli claim is bogus.

Subsequently, in horrifying scenes reminiscent of RUC attacks on Republican funerals in the North during the period known as the Battle of the Funerals, Israeli forces raided Shireen Abu Akleh’s home during the wake and then launched a major attack on the funeral. Israeli troops viciously assaulted mourners, some of whom were carrying the coffin. There was widespread international condemnation of the assassination and the attack on the funeral.

Minister for Foreign Affairs, Simon Coveney said: “No self-respecting democracy could stand over this treatment of people.”

He’s right. And no self-respecting democracy can stand back and fail to take action against such behavior. In the week that the Palestinian people commemorate Nakba - the time when more than 700,000 Palestinian Arabs fled or were expelled from their homes as Israel declared its independence - the Irish government should now move to positively use its position on the United Nations Security Council in support of Palestinian rights, recognise the State of Palestine and stop blocking the passing into law of the Occupied Territories Bill.

The iconic Mauser rifle, generously donated by collector Pat O’Hagan, was recently presented to Conor Downes who won it in the raffle held by the Moore Street Preservation Trust. The historic Mauser rifle was part of the shipment smuggled into Howth in July 1914 which armed the Irish Volunteers for the 1916 Rising.

The raffle raised over twelve thousand euro to help fund the battle to save the 1916 Moore Street Battlefield site from destruction by a London-based developer.

Micheál MacDonncha, Secretary of the Trust, and Proinsias Ó Rathaille, grandson of The O’Rahilly who helped to organize the gunrunning in 1914, and who was killed on Moore Street in 1916 leading a charge of Volunteers against a British Army barricade, presented Conor Downes with his prize.

I want to thank all of those who bought tickets and supported the draw. The decision by the planners to accept the developers’ proposal, and the refusal of an oral hearing by An Bord Pleanála, mean that the battle to save Moore Street is set to significantly increase in the months ahead.

The Moore Street Preservation Trust is determined to oppose the Hammerson plans for the area and if necessary take the case to court. This is an expensive process and this column appeals again for people to donate to the Trust’s appeal.

If you wish to contribute to the #SaveMooreStreet campaign, you can do so here: https://pay-payzone.easypaymentsplus.com/fund.../campaign/26