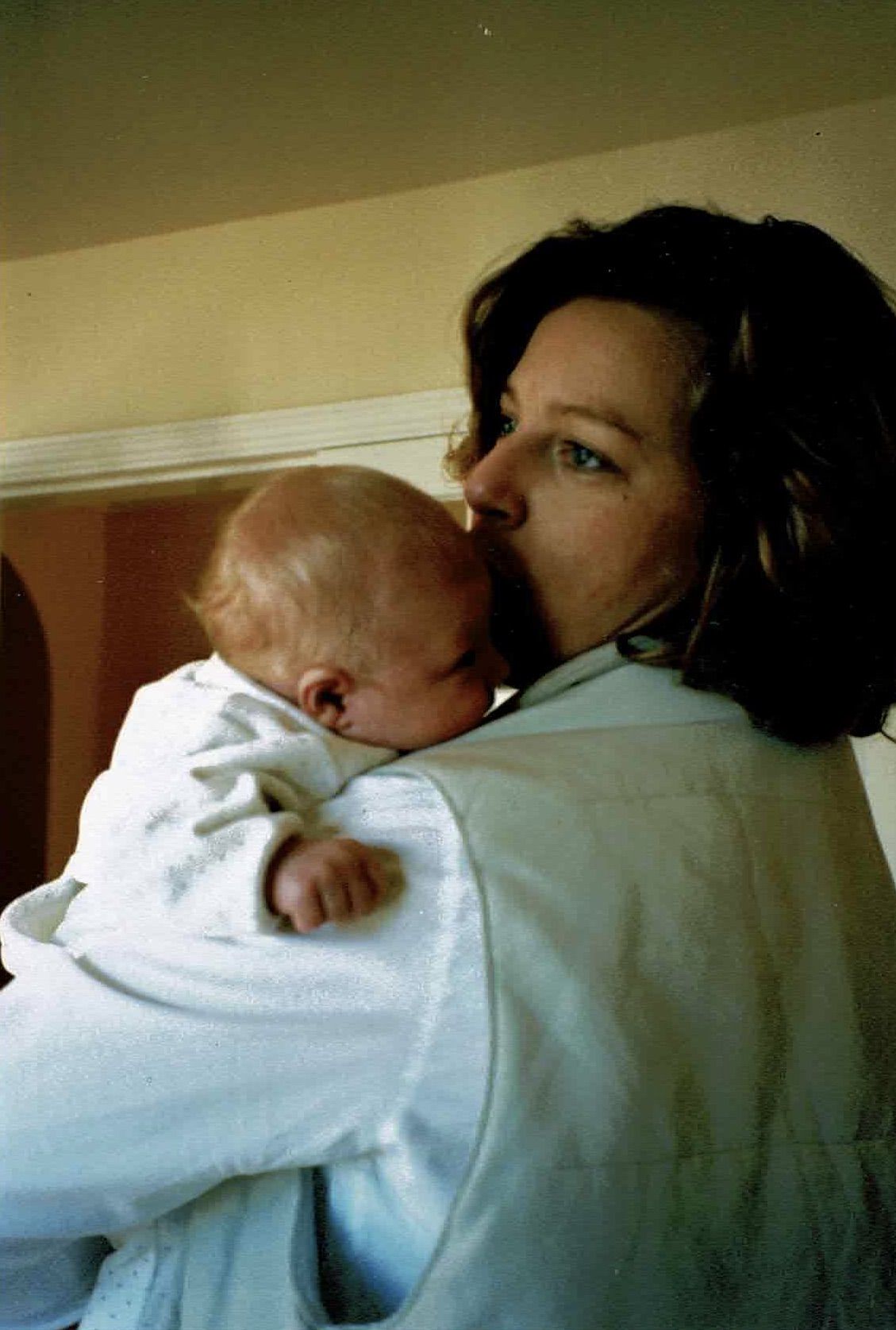 An early photograph of author Rachel Gotto and her daughter Nicola.

When love became more than duty

I had already been in labor for two days. Each contraction brought with it gripping pain but little else. I was determined to give birth naturally but no matter what we tried I just could not bring on full labor.  My baby was becoming stressed, and the heart rate was racing dangerously high. It was at that point the doctor insisted I should have an epidural.

It seemed my unborn child felt safer where she was, and I didn’t blame her.  She was coming into a world that was plagued with grief and misery.  I was 29 years old at the time of my baby’s birth and already a widow. Five months into my pregnancy and just eight months into our marriage my husband had died in a tragic accident, leaving me to face first-time motherhood alone.

The months leading up to the birth were difficult.  Nic’s passing had left me broken. He had been everything to me. We had planned an exciting future. We were going to watch our children grow up, go on great adventures, and live well into old age together.  All those dreams died, along with Nic.

The shock of witnessing my husband’s death had left me traumatized. I became trapped in an emotional hell.  Visceral flashbacks from the accident constantly invaded my mind without warning.   Shock and trauma left my nerves frayed and I osculated between fits of weeping and complete numbness. This is how I prepared for the birth of my first child.

The cruelties of life had already left their mark. A year before Nic’s death, my closest brother passed away after a long battle with cancer. He had only been 28.  I struggled to absorb the truth of my new reality. First Dominic and now Nic. It wasn’t supposed to be like this.  I felt as if I was living in the aftermath of an exploded bomb, surrounded by an emotional debris field.  How would I go on without Nic?  After Dominic, he was the only one who truly understood me.  He’d nursed me through my grief at losing my brother.  He’d become my inner strength and now, he too was gone.

All scrunched up and bruised Nicola began life protesting at being forced into the world.  I looked at her in dazed shock, internally wondering what I was going to do now. Having a baby felt far too much to cope with in my fraught state.

I felt other worldly as my daughter was placed in my arms for the first time. Disconnected from my body, I looked down at myself holding my baby.  I was both compelled and appalled at what I saw. Here was the child, whose impending arrival had only a few months, before spelt hope and the promise of fresh start, and who now served only to remind me of my loss. As I looked her over all I could see was her father’s features. I had no idea what to do. My instinct at the time was to put her away somewhere. I felt empty, I had nothing to give. I needed time to think.

Thrust headlong into learning the ropes of caring for a fractious new-born, that time and space of course never came.  The news of Nicola’s safe arrival heralded gifts and well wishes from so many kind people.  My hospital room was awash with color and messages of congratulations flooded in.  Despite all the well wishes and kindness, I just felt lonely. I didn’t want to be a parent, not now.

Our first year together was miserable. Try as I might, I simply couldn’t feel anything other than duty towards my little girl. The constant dread in my heart meant I felt no peace.  Grief took over and miserably I dragged myself through the long days and sleepless nights.

I knew I loved Nicola and I always took great care of her but that link I was so desperately seeking to find remained hidden. I was fraught with confusion and guilt. I knew it should feel different.  I’d watched guiltily as other mothers squidged and cooed at their babies.  I tried to do that but felt nothing.

And this is the way life continued for quite some time. Nicola grew and developed and easily reached all her expected developmental milestones. At nine months old, though, a red mark on her eye that had been present from birth, unexpectedly and suddenly ballooned in a red liverish bruise.  I immediately blamed myself for it, believing I must have injured her in some way.

The red mark grew so big that it completely covered up her whole eye.  She was diagnosed with a strawberry naevus. I knew I wasn’t to blame; but I couldn’t help wondering if the stress in utero and being born to a traumatized mother might have brought it on. The pediatric specialist recommended that treatment needed to begin immediately. There was a race against time to save the developing sight in my daughter’s left eye.

I was so exhausted. I truly felt as if life would never get better.  Now Nicola had medical issues I was swept up in a continual round of travel for treatment as the medics worked in haste to maximize the chance of saving the sight in that eye. I put the last vestiges of my energy into making sure Nicola got everything she needed. At one point I was driving her two hours to a hospital and back every single morning so she could be monitored.  It was relentless.

As stressful as it was to deal with this new emergency, I had found a purpose.  Nicola, my little girl, needed me and now she needed me more than ever.  Something inside me began to shift at this point. My emotional disconnect began to shift. I was able to breathe again. I had the experience of returning to my body.

Nicola’s changing health had somehow prompted this change.   I felt a type of release flow through me that began to disperse the emotional blankness I’d lived with for so long. To my relief, I began to feel more than just duty to this little girl of mine. A warmth I’d not felt for so long began to surface.  The ice cold feeling in my chest began to thaw and I began to see my little girl differently.

I knew then that I needed her, that I wanted her.  She was all I had left and if anything happened to her, I knew I wouldn’t be able to bear it. From that time on, I held her differently. I noticed the squidgy fat at where her wrist met her forearm. I noticed she was becoming mischievous. I saw she looked like her father and although it hurt somewhat, it did bring the smallest bit of joy into my heart. Finally, I was allowed to love her, finally it was safe to let her love me.

Despite all the medical help it was too late to save the sight in Nicola’s left eye but out of that loss came a far more important gain.  Nicola gained a mother who was able to start the process of beginning to heal from deep grief.  She gained a mother who began to love her more than life itself.  The tight constraints of grief began to give way to a lifelong bond. A mother-daughter connection that is still as tight today as it was when it was formed over 22 years ago now.  Thank you, Nicola, for making sure you reached me. Without you, I’m not sure I would have been brave enough to risk loving anyone else again. I will always be grateful you chose me as your mother.

Rachel Gotto, who grew up in Glandore, West Cork, is a key-note speaker, life coach and clinical hypnotherapist based in County Galway. Her book about her own life-threatening illness, beginning when her daughter Nicola was 6, “Flying on the Inside: A Memoir of Trauma and Recovery,” was published in December. For her essay about the death of her husband and the healing power of the ocean, click here. And click here for website.