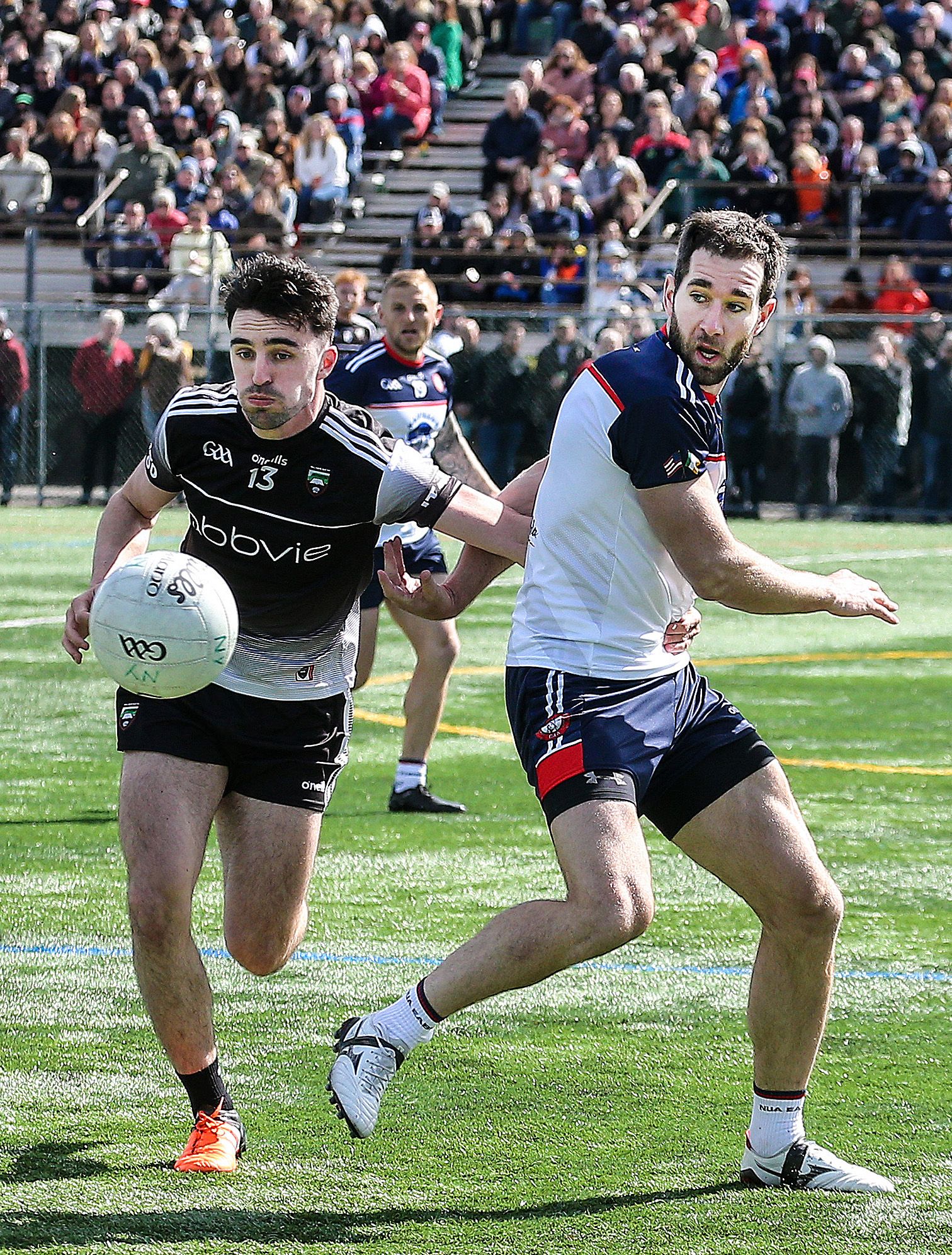 Though the scoreboard shows Sligo clinching victory with four points to spare, the reality was New York were very much in contention right down to the added time when the Yeats County got the extra few points that saw them over the line after a very exciting and entertaining game in almost perfect playing conditions. New York, despite what the pundits predicted, matched Sligo, and sometimes even outplayed their more vaunted opponents, throughout the field for most of the game, and were certainly a tad unlucky as the woodwork denied them at least three occasions, plus Sligo also survived a goalmouth scramble, with the ball going everywhere except over the line.

Meanwhile New York started at a blistering pace, as Daniel O’Sullivan, one of the Big Apple’s most impressive players, had the ball over the bar after20 seconds. In the opening quarter, New York dominated as Jonathon Glynn was using his aerial supremacy very effectively to keep on the offensive. Adrian Varley, the former Galway player, got his team’s second point after Niall Madine was fouled. Indeed, Sligo appeared to be in disarray in the early exchanges as two of their players crashed headlong into each other.

However, after eight minutes, Sligo’s best player, Sean Carrabine, settled his team down, with a very fine individual score.  Peter Fox responded for New York with a fine point after a very patient and methodical buildup. The exchanges were becoming more evenly balanced as Paddy O’Connor got Sligo’s second point. New York then hit a pair of wides before Nathan Mullen leveled up midway in the period. New York were soon back in front as Varley was on target again with Glynn being the supplier. But it was soon all square, as Paddy O’Connor, another player who had a fine game, struck  a beautiful point from beyond the 50 yards line.

Then on 20 minutes came perhaps the decisive score, and definitely the best, a goal from Carrabine. The mid-fielder sliced his way through the defense, and after a timely give and go, was then on hand to crash the ball to the net. Barry Gorman quickly added another score, and now Sligo were four ahead.

New York rallied back as a nice movement involving Colin Keane, Paddy Boyle, O’Sullivan and Glynn set the stage for a Niall Madine point.  Varley would continue to be New York’s main score-getter as he was on target from a mark and a free reducing the deficit to a point. Then when play switched to the other end, a high tackle got Glynn a yellow card and a pointed free from Carrabine. With approximately 30 minutes gone, Niall Murphy, who had been well shackled by defender Jamie Boyle, capitalized on a turnover to get a point. Still New York finished the period strongly as the marauding half-back O’Sullivan sliced and diced his way up for his second score. In added time Mikey Brosnan confidently landed a fine effort to leave the minimum between the sides, 1-8 to 0-10,  at the short whistle.

On resumption Carrabine, Sligo’s chief scorer, got the first score of the second half. Though New York continued to have the preponderance of possession, Sligo were marginally ahead. New York created a number of bone fide scoring chances when they were winning the possession stakes, but wayward shots don’t move the score board. Sligo also fluffed a few chances. New York kept battling as Mark Ellis, more noted as a Rebel hurler, surged forward and drew a foul, which Madine duly pointed to keep the deficit at the minimum. Then Keelan Cawley, one of Sligo’s longest serving players, struck a wonderful point from away out on the wing. Soon, another New York attack ended with a “45” and the resultant kick went from the boot of keeper Cunningham to the safe hands of keeper Devanney. Poor shooting and dropped shots left New York chasing the game, while a soft free from Murphy helped keep Sligo in front.

Still New York maintained their patience and poise and a timely inter-exchange between Colin Keane saw Varley add another score. The Galway man was soon on target again with Paddy Boyle being the supplier, and it was back to a point difference with a quarter left to play.

At this point, Pat Spillane, son of the former Kerry great of the same name, entered the fray, and looked destined to score until Alan Campbell diverted his shot out for a “45.” The resultant kick from keeper Devanney hovered dangerously along the goal-line before being cleared to safety. New York rallied from the let-off and Ellis was unfortunate to see a great effort come back off the crossbar as Sligo began to look sluggish. Then with 12 minutes regulation time left Madine leveled the scores, and Sligo looked to be in trouble as Carrabine, their star, limped off injured. Conor Griffin edged Sligo back in front but Madine quickly restored parity as fans were on their seats with excitement or anticipation of an upset and a first win for New York in this fixture.

As time ticked away, so did New York’s chances. A soft free saw Murphy put Sligo back in front, but then another Murphy came to Sligo’s rescue. This time it was Murphy’s Law, as New York struck the upright for the third time. However in fairness to Sligo’s Murphy, though he had a relatively quiet game, courtesy of his marker, he did land a superb point from a very acute angle free. Now in injury or added time, New York launched a last frantic attack, but a long diagonal delivery was allowed to skirt across the goal-mouth, with nobody there to knock it into the net.

Spillane was having noticeable impact. The sub with Kerry football and Sligo DNA in his blood took off on a scintillating run up field. Well, he was soon grounded as Varley took him down and got a black card for his rugby-like tackle.  New York were now without their best score-getter, and that loss was compounded as keeper Devanney struck the long distance free straight over the bar. Things were now going Sligo’s way as Paddy O’Conner got their last score to finish with a four-points victory.

Granted the score board is what really counts, but Sligo were out-played for long periods by a team that hardly anybody gave a chance of winning. The general perception was that they would do well to keep the deficit under 9 or 10 points. New York were fit, focused and  disciplined, but unfortunately luck was not their main ally.

Great credit is due to manager Johnny McGeeney and his backroom team for their very diligent preparation of the squad and, of course, the application of the players themselves.  After the match I spoke with the great Pat Spillane himself, and he was quite effusive with his comments about New York’s performance. He noted that they appeared to be very fit, quite skillful and well organized, and that Sligo were fortunate to come away with the victory. He also stated that Sligo had a considerable advantage in terms of match practice; they played eight competitive games, while New York were limited to just one challenge match against Salthill. However, the outspoken Spillane claimed to have no recollection of stating a few years ago, that it was absurd and a colossal waste of money and time having New York involved in the Connacht Championship. Apparently great footballers, sometimes don’t have great memories.

Meanwhile the good news for New York is that this defeat does not end their inter-county campaign; they  will travel to Ireland to play in the newly designed competition, namely the Tailteann Games, but their opponents have yet to be determined. Meanwhile Sligo take on Roscommon in the Connacht semifinal. They escaped from New York with a bit of luck, but I feel it will a very different outcome with the Rossies, as they are a team very much in the ascendancy.

Overall it was a great weekend for Irish and Irish-American communities in the Big Apple. It was really a fine Gathering of Gaels, and long may it continue. It was wonderful to meet so many players and acquaintances from decades past. The GAA has always being much more than games — it’s also about community and camaraderie, and that certainly was very evident at the weekend.